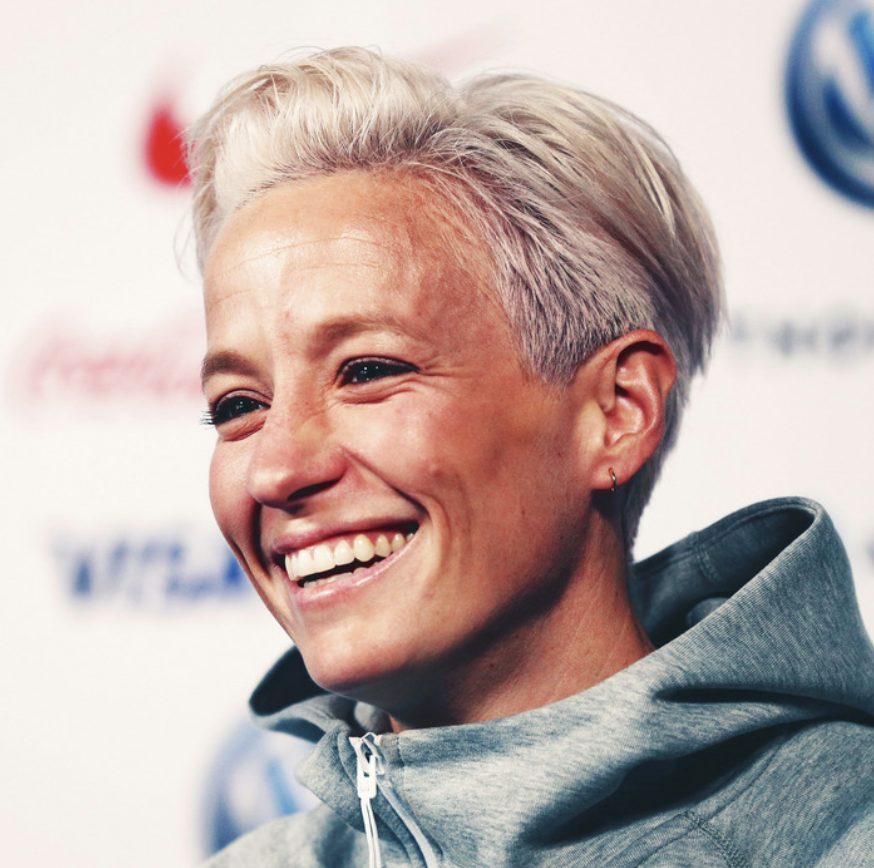 Whether you’re a passionate sports fan, a casual observer or you can’t tell golf from basketball, if you aren’t following the US Women’s National Team (USWNT) as they dominate the Women’s World Cup like the Kardashian’s do a news cycle, then you are really missing out. Admittedly, I am both a soccer player and fan, so I was primed for obsession – but this has truly been a fun run to watch. And not just because these women are insanely talented athletes who broke U.S. and world soccer records in the first game of the tournament, or because they have mastered the art of turning goal celebrations into subtle yet magnificent shade. No, it’s been fun and obsession-worthy largely in part to one star player: Megan Rapinoe.

Before this World Cup, if I were to define my positioning along the sexuality spectrum, I would have secured my spot somewhere entirely surrounded by dick. Now – consider me officially on the hunt for the Megan Rapinoe to my Sue Bird. And I’m not the only one. Women everywhere (and the internet) are going wild for Rapinoe. If you are already on the Rapinoe bandwagon – then hello friends. (If any of you have purple hair, can sink penalty kicks in your sleep and won’t stand for the National Anthem – please dm me). And if you aren’t already on board, let me explain the reasons why you should most definitely hop on in time to watch Rapinoe and USWNT in the World Cup finals on Sunday.

1. She’s not going to the f*cking White House.

Last week, President Trump threw yet another Twitter tantrum in response to  Rapinoe stating that she had no interest in visiting the White House if the USWNT were to win the World Cup.

Reporter: “Are you excited about visiting the White House if you win?”

“I’m not going to the fucking White House.” – @mPinoe pic.twitter.com/sz1ADG2WdT

Rapinoe has been an outspoken LGBTQ rights activist and critic of the current administration, and is a former kneeler/current abstainer from singing the National Anthem before matches, so this is both not surprising and also amazing. And in true presidential fashion, Trump responded like a toddler deprived of dessert – tagging THE WRONG MEGAN RAPINOE in a rant inviting the USWNT for a visit but questioning their ability to win. And also for some reason, mentioning a decline in “Black unemployment”.

Anyone who can get under Trump’s skin like this a hero in my book – especially someone who can pull off purple hair, back to back penalty kicks, and looks like this in a bikini:

2. She almost single foot-edly carried the USWNT to the World Cup Semi-Finals.

Rapinoe scored the only four goals for the USWNT during the first two games of the knockout stage of the World Cup, beating both Spain and France – the host and second ranked team in the world. Two of these goals were on penalty kicks. If you’ve never taken a penalty kick, let me try my best to explain the stakes of a PK on the world’s largest stage: Make the penalty kick and you’re a hero, winning the game and the hearts of fans everywhere. Miss the penalty kick and your team is out of the tournament and it’s your fault. No pressure.

To have the poise, composure, and f*cking skill it must take to sink back-to-back World Cup PKs in the back of the net, and follow them up with two more goals against your biggest competitor – all while brushing off the bullying of the world’s most powerful baby man like you’re 2009 Jay-Z, it’s just, I can’t. It’s next level.

Me when I boil water and cook pasta instead of ordering delivery. pic.twitter.com/iN1gl0ZKRy

Rapinoe is a loud and proud feminist and lesbian. Her sexuality is central to her identity as an athlete, and she has said you simply cannot win without gay players, “it’s science”. But she’s not just an idol for queer sports fans – she’s an activist for women’s equality. Rapinoe and the USWNT have been fighting for equal pay for years, and are currently suing U.S. Soccer, the very institution that they are playing their asses off for in the World Cup.

Members of the Women's National Team have earned about $90,000 in bonuses by getting this far in the World Cup.

It’s just, absurd. The USWNT scored more goals in their FIRST World Cup match than the men’s team has in EVERY World Cup run since 2006. Maybe, just maybe, they should get paid the same. Especially since U.S Soccer’s main argument – that the women bring in less money, is about as legitimate as Bran’s claim to the Iron Throne. And is in fact just, not true.

If you’re still not convinced that Megan Rapinoe is the purple-haired goddess America needs right now, then I guess we just have different taste in heroes. Either way, you should tune in on Sunday to watch Rapinoe and squad win their second consecutive World Cup championship – because they deserve your support and also deserve to get paid more.