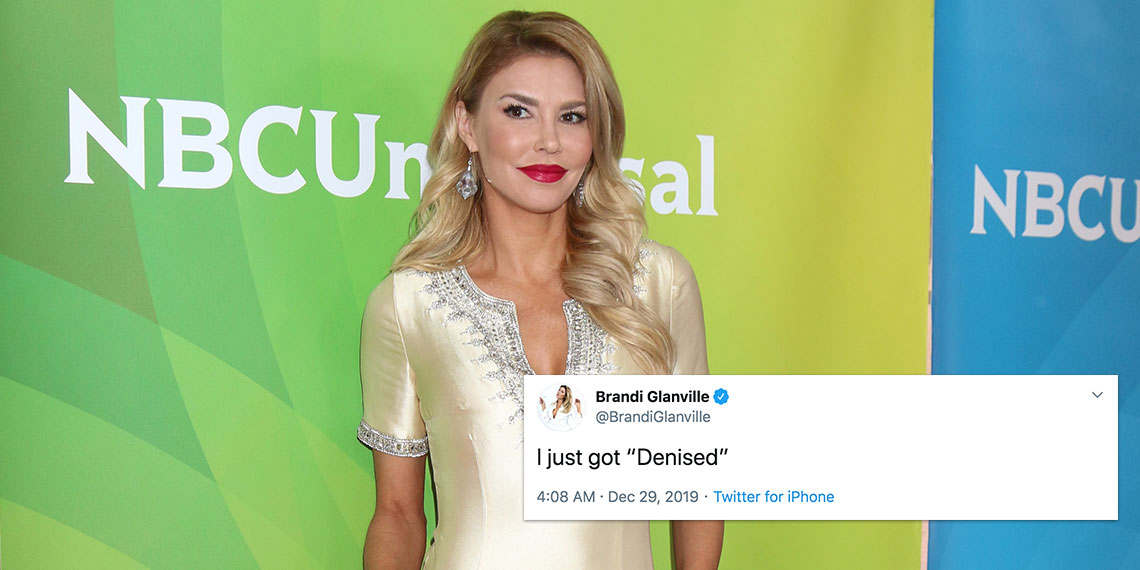 Why Is Brandi Glanville Slamming Denise Richards On Twitter?

We need to talk about The Real Housewives of Beverly Hills. Specifically, the upcoming tenth season, and how there might actually be drama (for the first time in a while). While we don’t yet have a premiere date for the new season, it should be back in the first few months of 2020, and some recent social media posts provide some important clues about what we can expect. Specifically, Brandi Glanville freaked out on Denise Richards on Twitter over the weekend, and we’re trying to get to the bottom of what caused it.

Back in October, we discussed the sources saying that Denise Richards was absent for a lot of filming due to prioritizing other projects. While there was talk at the time that Denise could be demoted to a recurring cast member, that seems not to be the case. We have photographic evidence that Denise already filmed her intro for the upcoming season, so she’s not going anywhere. But with former housewife Brandi Glanville back in the picture this season, it looks like Denise isn’t going to have a smooth ride.

Though Brandi made an appearance on RHOBH last season as Denise’s friend, it appears that their relationship has severely deteriorated in the last few months. Late on Saturday night, Brandi tweeted that she “just got ‘Denised.'” After my initial delight at the messiness of this, I started racking my brain about what this could actually mean. Denise has only been on the show for one season, and she didn’t do anything particularly messy, so what is “Denising” someone?

One person replied asking if it’s what Denise did to Heather Locklear (had an affair with her husband), but honestly, that seems unlikely. First, Brandi Glanville doesn’t have a husband, and second, the Heather Locklear situation happened more than a decade ago, and it feels like Brandi is referring to something more recent. Brandi followed up that tweet with another one, which we can assume is also targeted at Denise.

Okay, so there’s obviously something big going on between Brandi and Denise, and there are some rumors that get at what might have caused it. As Brandi filmed more scenes for the show in the last month of filming, reports surfaced that she told an “extremely damaging” secret about Denise’s husband Aaron, and that “the information was so damaging and scandalous that Bravo is having to run everything through their legal department before they can air it.”

This tweet from the beginning of December certainly suggests that Brandi was up to something:

If you sign up for a reality show any & all skeletons you have in the closet WILL come out eventually you can’t have secrets & expect to keep them EVER !!! so it’s just best to be honest #own it

While these rumors about filming don’t always turn out to be 100% true, it’s clear from the tweets that for whatever reason, there’s bad blood between Brandi and Denise. On Sunday evening, Brandi tweeted her most cryptic and accusatory message yet, suggesting that someone *cough* Denise is trying to blackmail her with some kind of slut-shamey information about her. Brandi is pretty much an open book, so I tend to believe her when she says all her skeletons are out in the open, but you never really know.

Honestly, while blackmail and slut-shaming are obviously never okay, I’m nonetheless kind of excited to see what could possibly push Denise Richards to this point. Last season, she wasn’t afraid to make shady comments or get into arguments, but we never saw her truly go head-t0-head with anyone. Whether you want Brandi Glanville back on the show or not, you know that she likes to fight dirty, and it should be interesting to see her get into it with Denise.

But while we’re discussing RHOBH rumors, it sounds like Brandi isn’t the only one who has issues with Denise. Allegedly, the other housewives have been less than pleased about Denise’s spotty attendance during filming this season, and it could become a main issue on the show. A report from Reality Tea claimed that Kyle Richards planned to make Denise the main target of the season, much like what happened last year with Lisa Vanderpump. According to the report, Kyle told Brandi about the plans, and Brandi then tried to warn Denise. Sounds like she didn’t take it too well, hence all the shady tweets from Brandi.

And even though filming for season 10 has concluded, it seems like the drama is continuing between Denise and the other ladies. A couple weeks ago, Lisa Rinna called Denise out on Instagram for skipping a party at Dorit’s house. In true messy Rinna fashion, she masked her shade as concern for Denise’s wellbeing. Subsequently, Camille Grammer called Lisa out on Twitter, saying she should’ve reached out to Denise privately, rather than “throw your friend under a bus.”

You guys, I hate to get my hopes up too soon, but RHOBH might actually be good this year. With Brandi back in the mix, and Rinna seemingly back to the messiness of her earlier seasons, it looks like we might finally get another taste of what made this show so great in the first place. At the very least, it seems like we won’t have to sit through 14 episodes of arguments about why Erika didn’t wear underwear that one time. And for that, I am thankful.