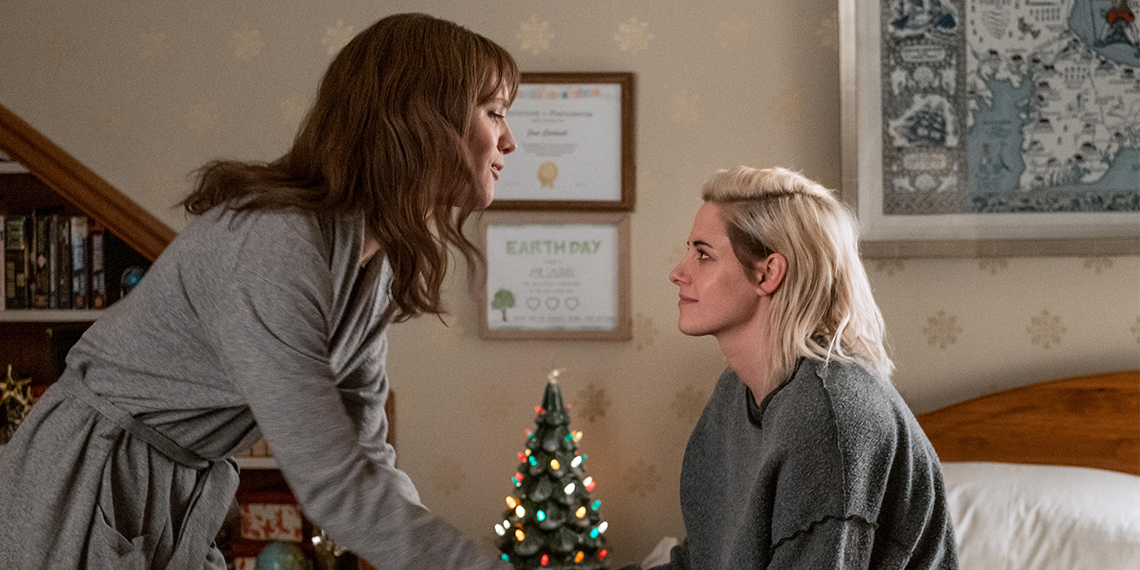 As someone who holds a lot of sentimental value wrapped in familial guilt for the holiday season, Christmas movies are a staple in my household during this time of year. There’s something comforting about watching a movie filled with red and green or silver and gold where people do things like play in snow and you know for a fact that things are going to turn out well. Kevin McCallister is going to outsmart the burglars. Cameron Diaz will find true love at a cottage in the English countryside. The Grinch’s heart will grow three sizes. It’s all good stuff, and I’ve seen most of these a million times, so as much as I love the oldies, I’m also on the lookout for new, fresh material, especially when it features a demographic I have a lot of experience with. In this case, that’s lesbians who are nervous to introduce their significant other to their weird families. Enter: Happiest Season on Hulu.

Happiest Season is a love story featuring two lesbians, Harper (played by Mackenzie Davis) and Abby (Kristen Stewart), and the story of how Harper invites Abby to her house for Christmas without telling her family they’re together or that Harper is, you know, gay. If that sets off major warning bells in your mind, that feeling is correct. There are some heartwarming moments, and as a Kristen Stewart fan, I love watching her awkward expressions, and I also loved to see a decent amount of making out and on-screen affection. Is there anything gayer than having sex with your significant other as quietly as possible in the basement of your parents’ house while you pretend to still be interested in your high school ex-boyfriend to make your mom happy? That’s being home for the holigays, man. It takes me back.

That said, even Kristen Stewart’s awkward charm cannot save this movie from its tired and borderline offensive plot, which is centered on Harper not being out to her family. In the beginning scenes, Harper first told Abby that she had come out to her parents, that she’d told them she was dating Abby over the summer, and they’d taken it really well. It is not until they are driving to Harper’s hometown for Christmas that she admits not only that she lied about telling her parents about her relationship with Abby, but she’s not actually out to them at all, or to anyone in her hometown. It was at this point I would have caught a ride back to my apartment. I’m just saying, if someone ever admits they’ve been lying to you for months not only about telling their family about your relationship, but also about being out of the closet at all, and then tells you to “act straight” while you’re home with them, they’re maybe a sociopath or deeply repressed, and you should run while you can.

My question came somewhere in the middle of this movie, when Abby and Harper are at a party at a country club (this movie is really, really white, in case you hadn’t already gathered that), and Harper is being paraded around as part of her father’s mayoral campaign while Abby hovers and attempts to appear straight in the background: why does this have to be the conflict the whole movie revolves around?

To clarify, there’s nothing inherently wrong with not being out to your family. The coming out process is indeed, as pointed out by the incomparable Daniel Levy, different for everyone. The timing of that kind of decision is a personal one, and it completely differs from person to person. There’s no way to know when the time is right, and it depends on a lot of factors. The issue I have with Harper is not that she’s still in the closet—it’s that the movie revolves around the reductive plot device of someone who’s afraid to come out, resulting in her lying to her girlfriend about just about everything. It’s a major red flag—not that she’s still in the closet, but that she’s tangled in a web of lies about her identity. And when she has a chance to come clean in front of her family and friends and salvage a relationship she’s already dragged down to rock bottom with her, she doubles down on denying who she is, and by extension, who Abby is to her.

Harper’s whole shtick is that she has been afraid to come out as gay her whole life because of all the familial pressure to be “perfect.” Her cover is blown after her older sister, Sloane, outs her at the family holiday party in a scene that makes you cringe and want Sloane arrested. But she still doesn’t admit it—out of fear, Harper denies being gay, again, to the entire party, in front of her girlfriend. Later that night to her parents and siblings, Harper finally admits she really is gay in an effort to save her relationship with Abby, but the responses from her family are still problematic. Her mom responds by telling Harper’s father that she’s always wanted to try karate but has been afraid of embarrassing the family. This is insulting for a couple reasons, but mainly because being gay is not the same as being interested in karate, and also, being gay is not an embarrassing secret. Sloane, the vindictive, sinister older sister, also responds to outing Harper with the truth that Sloane and her husband are divorcing. (I won’t say I don’t understand why.)

To recap, the parallels being drawn to coming out are a secret desire to try karate and a heterosexual divorce. I understand not wanting to tell your family about your marriage falling apart, but let’s all agree that it is still far less taboo and stigmatized then coming out as LGBTQIA+. For this movie to take this topic and then equate coming out as gay with the “shameful” secret of wanting to do karate is, let’s say, not great. It minimizes the bravery that defines coming out and puts it on the same level as a hobby, which feels even more tired than making coming out the central plot in the movie.

I also hate the fact that the movie makes it seem like what Harper puts Abby through is something they have to go through to make their relationship stronger. Being hidden from someone’s family isn’t a relationship milestone; it’s a major red flag that they aren’t ready to be truthful or transparent about your relationship to the people they love.

When the conflict of a gay movie is the trauma of coming out, it denies viewers the chance to watch a relationship play out onscreen that isn’t defined by subterfuge. All the attempts to hide the relationship from Harper’s family are genuinely painful to watch. To watch Abby willingly submit to it is almost harder; it is not the love any of us deserve, and for it to play on a screen as comedy was rough. It makes it so we never get to just watch two women being together and living their lives. It invalidates any love they do have for each other and cheapens everything true about the relationship by drowning it in Harper’s desperation to stay in the closet. We get almost no interactions with supportive family that aren’t toxic (and that don’t involve the movie’s climax being when the main character’s father decides that his daughter being gay maybe won’t ruin his entire life).

While every coming out process is totally unique to the individual and it’s never perfect, falsifying your relationship, lying to your significant other about it, and asking someone who is out to get back in the closet for you is harmful. Even at the end of the movie, where we flash forward a year to seeing Harper’s family depicted as being totally supportive despite some very clear signs that might not have been the case, with Abby and Harper engaged, it didn’t totally feel like an ending we’d earned or that the situation would have wrapped up that neatly. It felt sort of like a happy ending added on to make all the conflict behind it seem worth it, and I’m just saying that if Riley and Abby had ended up together instead, leaving Harper to do some much-needed soul searching alone, I wouldn’t have been mad about it.