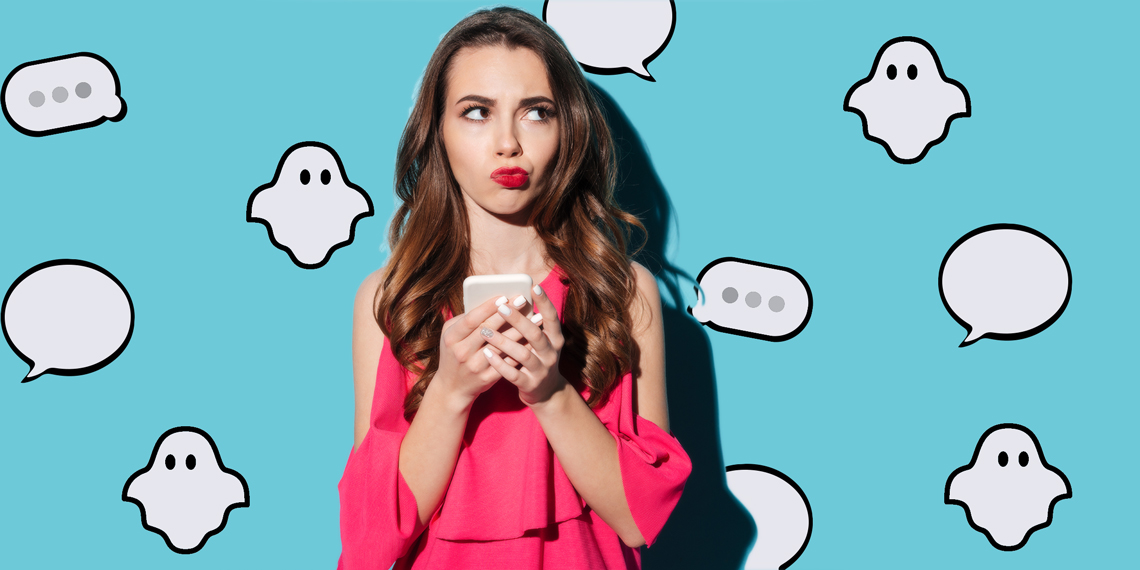 Why Do People Ghost? I Asked A Dating Expert About The Science Behind Ghosting

The last time I got ghosted, it wasn’t so much the sudden ceasing of contact that pissed me off. I had only been seeing the guy for about a month, so while I had grown to enjoy our rapid-fire texting conversations at all hours of the day, usually consisting of rap references and reciprocal roasts, I wasn’t devastated at the prospect of never speaking to him again. It was more the fact that he left me in limbo, still holding on to hope that maybe he was exceptionally busy, or had a death in the family, or perhaps I wasn’t being clear enough about my feelings, and he would come back without missing a beat. Every time I tried to move on, the lack of answers tugged at me to hold on hope a little longer, because surely there was an explanation for this.

The explanation might not be what you expect, according to Dr. Jenny Taitz, clinical psychologist and author of How To Be Single And Happy. In her career as a cognitive behavioral therapist, she’s spoken to ghosts and ghostees alike. She says most people don’t ghost because they’re cold, callous individuals who like to disappear into the night without telling you (okay, so those are more my words and not hers). More often, they’re just afraid of confrontation, and a little immature.

“The thought of having an awkward conversation or disappointing someone is something that people want to avoid,” Dr. Taitz says, “And so they just don’t address the conversation.” They vanish into thin air rather than making a quick phone call to tell you that they decided to get back with their ex, because they “didn’t know how to bring it up,” to cite a totally random example that did not at all happen to me.

But the impulse to ghost goes a little deeper than simply “I don’t want to do this, so I’m not going to do it,” she explains. After all, we all have things we don’t enjoy doing—going to work, exercising, paying our bills—but we don’t all cease to fulfill our responsibilities at the first sign of discomfort. Unsurprisingly, Dr. Taitz believes it comes down to emotions, but more specifically, our opinions about emotions and how they work.

“Beliefs about emotions guide behavior,” she says. She explains that people typically fall into two camps: they believe emotions come and go, or they think emotions last forever. (Obviously, only one of these people is correct.) But if you do fall in the latter (incorrect) camp, it can lead to a behavior called Experiential Avoidance. According to a 2015 report published by George Mason University, Experiential Avoidance “is a regulatory strategy characterized by efforts to control or avoid unpleasant thoughts, feelings and bodily sensations.” This ties right into ghosting: “I don’t want to deal with this conversation, so I just won’t,” but it would also extend to other areas in a person’s life.

Taitz also believes the nature of online dating makes Experiential Avoidance easier to justify. “I think some people, just because of the apps and the number of people they’re meeting, are just not very mindful, and without being very mindful, it’s hard to be empathic. You forget this person is a person. Just because I called them once and I looked at their picture four times, doesn’t mean that they don’t have feelings.” And then, she thinks, once you ghost someone a few times, “we just go into autopilot and we don’t even reflect on it. It becomes almost habitual.”

But this isn’t another article blasting millennials for their poor conversational skills and being afraid to talk on the phone due to the rise of smartphones and dating apps. While Dr. Taitz agrees that new technology has “certainly reduced people’s ability to sit with discomfort,” she insists there’s no one-size-fits all approach to ending a relationship. “If correspondence with this person has been exclusively over text, then I don’t think you need to call someone after two dates to say, ’I don’t see this going anywhere.’” In that case, she thinks a text will suffice. So if you feel tempted to slink away into obscurity and never contact the person you’re seeing again, you might want to reconsider—partly because the conversation doesn’t have to be so formal and daunting.

But there’s another reason you should reconsider ghosting: while you might feel better in the short-term not having to type out that “I don’t see this going anywhere” text, agonizing over it, deleting it and re-writing it five more times, sending it, and then having to deal with the response, you’ll actually just feel worse if you avoid action altogether. Dr. Taitz sees it all the time with her clients. “Ghosting is not only more painful for the person ,” she explains, “but it will also lead you, the ghoster, to feel shame and guilt.” And that guilt, she insists, will feel way worse for longer than the momentary anxiety of ending a fling.

And there’s science to back that up, too. That same report from George Mason University, after having 89 participants keep a daily diary of Experiential Avoidance tactics, their overall affect, and events, found that daily Experiential Avoidance predicted a higher negative affect. It also predicted participants feeling less enjoyment of daily events and lower meaning in life. Yikes. Experiential Avoidance is referred to by psychologists as a “maladaptive emotion regulation strategy that leads to a lower quality of life and worse emotional and psychological well-being.” In non-scientific terms, when you’re ghosting someone, you’re really just playing yourself.

Dr. Taitz is not wrong—I’ve definitely ghosted people, not even that long ago. I know, I am the garbage I wish to stop seeing in the world. Recently, there was a guy I went on a five-hour marathon date with. He was perfectly nice and we got along great, I just didn’t feel any sparks. I kept extending the date, dragging us to bar after bar, in the hopes that with more time (and alcohol), they’d finally appear. They didn’t. I felt bad about it, but didn’t want to text him later saying, “Hey I had a good time and I know we spent half a day together and we kissed” (I KNOW) “but I’m actually not feeling anything more than a friends vibe so I’m just gonna ride off into the sunset by myself”? So when he texted me asking if I wanted to get lunch, I made an excuse about being busy and then didn’t reply to the follow-up. I still feel bad about it. We live in the same neighborhood. I could run into him at any time. It would have been so easy to say “Thanks, but I just wasn’t feeling a connection. Hope you find what you’re looking for,” but I didn’t.

Did ghosting that one guy make my life worse? In the sense that I still feel guilty about it and regret not just being honest, yes. And for what? Five seconds of relief where I could temporarily put off sending a quick rejection text? It’s not like an honest answer would have seen out-of-the-blue, either—the dude literally gave me an out, and I chose not to take it, for reasons still unknown.

“There’s nothing worse than guilt,” insists Dr. Taitz. When contemplating how to end a brief relationship, she says, ask yourself: “Are you willing to feel a little anxious to spare yourself from guilt? Are you willing to feel a little awkward to be a nice person?” In the end, ghosting someone is akin to procrastinating—you might feel relieved in the moment, but as time goes on you’re going to feel way worse. “It’s a trick,” she says. “You’re not avoiding discomfort. You’re going to feel sh*tty.”

Dr. Jenny Taitz is the author of How To Be Single And Happy: Science-Based Strategies For Keeping Your Sanity While Looking For A Soul Mate.