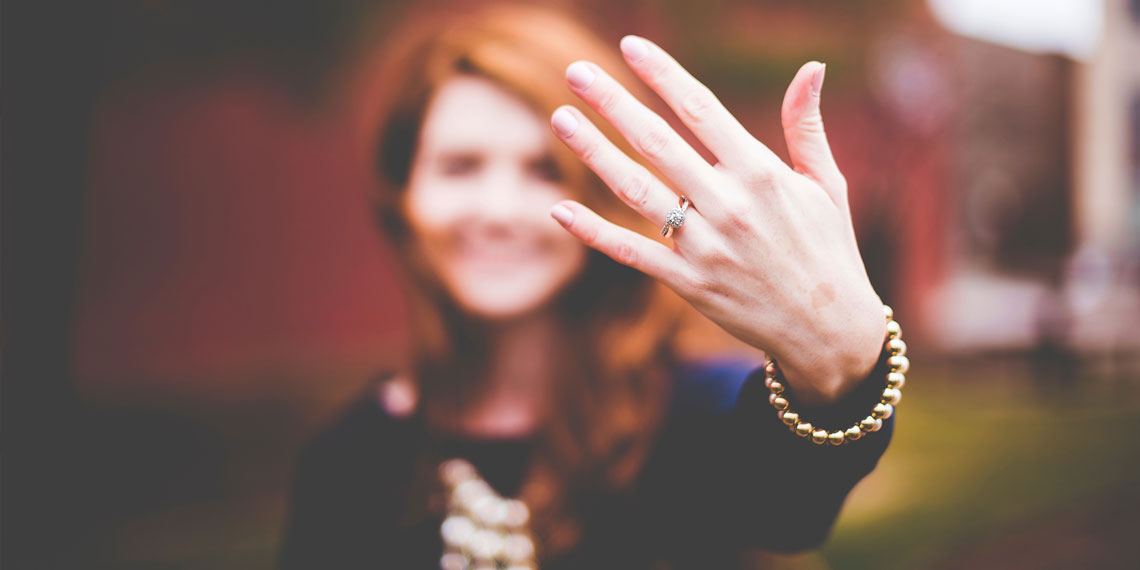 Which Engagement Ring You Should Get, Based On Your Zodiac Sign

So like, what kind of engagement ring do you want? Your answer is either “I haven’t really thought about it,” or “A 2 carat round cut moissanite and diamond halo engagement ring in rose gold, duh” and there is LITERALLY NO IN-BETWEEN. You either know absolutely everything under the sun or have never even looked at more than two photos of engagement rings. Here’s a guide to which engagement ring you would be obsessed with, based on your zodiac sign, so you can either a) find your perfect ring or b) start a fight in the comments because you got irrationally furious at a stranger on the internet who took a made-up science to lightly suggest what kind of diamond cut your single ass might be interested in. Oh, and side note: just make sure not to accidentally drop this information while on a Hinge date or something, because you will come off as 100% psycho.

An Aries fiancée will def be super transparent about everything they want when it comes to an engagement ring, and well…anything else in life. They’ll also freak tf out if they don’t get exactly what they want, so it’s important to pick a flawless engagement ring. (Another warning: an Aries will want to ball out on the wedding. So, it better be bougie.) They are also drawn to classic styles, so go for something like a massive round brilliant diamond set on a band of even more diamonds.

Taureans are very invested in fashion and design, but they’re also highly practical people. Like, when Cardi B said “I could buy designer, but this Fashion Nova fit,” every Taurus was like, making a mental note to make that their next Instagram caption. An engagement ring with a Marquise cut diamond is perfect for a Taurus, because the cut of the stone makes a statement and actually makes lower carats appear larger. It’s like, the TJ Maxx of engagement rings. Also, this cut can make your hands appear slimmer. It’s kind of like contouring for your fingers. (If any YouTubers are reading this… please don’t get any wise ideas and try contouring your fingers. I’m tired of your sh*t.)

Geminis have a tendency to change their minds and style frequently, so it’s probably best to get an engagement ring that is versatile enough to keep up. I mean, if you plan on staying married for a long time, that is. And with Geminis, you really never f*cking know. Fidelity isn’t really…their thing. Anyway, an Asscher cut engagement ring would be perfect, because it’s a style that traditional and modern brides are totally obsessed with.

Cancers have a tendency to be drawn towards…how do I put this lightly? Weird sh*t. You crabby betches love to throw a bunch of random stuff together and call it “eclectic.” It’s probably because you’re mad sentimental, which often results in the accumulation of scarves and bangles that bring up every emotion you’ve ever vaguely felt. Cancers will totally love a colored stone in their engagement ring. Don’t believe me? Prince William (a Cancer) proposed to Kate Middleton with a family heirloom, AKA a sapphire engagement ring that belonged to his mother, Princess Diana, who was also a Cancer. You can’t argue with astrology backed by royalty.

Everybody knows that Leos love compliments and being the center of attention, so opt for an engagement ring that’s super flashy and will spark conversation for life. A flashy ring is twofold for Leos, because they love to be obsessed over by their partners and want random strangers to just approach them at Trader Joe’s and shower them with compliments. A round diamond can include facets that aren’t cut as deeply as some other styles, so they’ll appear to be the flashiest looking diamonds possible, which is ideal for a Leo.

Picking an engagement ring for a Virgo is a disaster waiting to happen. Virgos are extremely picky and critical, but also expect someone else to take care of all of the wedding planning for them. To put it into perspective, Beyoncé is a Virgo. Do you think Bey had the most insanely specific requirements for what her engagement ring, and entire wedding, was supposed to look like? Duh. Do you think she lifted a finger throughout the process? Def not. I’m afraid to even suggest what kind of ring to get a Virgo, but if I had to (I do), I’d advise a classic, super feminine style because that’s what they tend to gravitate towards the most.

Libras are like, these romantic little cherubs who just want to be showered in love. (Read: your friend who’s still single because she has the most unrealistic expectations for her Hinge date.) They’re basically the human version of Taylor Swift’s Speak Now album. Libras love anything that’s traditionally gorg with an interesting twist, so a rose gold engagement ring is probably perfect. Before shopping for a Libra, ask yourself, “Would Lauren Conrad Instagram this?” and if the answer is yes, it’s perfect. (P.S. I know Lauren Conrad is an Aquarius, but her IG aesthetic is sooo Libra.)

Most Sagittarians surprisingly couldn’t care less about a wedding, but feel strongly about wanting an expensive, bougie ring. I really wish that Blair Waldorf was a Sagittarius, because she’s the perfect example here; courthouse wedding with a dress and ring that cost as much as a small country. I mean, her birthday is only a week before Sagittarius season, and she is a fictional character and astrology is maybe just a bunch of made-up sh*t, so let’s just roll with this anyway. The perfect Sagittarius ring is an opulent, feminine style, like this oval diamond.

Scorpios are really known for their own individual styles. They’re constantly feeling offended by Snapchats their friends send them of stuff that they think “is OMG SO you!” but actually isn’t up to their standards. Scorpios really value quality, and are into things that will last them forever. An oval engagement ring might just be perfect for a Scorpio, as it’s sophisticated and timeless, but still pretty unique.

Capricorns are PLANNERS, which is an annoying trait for a friend that’s trying to schedule brunch six weeks in advance, but probably useful if you’re doing something like…IDK, getting married. These betches will probably plan the entire engagement down to the last camera angle they want the photographer to capture during the “surprise” proposal. At the same time, they’re pretty sensible, so Capricorns will appreciate either a ring that is not insanely expensive, or was thoughtfully paid for. They don’t necessarily want someone to drop thousands on a ring just to prove their love. An Emerald cut diamond is ideal for a Capricorn, because it’s simple, but also elegant AF.

Aquarians are freaks about needing to feel like individuals. They always need to feel like they’re slightly more modern and way edgier than everyone around them. A diamond with a Princess cut would be great for an Aquarius, because it’s considered to be one of the edgier styles of engagement rings in the world of weddings. Just like, don’t tell an Aquarius that it’s called a “Princess cut” because they’ll probably flip out over how basic that sounds. Make something up, they’ll totally love it.

Pisces are one of the most creative signs of the zodiac, but they’re also super emotionally nuts romantic. As a result, they’re probably like, telling the calligrapher to put a “whimsical twist” on the invitation guest addressing. Anyway, a cushion or antique cut diamond engagement ring is ideal, because it’s not super traditional, but it’s still very romantic. Whatever that means. I honestly might subconsciously pulled that from like, a Kay Jewelers commercial.