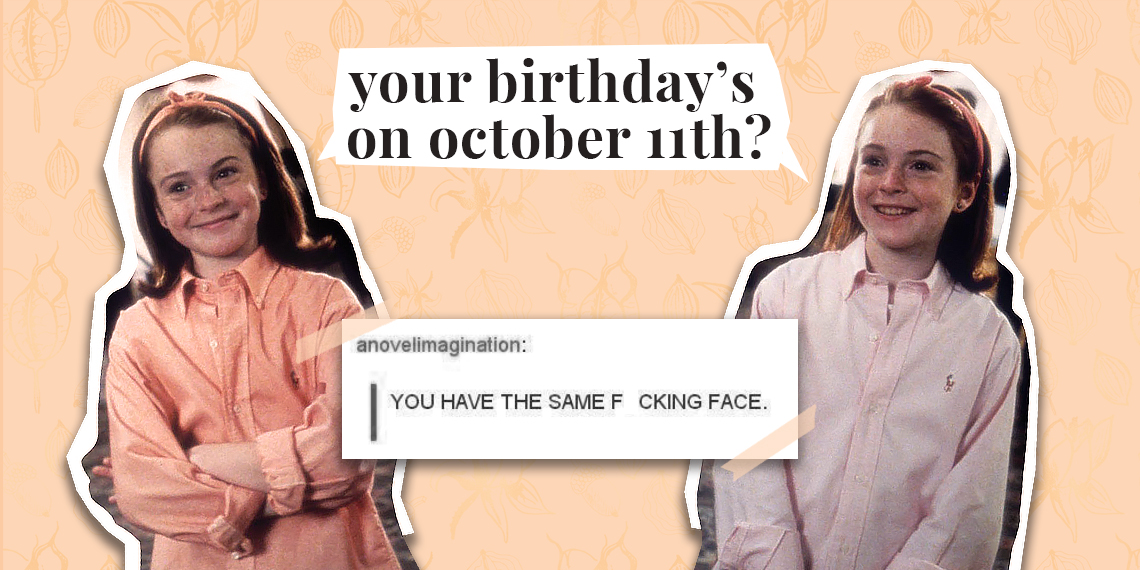 Where Would The Twins From ‘The Parent Trap’ Be Now?

In these times of horrifying politics and environmental disasters, there’s never been a bigger need for some good, old-fashioned nostalgia. One of my favorite childhood movies to revisit is The Parent Trap, the 1998 masterpiece starring my two favorite actresses, Lindsay Lohan and British Lindsay Lohan. Actually, my current favorite actress is vaguely Middle Eastern Lindsay Lohan, but she was sadly not cast in The Parent Trap. The movie had its 20th anniversary back in July, further proving that we are all old AF. But today, October 11, is the twins’ birthday, so I’m feeling extra nostalgic. What happened after the events of the movie? Where did Annie and Hallie go? This is going to be fun.

According to this Entertainment Weekly story, the twins turned 30 back in 2015, which means today is their 33rd birthday. That’s funny, considering actual Lindsay Lohan is only 32, but looks 50. Time works in mysterious ways.

In case you forgot, Annie is the British twin. In the movie, she’s posh AF, and at 12 years old she was already wearing the type of outfits that rich grandmothers wear to attend charity luncheons. Basically, she was living my dream. Fast forward 20 years, and I have a feeling Annie James still has her sh*t together. She lives in London, but has a country house somewhere in England, and also spends, like, a month in the Caribbean every winter. How does she afford all this? Easily, that’s how. She’s now the president and CEO of her mom’s wedding dress company, and yes, she still wears tweed skirt suits to meetings.

Oh, and her husband is very rich. His dad is like, a Lord or some fancy British sh*t like that, and now he has a job in finance that Annie doesn’t actually understand. They have a couple adorable kids (who are mostly raised by nannies), and life is generally pretty great. She doesn’t see her sister that much these days, because, um, I’ll get to that in a second.

Hallie, the American twin, has taken more of an interesting path in life. And by that, I mean that she’s a goddamn disaster. To be honest, Hallie’s life is a little bit like Lindsay Lohan’s, but without the fame. Being that she literally grew up on a vineyard, Hallie developed a taste for wine when she was 14, and she never looked back. She got arrested for drunkenly crashing the vineyard golf cart when she was 19, and then escaped from her court-ordered rehab in the middle of the night. After (barely) graduating from San Diego State with a degree in psychology, she spent most of her 20s getting wasted on various islands in the Mediterranean (mostly Mykonos and Ibiza).

She missed her flight from Ibiza to London for Annie’s wedding, and therefore showed up just in time to get absolutely trashed at the reception. The night ended with Chessy holding Hallie’s hair while she puked, because some bonds can stay strong through anything. Annie, however, wasn’t amused, and she hasn’t spoken to Hallie since. These days, Hallie lives in a small apartment in West Hollywood, where she mainly works on “growing her brand” and “creating content.” She has 320 followers on Instagram.

Maybe by the time they turn 40, these two will have worked it out, but things aren’t looking good right now. Annie and Hallie might not be on speaking terms these days, but The Parent Trap is still perfect and iconic. Clear my schedule for the rest of the day, because I need to rewatch immediately.