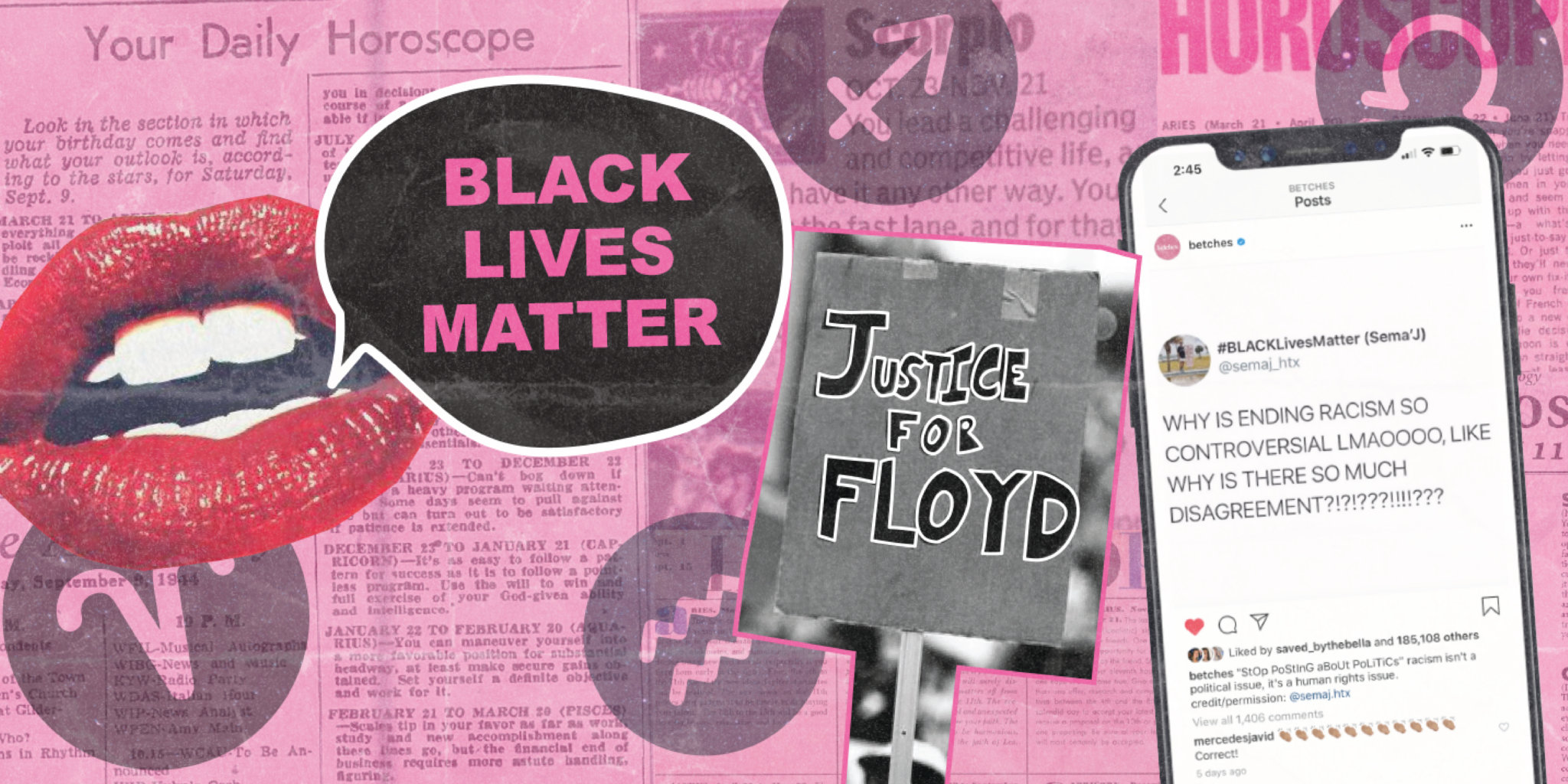 What Type Of Activist Are You: Weekly Horoscopes June 8-11

If you’re like me, your feed has been flooded with opportunities to get involved in the cause of social justice lately. (If not…get a new feed.) People across the country have marched, defied curfews, written letters, donated, marched some more, and even offered to send nudes, all for the cause of human rights. With so many options for how to get involved with the cause of police reform, it can be hard to figure out what direction to go. Luckily, each zodiac sign has its own strengths it can bring to the cause of social justice to help them be a better activist. Because we all have to be activists now, btw. Apathy isn’t cute.

Fiery Aries has no problem activating “get sh*t done mode,” or leading a dedicated team to victory. You’re the one who is organizing friends to go to the march and making sure everyone has their cell phone charged, water bottle, emergency phone numbers, and alphabetized list of call-and-response chants you printed. Just remember, if you’re a white ally it’s best not to actually lead those chants yourselves. It’s a bad look.

Movements can take a long time to actually see change (the Montgomery Bus Boycott lasted 382 days!), but luckily, like with everything else, Taurus is in it for the long haul. Taurus has the determination to do the less glamorous work of activism, like writing their city councilman, calling their state senators, and showing up (either in person or by mail) in every damn election they can. Rome wasn’t built in a day!

Gemini are known for their amazing communication skills, so they’re the ones most likely to be taking on the delightful task of having hard conversations around race with friends, family, and the occasional stranger on Instagram. Gemini’s superpower is translating complex ideas into more digestible ones, and your genuine love of debate means you actually have the stamina to continue the conversation until Aunt Elaine kind-of-sort-of sees why “all lives matter” is an unnecessary statement. Baby steps.

Cancers are the caregivers of the zodiac, and feel most fulfilled when they are directly helping their fellow humans on the ground. Given that hugs are kind of not a thing right now, you’re the person handing out water bottles to protesters or opening your doors to marchers who need to refuel and recharge. And yes, you are more than happy to share your homemade protest trail mix recipe with the group.

Leos know a thing or two about the spotlight, and you’re using your expertise to shine it on Black voices and racial injustice. You’re the most likely to be using your social media to amplify the message of the movement, and being very visible in your support for the cause without fear of losing followers or “messing up your brand.” (Ew.) If a follower can’t handle you at your “Black lives matter” they don’t deserve you at your “check out this cute picture of a dog.”

Virgo – The Smart One

Meticulous Virgo is all about solving problems, so you’ve already probably started educating yourself on the nitty gritty of police reform, local and federal legislation, and the entire history of policing in the United States. It’s been a week. You’re that friend who knows all the legislation that’s on the table and what people are saying about it, from the new Justice and Policing Act of 2020, to the 8 Can’t Wait campaign and 8toAbolition. Oh, and did I mention you can recall important statistics about racial inequality in policing at the drop of a hat? What? Like it’s hard?

I mean, considering the symbol for your sign is literally the scales of justice, you’ve probably been pretty interested in what’s been going on in the world. Diplomatic by nature, you’re particularly gifted at helping bridge divides between people. Pair this up with the fact that you tend to be aesthetically minded, and you’re the sign most likely to be creating helpful, shareable infographics on social justice issues, like how to talk about systemic racism, or how to discuss the protests with Aunt Karen without going f*cking insane.

Scorpios are natural truth seekers and are always asking questions. Recent events might have you going back and re-learning history that was taught to you wrong, or learning Black history that was never taught to you at all. You’re that friend who has low-key watched every social justice doc on Netflix and took all those “social justice book club” posts to heart. Just don’t forget to share what you’ve learned once you’re done!

Sagittarius is basically the wise old owl of the zodiac, so you’ve probably found yourself drawn to social justice TED Talks, writers like James Baldwin, and anti-racist activists like Audre Lorde. You’re the one sharing poignant quotes and helpful context on social media, while also basically teaching yourself your own little Racism 101 class at home. Hopefully you pay a little more attention than you did in college…

Known for their hard work and determination, Capricorns are a great ally to any cause. Also like, you write the checks. Capricorns are the most likely to have budgeted in space for charitable donations, meaning you’ve spent the last week putting your money where your mouth is. Literally. For those who don’t have the expendable cash right now (there is a pandemic, after all) Capricorns are also the most likely to organize fundraising efforts like GoFundMes and mutual aid efforts. And God forbid if you discover one penny out of line…

I mean, talk about the dawning of the age of Aquarius. You are a natural activist and the rebel of the zodiac, meaning you’ve probably been out on these streets since day one. You have no problem challenging the status quo (or your city’s curfew) to make your voice heard, and you are the sign most likely to engage in riskier forms of activism. So yeah, let’s hope that friend who always said they’d bail you out of jail actually means it.

As the most sensitive and empathic sign in the zodiac, you’ve been deeply affected by the pain being expressed across the globe right now. You’re the sign most likely to express yourself through art or to write about your feelings and post about them online. Though please, no interpretive dance TikToks. It’s not needed.