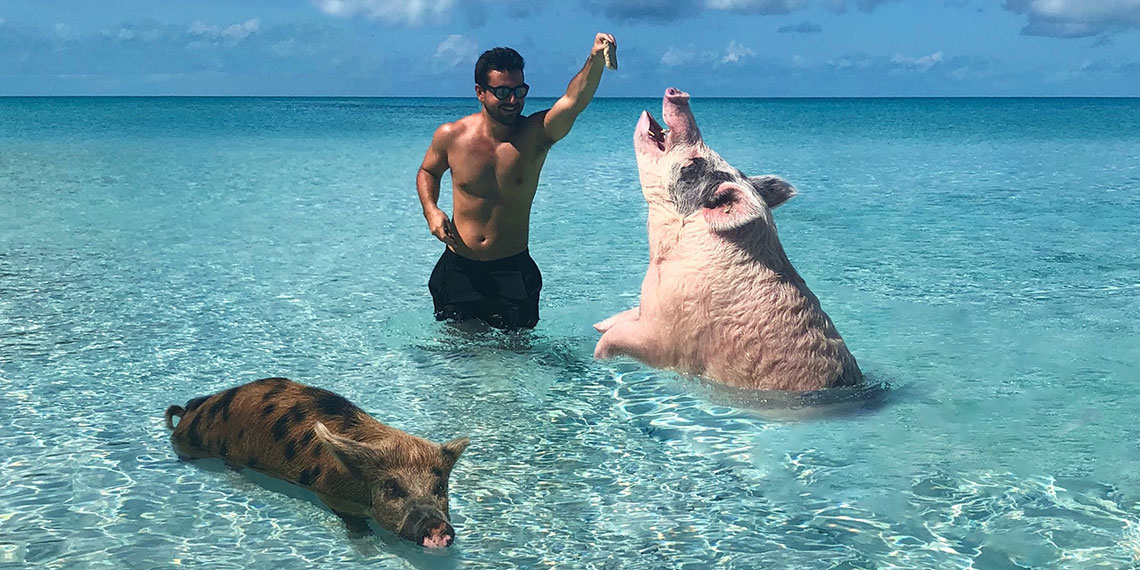 To those who may or may not know, there’s an uninhabited island in Exuma called Pig Beach (aka Big Major Cay) with yes, wild pigs. From what I’ve seen on Instagram (and in the Fyre Festival promo video), it’s a place like no other.

Mesmerized by the surreal photos on Instagram from influencers and pig whisperers alike, I had to visit Pig Beach for myself. The best way to get there is to fly into Exuma and check into Grand Isle Resort and Spa. From the penthouse, you can literally see the mansion Billy McFarland stayed at while Fyre Festival was almost, maybe, trying to be a thing. Through a local adventure company Triple A Adventures, resort guests can book a half or full day on the boat through concierge to visit the pigs, as well as nursing sharks and wild iguanas.

After visiting the infamous pigs, I learned that not everything on Pig Beach ends up on Instagram. And that pigs can’t fly, but they certainly can swim. This is what it’s actually like to swim with the pigs in Exuma.

First, you find yourself in arguably the most beautiful water in the world. Water so clear you’d be a fool to put a filter on your photo. Then you add in a wild pig just roaming the water. The juxtaposition of the two makes you wonder if you’re witnessing real life, or if you died and went to heaven. Approaching the island, I found myself with a dumb smile on my face as the pigs swam up to the boat because it was just the most WTF-is-happening moment.

Once you process that there are about 20 wild pigs swimming around you in the most beautiful water in the Caribbean, then you begin to realize how big they actually are. We’re not talking The Three Little Pigs. That’s a fairytale. These are some big-ass f*cking pigs that went to The Bahamas and not to some market.

Beware Of The Biters

Earlier this year, a video of one of the pigs biting a model’s ass went viral. It’s not exactly glamorous, but it can and does happen to tourists in search of that perfect Insta. “That one’s a biter,” my boat captain warned me. He pointed out which pigs are more likely to bite, as they each have a personality of their own. They’re more intimidating than cute, but in the water they’re moving in slow motion. So worst case scenario, you can outrun a giant pig.

We Fed Them White Sliced Bread To Get The Money Shots

How do you get the pig to jump up on its hind legs for that money shot? Sliced white bread. Bring a lot of it—like, an entire loaf. I definitely didn’t expect that’s what would do the trick, but it worked and was low-key a little scary because I didn’t want a 400lb. wild pig falling on top of me after jumping up to get some Wonderbread.

The Beach Is A Pigsty, Literally

The beach itself isn’t all that glamorous, unless you love the smell of pigs in the heat. It’s literally a pigsty with everything the piggies need, including ample shade, water, and small pens for the piglets. Another thing you might not notice from Instagram alone? Each pig was tagged, as they are registered, and frequently checked up on by a local committee of caretakers made up of residents at Staniel Cay. They’re responsible for maintaining the large enclosures for the swimming pigs, including a special nursery for the piglets, replenishing and servicing the permanent water installation, and coordinating vet visits to the pigs throughout the year.

The piglets don’t like being held by strangers—I mean, would you? Tourists chase them, and they squeal, loudly. I had a camera in my hand and the other pigs on the beach started squealing and coming at me as I was standing between them and my friend holding a screaming piglet. So just leave the piglets alone, okay? It’s uncomfortable, and it’s not worth however many likes you would get on Instagram… and you can’t see likes anymore anyway, so leave the f*cking piglets alone!