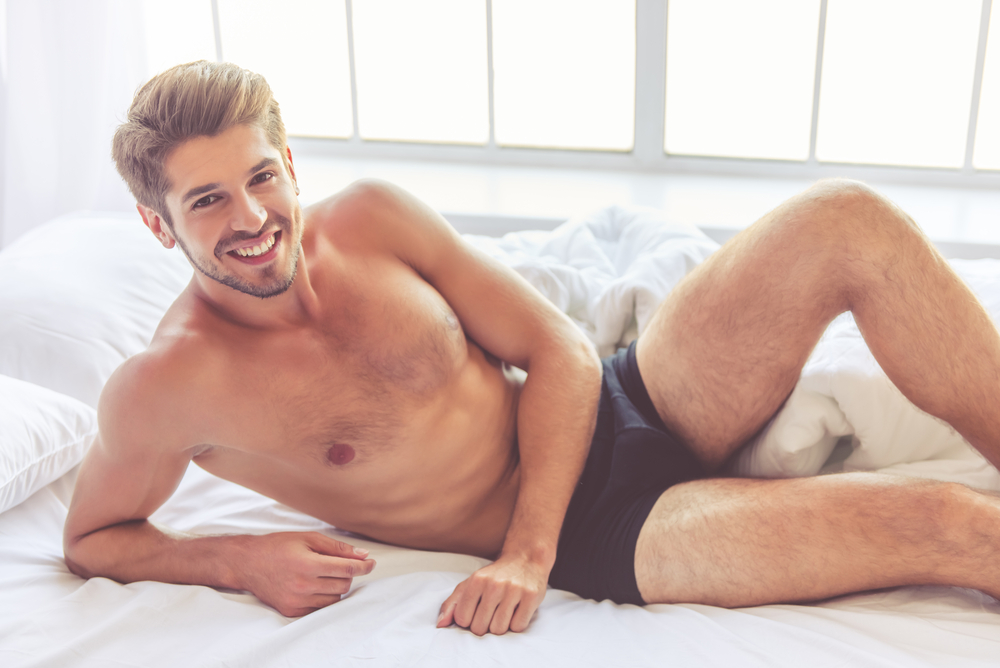 What His Underwear Says About Him

When it comes to men’s underwear, I kind of thought everyone agreed: it’s something you don’t pay much attention to unless there’s something wrong. And when you notice it for a good reason, it’s typically less of a “wow, that’s some breathable cotton” and more of a, “I didn’t realize how good this person looks barely clothed” thing (see: Justin Bieber’s Calvin Klein ad). That being said, my boyfriend approached this topic with a rabid amount of enthusiasm for someone who once held up a pair of baby-pink underwear and said “these started out navy” who’s not particularly into fashion, and he quickly affirmed that what a guy’s underwear says about him does matter. So, since he’s been in “like, a million locker rooms,” and has “seen some shit,” I’ll be peppering in his feedback below. Read on to find out what the underwear he wears to your hookup says about him.

You’re familiar with boxers; you saw them on every guy you hooked up with in high school, and now you probably sleep in them. As suggested by the previous sentence, guys regularly rocking boxer shorts are pretty immature and definitely haven’t taken the time to upgrade their wardrobe to what an adult should be wearing. After all, boxers are too loose/bulky to be worn with pants that actually fit, so this is either a guy who wears shorts year-round or still thinks oversized jeans are “a look.” Also, I’ll go ahead and assume this guy isn’t particularly athletic, since boxers offer exactly zero support; they’re useless for exercise; and they do equally little for showing off a guy’s bod. In other words, he’s either not working with anything he wants to showcase or, yet again, he has no effing idea how to dress himself. Save yourself the Oedipus complex and move on.

I refuse to spend too much time on tighty whities because you, as a reader, deserve better than that. Assuming that we’re working with old-school resembles-a-diaper tighty whities (which is the last time I heard anyone really use this term) and not just a white version of well-made briefs, everything that is true of boxers is true of tighty whities times one thousand. Long story short: any guy who wears this underwear knowing that he might have sex with you doesn’t respect you, and his mom still buys his underwear.

I don’t think I fully grasped the difference between briefs and boxer briefs before today, and damn. Briefs are… brief, as in the smallest possible amount of fabric while still covering someone’s ass and genitals. They are also skin-tight, an underwear feature my boyfriend says is chosen for one of two reasons: “tiny dick” or “big dick.” A website called “The Underwear Expert” confirms that “many are engineered to enhance the package.” Whether a guy is using briefs as the equivalent of a push-up bra, or just wishes he could tattoo WELL-ENDOWED MAN on his forehead, this guy is likely vain in all the wrong ways and least likely to care if you have an orgasm. He’s also the most likely to skip leg day, and spray cologne on his dick “for the ladies.” Obviously, if he looks as hot in them as he thinks he does, you can let this slide.

Boxer briefs are like the buttoned-up aunt of regular briefs—they’re longer (usually covering half the thigh) and a little more forgiving without any of boxers’ “flowing in the wind with a giant hole in front” nonsense. TBH, guys wearing boxer briefs raise relatively few red flags: they’re a grown-up alternative to boxers, they’re tight enough to show off a nice ass, and they’re both flattering and low-key enough to draw a nice line between “he didn’t think about his underwear choice at all” and “he thought about his underwear choice way too much.” Since these can err on the side of being a bit reserved/boring, boxer brief guy probably isn’t the most adventurous (sexually or otherwise) and probably ordered 20 of the same boxer briefs on Amazon the same weekend that he threw out all his boxers.

I’ve saved the best for last here, but fair warning for anyone getting riled by boxer brief description: if you thought I was way off, you were probably actually picturing trunks. Trunks are a hybrid between briefs and boxer briefs, meaning they cover one-third of the thigh instead of half, and I don’t know how guys buy anything else once they know these exist. If guys need a foot and a half of underwear to cover them while playing sports, fine. When they’re showing up for sex, they should step up and flash a little leg, which is not a huge ask given that “sexy underwear” for women covers between zero and ten percent of your ass. Trunks mean he actually tried more than one type of underwear before considering himself stocked for life, and he’s decently aware of what he looks good in. Get yourself a guy who wears trunks.

Not happy with how your fuckboy stacked up in the above assessment? Good news: Valentine’s Day is coming up, and there’s no better way to say “I’m only in this for the sex” than the gift of underwear. Don’t believe me? You’re more than welcome to check out the parade of fuckboys blowing cash at Victoria’s Secret on February 13th for yourself.