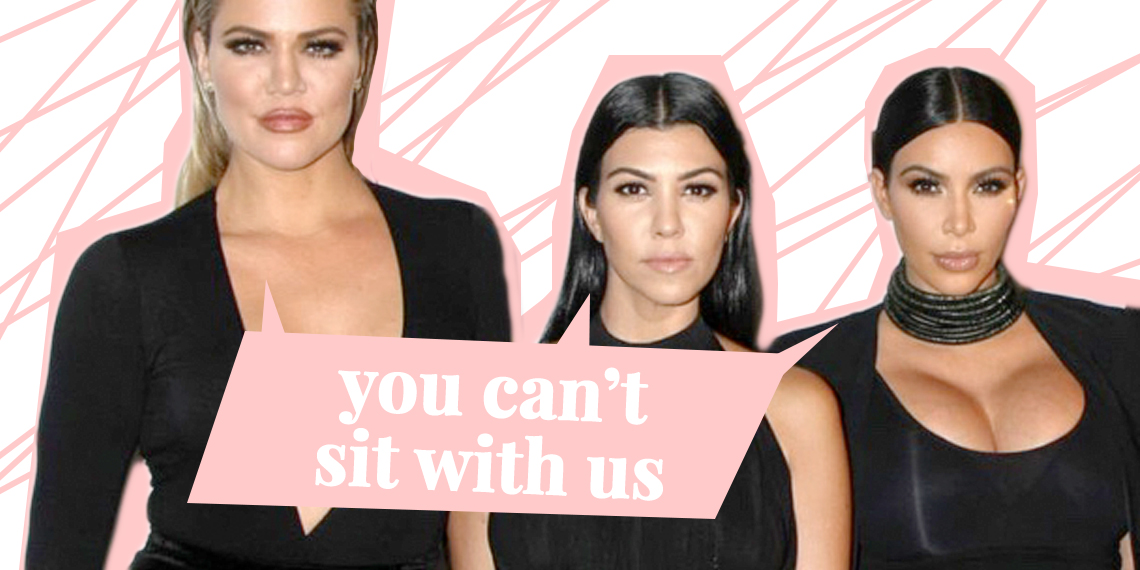 What Happened To The Kardashians’ Former Friends?

The Kardashians are known for chewing up and spitting out men as often as you do with those SugarBearHaircare vitamins the sisters swear by. Those men often fail at life afterwards, to the point where they have their very own curse. I mean, Reggie Bush was so traumatized by the Kardashians that he married Kim’s doppelganger. But the Kardashian Kurse is never really talked about when it comes to their platonic inner circle. Here are some of their former #squad members who they no longer talk to.

The most recent of the Kardashian inner circle to bite the dust, Joyce Bonelli was the famous fam’s makeup artist. While the Kardashians are known for baring it all to the point where we know their nipples better than our own, we’ve yet to see them with a wrinkle or zit, so we’re guessing she was as integral to the Kardashian brand as Kylie’s lip injections. But unfortunately, much like Kylie’s lip injections, she surprisingly got the boot. Word is that Joyce tried to weasel her way into some business deal without including the Kardashians, and that’s when they had a falling out. Joyce denies that she got fired and is all, “Who doesn’t get into a tiff with their friends from time to time?” Okay, Joyce. A tiff between girlfriends happens when Katie pretends like she’s taking a picture of you when really she’s taking a video. A blowout between girlfriends is when Katie posts said video to Instagram and you’re rocking a burrito bloat. Swindling your business partners and besties out of money is fucked up. She’s still doing makeup for celebs like Ariana Grande and Chrissy Teigen though, so clearly she’s still got a great career going.

Remember when Rob was actually hot? Because we barely do. And remember Adrienne Bailon exists? Because we barely remember that either. Anyway, years ago, Adrienne dated Rob and was part of the Kardashians’ inner circle. She was actually on their show quite a bit and the family all seemed to really take a liking to her. To be honest, if she wasn’t on that show, we would really only know her as that chick from Cheetah Girls and 3LW. Anyway, she dumped Rob once he cheated on her (again, bear in mind, this is back when girls would want to have sex with him), but she still remained buddies with the sisters. She even went to Khloé and Lamar’s wedding. Since then, she has said that being affiliated with Kardashians hurt her career. LOL, sure Jan, that’s what hurt your career. Khloé subtweeted her, of course, but since then they’ve reconciled. Adrienne isn’t back in the inner circle, but Khloé follows her on Instagram. As for Adrienne’s career, she’s won a (Daytime) EMMY, which means while she’s still in the Kardashian graveyard, she does still have a pulse. Oh! And Kim tweeted about being on the Cheetah Girls tour yesterday.

Meow (Part 1) https://t.co/jjC9qqlbIm via @YouTube There’s 3 parts! You have to watch

Courtenay was besties with the Kardashian sisters since before they were famous. We’re not talking reality show famous or Paris Hilton’s assistant famous. We’re not even talking O.J. Simpson trial famous. This chick was ride or die since these girls were basically fetuses. And Courtenay was even a little famous at one point too because she was in a love triangle with Lindsay Lohan and Samantha Ronson. Courtenay was at one point a socialite and a regular in the tabloids. But now we don’t have an idea of what the f*ck she does except for being a trust fund baby, so we’re assuming she wrote that anonymous Refinery29 article that reeks of undiagnosed affluenza. But anyway, she’s on the outs with the Kardashians since they no longer follow each other on Instagram. No word as to why they stopped talking, but we’re guessing the Kardashians just forgot she existed like the rest of us did.

Damn, the Kardashian girls really love hanging out with other girls whose names are intentionally spelled wrong. Do they like to bond over getting pissed when other people spell their names the correct way or something? Anyway, you may remember Brittny from the E! reality show Gastineau Girls. And if you don’t, we don’t blame you because it wasn’t that thrilling of a show. Like, even Sunset Tan was more captivating than that garbage and they would give 12-year-old girls the same tans they gave Lindsay Lohan to patronize their stage moms. I watched every episode of Gastineau Girls, and even I can’t tell you a single memorable moment from that show. And that’s probably why Brittny faded into oblivion and isn’t doing much these days. She really only ever made headlines for being part of the Kardashian girl gang, but the only one she is kind of still rubbing shoulders with is Kourtney, who she was on Filthy Rich Cattle Drive with before either of them was a household name. She did mimic Kylie and get over-the-top lip injections though, if that counts as a Kardashian Konnect. But can someone please tell her that Kylie isn’t even into that look anymore?

#TBT to when the Kardashians were step-siblings with the Jenner brothers. Remember when they tried to integrate the brothers onto KUWTK? It just turned into Brody throwing b*tch fits all the time because he still has major beef with Kris since he feels like she boxed the Jenner siblings out of the family. And that’s totally understandable. It was kind of weird seeing Brody get all emotional since he used to play the emotionless f*ckboy on The Hills who really could not give less of a f*ck if girls were fighting over him or that Spencer was totally going off the deep end. He also threw a temper tantrum when he couldn’t bring a date to Kim and Kanye’s wedding, and ultimately refused to attend. Brandon is married to Leah and has a baby with her, Ivy. They have a cloyingly folksy and adorable marriage where I’m sure they drink green juice out of mason jars and go to farmer’s markets. Brody recently got married to Kaitlynn and is a DJ, and for the sake of his apparently fragile ego, we’ll pretend like that’s a legit career.

Monica Rose was part of the Kardashian Klique up until relatively recently. She was a stylist for the family, but she got “let go” because the family’s style was going in a different direction. K, well, it’s really not that hard to buy comically large hoops for Khloé. The Kardashians’ style hasn’t really changed all that much since Monica left, so we suspect there’s something deeper going on. Monica still works with big name celebs like Chrissy Teigen and Cara Delevingne, so her career definitely hasn’t faltered since parting ways.

Ciara and Kim used to be best friends. They did pap walks and filmed KUWTK often, but suddenly Ciara just kind of fell off the face of the planet. We all know Ciara had a thriving career at one point because she churned out bangers that were probably the first songs you grinded to. But her career has kinda faltered since — even Rihanna called her out for that! Anyway, Ciara became kind of a Jesus freak and married adult virgin-turned-quarterback Russell Wilson, with whom she has a daughter. She also has a son from her previous relationship with rapper Future. But based off this video, we’re guessing Ciara’s still got it, and she just released a new song that bangs, so maybe she’s on the up-and-up.

Ciara has not LOST IT. pic.twitter.com/5xGzxbrxKG