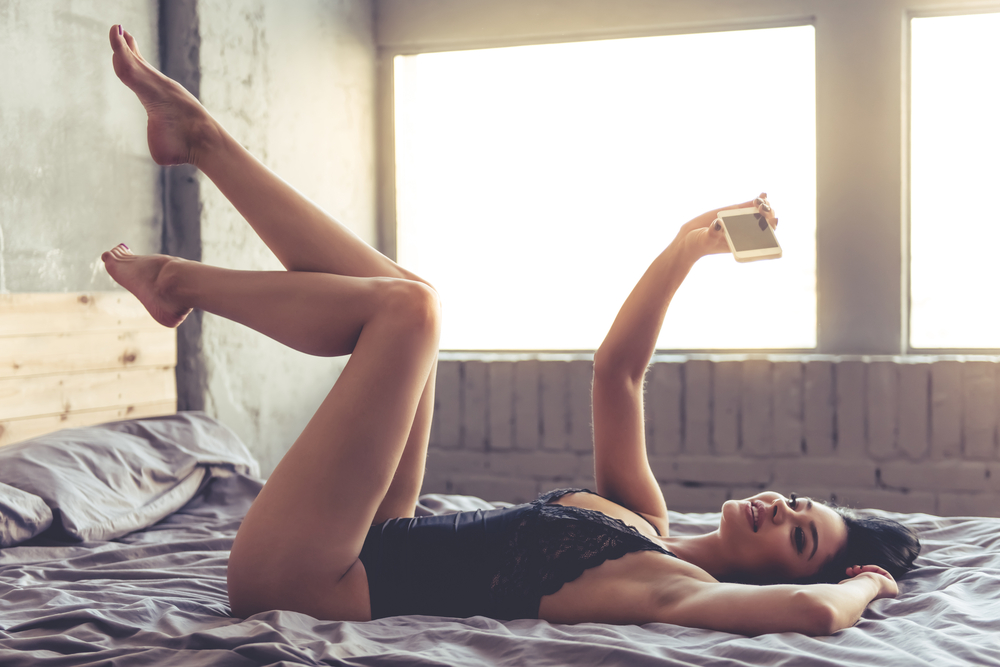 What Guys Really Think Of Lingerie

Hi everyone! I’m a straight dude who The Betches feel is probably a lot like the guy you’re texting/hooking up with. So they’ve been asking me questions in search of straightforward, honest answers that the guy you’re seeing probably won’t be able to give. I’ve broken down the dating apps, one-piece bathing suits, job titles, and sex numbers. So grab that phone, go take a poop (don’t worry, I won’t tell), and enjoy The Betches’ next question for the male mind…

What do guys think of the different types of lingerie that’s out there? Valentine’s Day is coming up. Do they even care?

Do we care? I mean, we have to say yes. You’ve made an effort and lingerie is factually a “hot” way to be dressed. Here’s the issue: if you’re in the room with us and you’re in lingerie, we’ve already made it to the show. As the Pope once said: “For every hot chick, there’s a guy who’s tired of fucking her.” And that holds a bit true for lingerie. It’s cool to see you put the effort in and it’s fun to see you looking great (which is true for all of the choices below), but it’s not really something we will tell our friends about. You know what’s hot to guys? Different. That’s it. We really just want to bang the same girl who looks like 10 different girls (the one guy reading is currently nodding sadly). Guys will be turned on by any of the items below but choose the one that makes you feel the most different. Puts you in a sexier headspace. Makes you feel like the sexual beast you’ve only imagined. Also, throw on a wig. It’s like we’re cheating on you but without ever having to worry about deleting texts.

This is the type of lingerie a girl wears and at some point during, before, or after the sexual experience asks you, “So what do you think of my new bra and panties?!” And we will then lie. We tell you how hot and sexy we think they are and that it’s why we got so hard. They’re really not. You got us hard. You wanting us got us hard.

Ok, now we’re getting closer. The push-up bra is great. The date before the sex is different now. Our eyes are drawn to a new part of your body. It’s like going to the gym and doing a new workout; different penis muscles are being used, and this is a good thing.

Now, there’s this tired narrative that the push-up bra is some sort of lie. I hate that. The push-up is about a new look that gets someone mentally intrigued before the act of sex. It’s about sexuality, and not the mechanics of sex. You’re not getting in the bed and missing the nipple when you go for a lick because all of the lengths and measurements are off. Explain this to any guy wearing a suit jacket to cover his man-tits.

Teddies are fun. But the bodysuit is really hot. I once dated this girl and she was just kind of hanging in a body suit. I thought it was just a tight T-shirt, and then her pants came off, and the shirt snapped under her like some sort of Baby Huey costume. She was walking around my apartment. The cut of the snap part hit her ass in a way that could never happen comfortably at a pool in a retirement community. I think it was her casualness about the outfit and hanging out in it that made the whole thing so hot. But these bodysuits are surprises for guys (again, different!). We really didn’t know they were a part of your world until recently. So we’re very in.

WRITER’S NOTE: This boner memory was brought to you by “I’m disgusting.”

Babydolls are fun. We like the idea of having sex with you while you’re in the babydoll. But do us a favor: call it something else. Let’s just stay away from the word baby from the minute the alcohol starts until about a month after the sex. We know so little about the female reproductive system that we think even the word baby will make one appear.

If you have bigger boobs then I’m going to guess that your guy LOVES your bigger boobs. If not, why he’s with you? It’s the stuff that was in your window that got him to shop at your store. I’m sure if you’re at the point in the relationship where you’re planning something special, like lingerie for Valentine’s Day, then the corset or the bustier is like you bringing back the glory days when those boobs were what he lead with when he talked about how hot you were to his friends. Since then, he’s had to listen to you complain about boob sweat and back pain and nod along with ideas about reductions and whatever non-sex related boob stuff you’ve brought up. These looks are a TBT to better days of masturbating to your Instagram photos from the beach.

The theme of this breakdown has been “different.” And I can understand why some of it may have made you roll your eyes (especially with what the Pope’s said). But I’m just telling you a guy’s initial reaction. There’s really nothing that’s more “different” than the straps and garters and thigh highs. It’s not as much the look as it is the attitude that accompanies it. When a girl wears these things she’s a bit more in control, a little more in charge, and a lot more prepared with the type of sexual experience she wants and isn’t afraid to make it happen. As a guy, this is very hot.

We’re often put in the position of setting up the date, choosing the restaurant, and making the plan because we know that’s what makes you happy. We know that the bar is very low for men, and the fact that we made a plan at all is way better than the 50 guys you spoke to on a dating app before we met who suggested you meet at a bar at “9ish”. So, this change in the power dynamic is a welcome treat. We’re into relinquishing control. We’re into the idea that you’re going to tell us what you actually want. Use this look to find someone else inside of yourself. Someone who isn’t afraid to make demands. Someone who’s … different. Make the Pope proud.