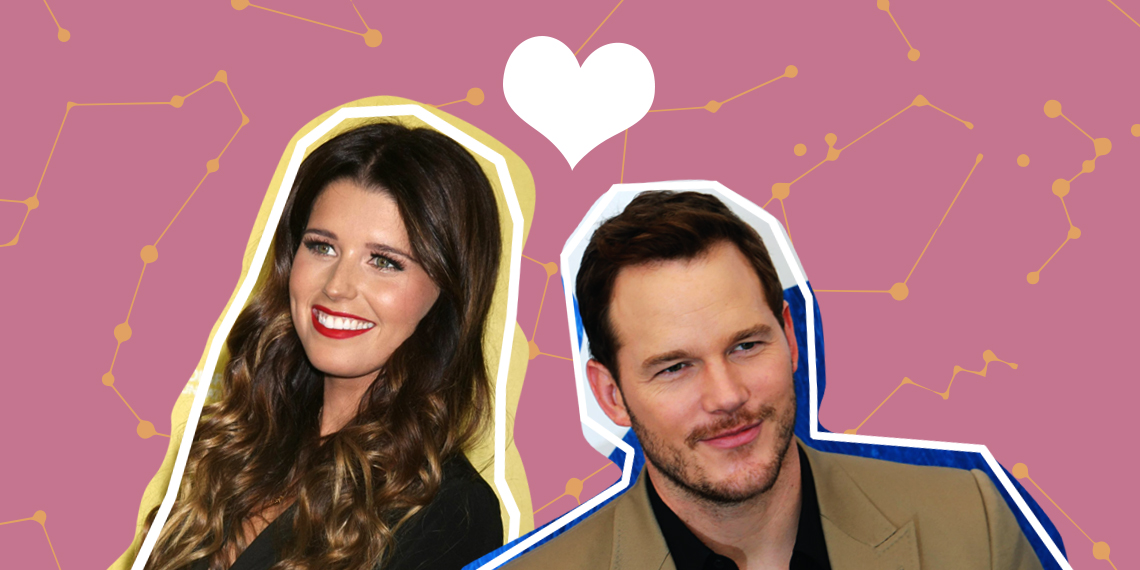 What Chris Pratt & Katherine Schwarzenegger’s Astrology Means For Their Engagement

I hear wedding bells, betches. Chris Pratt and Katherine Schwarzenegger are engaged, and well, you’d think Chris would have waited until the ink dried on his divorce papers, but I guess celebrities are not just like us. (I’m kidding! Even Chris’ ex-wife is thrilled about his impending nuptials, which is totally normal and not at all a façade for the media.) Anywho, according to the Daily Mail, the couple decided to tie the knot after just seven months of dating. And I can’t even get guys to admit we’re together after seven months of dating. Cool.

This, of course, leaves me no choice but to analyze Chris Pratt and Katherine Schwarzenegger’s astrological compatibility before they walk down the aisle. BTW, have I mentioned Christopher is 10 years older than his fiancée? (I am such a fan of this age gap!) Anyway, when I first looked at their compatibility, the first thing I thought was, holy sh*t balls! The sexual chemistry between these two is EVERYTHING, and I’ll tell you why.

For starters, don’t let Schwarzenegger’s salt-of-the-earth vibes fool you. Dare I say, the 29-year-old author is an undercover sex kitten, and a force to be reckoned with. Born with the sun in adventurous Sagittarius, Schwarzenegger is spontaneous, freedom-loving, and a lover of the unknown. To top it off, she was born with Mars (sex drive), Pluto (power), and Lilith (our shadow side) in Scorpio. *Insert shocked emoji here.* FYI: The energy of Scorpio is intensely passionate, deeply emotional, and TOTALLY vengeful—kind of like all your Scorpio friends.

Femme Fatale much? The bride-to-be is a highly passionate woman with a smoldering intensity. On another note, however, her gracious ruling planet Jupiter (luck and expansion) was sitting directly over her moon in sensitive Cancer (emotions and sense of nurture) at her time of birth. I know, WTF does this even mean? Well, for starters, our girl is emotional AF, eerily intuitive, and a true Mommy’s girl. Funny enough, a source told PEOPLE that Maria Shriver (Schwarzenegger’s mother) helped set her up with Pratt. Kudos to Mom.

The Guardians of the Galaxy actor was born with his sun (ego) and Venus (seduction style and type of woman he’s attracted to) in the curious sign Gemini, which also happens to be Sagittarius’ complete opposite. However, this is actually a good thing, as both of these zodiac signs complement each other, and work via the same astrological axis. (Chances are, he fusses over the meticulous details, and she focuses on the bigger picture.) Pratt’s sun and Venus are hovering over his eighth house of sex and regeneration, which means transformation is a prominent theme in his life, both personally and in regards to his relationships.

The 39-year-old actor also has a Moon-Mars conjunction in Taurus (which means the moon and Mars were sitting VERY close at his time of birth) in his seventh house of relationships and acquaintances, which tells me he can be ridiculously stubborn, and confrontational when crossed. Put it this way: the moon represents his emotions, and Mars ignites the fire. Meaning, his emotions can be explosive, and fuel rather easily. On a brighter note, Pratt’s sensuality is strong, and he thrives when he can indulge in the pleasures of life alongside his SO.

Now, astrology is infinite, and there’s a whole other level to each of their birth charts. However, one thing’s for sure, and it’s that these two are INTENSE AF, so you can already imagine what happens when you combine both energies, considering that their personalities are innately polarizing and ruthlessly set in their ways. It’s my way or the highway for Pratt and Schwarzenegger, and I highly doubt either of them would ever compromise. (That’s not a good thing.)

Furthermore, and say what you will, but it’s safe to say Pratt is completely infatuated with his bride-to-be. While this is something you typically expect in a serious relationship, there’s a dark side to it as well.

This could bring intense passion, but it could also consist of ego trips and dark manipulation tactics. Also, and not to keep making this about sex (it’s all Christopher’s fault), but Schwarzenegger’s energy sort of sparked a sexual revolution for Pratt, liberating him in an extreme and profound way.

Sadly, we don’t have Schwarzenegger’s time of birth, so I couldn’t tell you their astrological synastry more in-depth. However, I think by now you have a better idea of their vibe as a couple. It’s Fifty Shades of Pratt, all day.