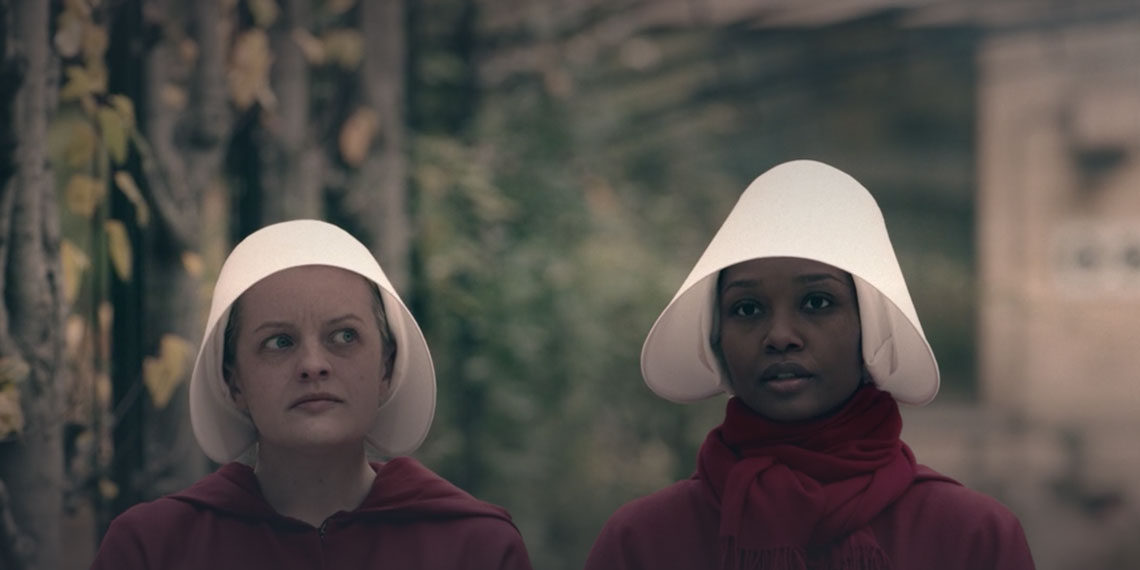 What Are The Rules Of Gilead? ‘The Handmaid’s Tale’ Ep. 2-3 Recap

For this jumbo-sized Handmaid’s Tale recap, we’ll be tackling episodes two and three of season three of The Handmaid’s Tale because Hulu knows if you want to hook an audience you have to let them binge at least three episodes. Are we surprised that the people who brought Gilead to life are this devious?

Speaking of Gilead, does anyone feel like they don’t understand this country’s rules anymore? Sometimes they’re cutting off women’s fingers for reading the Bible too sexily, and other times they’re sending June home from a kidnapping attempt with a slap on the wrist. IDGI.

For example, here are some things that had absolutely no consequences last episode:
-June kidnapping Nichole and sending her to Canada.
-June attempting to kidnap Hannah and getting caught.
-Serena Joy burning her own house down.

I’d be pretty pissed if I were one of the thousands of women season one Gilead executed for looking at milk too long.

Episode two opens on June getting started at her new job. We get a two second glimpse of Janine, which is about a thousand less seconds then we deserved. Where’s that crazy bitch been? I miss her.

June has a new walking partner (OfMatthew) who tells June (and by extension, us) that Gilead is about to “take back Chicago.” Kanye must be devastated. OfMatthew tells June she’s been “praying for the Waterfords” and attempts to talk sh*t about Emily, who has been blamed for kidnapping the Waterfords’ baby. Sadly it seems that OfMatthew is something of a narc.

OfMatthew: I don’t know why OfJoseph would do such a thing!
June: Back up bitch, that’s my best f*cking friend.

OfMatthew f*cks off once June gets to the grocery store, giving her time to chat with OfRobert about the news of the day like the fact that Chicago is lost and all the Marthas are hanging out without them.

OfRobert: The Marthas know everything but they don’t f*ck with handmaids.
June: Oh really…

Holy sh*t, Aunt Lydia is alive! I distinctly remember her being stabbed multiple times and falling down a flight of stairs, but apparently she has risen from the dead. Once again I ask myself, am I watching Game of Thrones?

Aunt Lydia wants to know wtf is up with Commander Zaddy’s wife, Madame Zaddy, and I agree. Is this a Jane Eyre situation? It’s hard to tell. Either way, Aunt Lydia is not into Commander Zaddy at all and wastes no time asking June to tell her if she also gets bad vibes. Then, out of nowhere, Lydia just loses her sh*t and TASES OFFRED. Like, one minute they’re chatting about Emily, the weather, etc…The next minute, Aunt Lydia is all psycho about to light a bitch up. I guess that whole getting stabbed and falling down the stairs thing did have some effect.

Aunt Lydia on her way out: BTW I saw you gossiping at the grocery store.
Offred:

In this scene, Emily goes to the doctor and tbh I blacked out at the words “clitoral reconstruction.” But apparently Emily has high cholesterol.

Oh hell yeah, it’s Martha time. June finds the Marthas plotting to get somebody out and she sees now as the perfect time to infiltrate her new friend group. One of the Marthas has no eye which makes me miss Janine. Where the f*ck is Janine?

June: Owwwkayyyy ladies now let’s get in formation!!! How do we do, fellow Marthas?
Marthas:

Ultimately, the Marthas decide to allow June into their clique for now. They even give her Martha clothes to borrow so she can fit in.

June walking into the forbidden parts of the city:

Martha One: God bless our laborers.
Martha Two: Through we are cleansed.
June: ….ditto.

The plan works great until it doesn’t, and a shot Martha shows up at their house, screaming and making a f*ckton of noise. June, who once had to silently give birth alone, isn’t having any of it and tells her to STFU immediately.

After a very close call with the police, the shot Martha dies and June is forced to bury her body in the backyard alone because Commander Zaddy is “mad” they brought a “fugitive” into his house to let her “die there” or whatever.

In this scene Commander Z also screams “DO NOT PRESUME TO SPEAK TO ME ABOUT MY WIFE!!!” which is def the new “don’t talk to me or my son ever again.”

Cut to: Luke drunkenly ruining dinner because he can’t get his sh*t together, like he’s me at Thanksgiving or something. He’s asking Emily questions about her family even though Emily hasn’t decided if she’s going to slide into her ex wife’s DMs just yet.

Moira: Hey Luke, why don’t you go get the f*cking potatoes and STFU?

Turns out Luke is just sad because Nichole reminds him of June. Blah blah blah the Canada scenes are boring.

Cut to: Emily getting an eye exam.

Emily’s post-Gilead to-do list so far:
1. Go to the eye doctor.
2. Clitoral reconstruction.
3. Find out if family remembers me.

It is under these—and only these—circumstances that any human would ever actually get their eye doctor’s appointment done first. Under any other circumstances you just procrastinate that sh*t until you’re no longer legally allowed to operate a vehicle. Once the eye exam is done, Emily jumps right to #3 on the list, reconnecting with family. Because the clitoral thing is probs gonna take some time.

Serena’s Mom Has Got It Goin’ On: ‘The Handmaid’s Tale’ Episode Three

In between my watching episodes two and three, Kylie Jenner threw her friend a Handmaid’s Tale themed birthday party. Because we all watch Gilead and think, “I want to go to there!” Let’s see how well this episode matches up with Kylie’s fun bday theme!

We open on hanging bodies. Or as Kylie would call them, piñatas. Janine is back, thank God, but we still only get like two seconds of J-time. Bring back Janine! We want our girl! Apparently the rules of Gilead aren’t totally over because the government has been hanging a f*ckton of Marthas for their involvement in May Day.

Turns out that Commander Z is so important that he never has to go to meetings. Nope. He has the meetings come to him. And that, my friends, is a career goal. All the Commanders are over to meet with Z, which unfortunately means that Fred and baby’s penis are also in attendance. Any party Fred is invited to is one I do not want to know anything about.

Fred: Oh, hey June
June: Okay cut the sh*t and tell me everything you know about Commander Lawrence.

June presses Fred for tea on Commander Zaddy and Fred willingly spills it because he is a weak-willed little snot. His big revelations? “We’ve found him hard to read,” and “he doesn’t like to be bored.”

Thanks Fred, you useless f*ck.

Serena And Her Mom

So this is Serena Joy’s mom. Mama Joy. Turns out Serena’s been staying at her mom’s place while she figures out whether or not she wants to stay married to a guy who let his friends cut her finger off. Decisions, decisions. Luckily, Rita has made Serena a very chic blue leather finger to wear around. I’m not kidding when I say this leather finger is gorgeous, and I could honestly see it being the accessory of the season. Kylie really missed out by not giving these out as favors at her party.

Serena’s mother is hosting a casual prayer group at her house, which is the Gilead version of throwing one of those MLM sex toy parties. Just when you think the prayer circle is done, the priest calls in Serena and says he wants to pray for “her marriage.” Even in Gilead, you gotta worry about your mom spilling all your business to her friend group.

Serena: I don’t want to go back to Fred because he let his friends cut my finger off.
Mama Joy:

The conversation ends with SJ’s mom telling her Nichole wasn’t even her baby to begin with. Stone cold, Mama Joy. Stone. f*cking. Cold.

And now for a glimpse into Commander Zaddy’s patriarchy book club. What fun! June is on pouring duty so she gets to hear pieces of the meeting, and whaddya know, NICK is there! This means that Nick has gotten promoted to Commander, and might I just say that he looks great in those Commander clothes? Praise be, indeed.

Commanders: *All laugh at June*
June:

Nick, it turns out, is going to the front lines of Chicago (don’t forget to take pics at the bean!) and he and June bone one last time. I mean, can you blame her? Like I said, he looks great in those Commander clothes.

After the meeting, June checks in with Commander Zaddy to be like “Uh…what the f*ck was that?” and they get in a big fight about good and evil and morality and whatnot. My eyes rolled all the way back into my f*cking skull when Commander Z makes an offhanded remark about “binders full of women” here, which is a reference to a 2012 Mitt Romney quote. What’s next? June looks to the camera and says, “I’m a Nasty Woman!” Maybe Janine will drop a “nevertheless she persisted”? Corny. As. F*ck.

To prove to June he’s right (or just to f*ck with her, I’m not sure) Commander Zaddy brings June to a military facility where they’re holding a bunch of women meant for the colonies.

June: Wtf is this?
Commander: They were supposed to all be killed but I’m sending them to the colonies!
June: That’s still basically killing them tho…
Commander: But I got five of them jobs as Marthas!
June: There are like five hundred people here?
Commander: There were only five jobs!
June: Is this supposed to impress me?

In the end, the Commander tells June she has to decide which five get to be Marthas. Because like a typical f*ckboy, he’s gotta drag her down into all his own bullsh*t.

Next up on the reunion train: Serena Joy! Serena stops by June’s place to trade traumas. This is the Gilead version of when your friend texts you and is like, “Come downstairs, I’m outside and have wine!”

We end with an inspirational montage. Part of it is Serena Joy just like, running into the ocean. She leaves her chic leather finger behind which is good because like, leather def cannot go in the ocean.

And that, is what you do not f*ck with June, my friends. I still miss Janine tho.