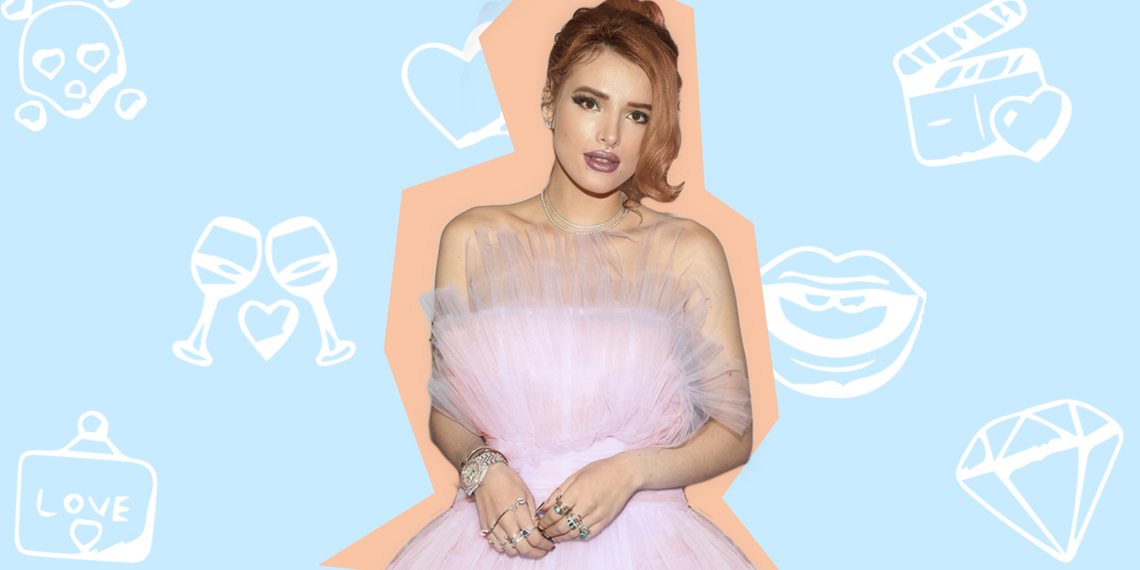 Bella Thorne has made plenty of questionable decisions in her life, but I can’t help loving her. Her particular brand of thirst is less refined than, say, an Ariel Winter or Ruby Rose, which makes her feel like a relatable mess. Sure, sometimes she goes a little too long without washing her hair, but no one is perfect, and shampoo is expensive. Either way, she’s still the star of a show on Freeform and I, my friends, am not. Like I said, Bella is my girl, but something has come to my attention that requires intense judgment: Bella Thorne’s dog is named Tampon.

We need to talk. Bella, honey, why? Now, to get it out of the way, there’s nothing wrong with the *idea* of tampons. The female reproductive system is a glorious miracle of nature, and no one over the age of 15 should give a shit about talking about periods. We’re all adults, it’s not that big of a deal. The miracle of life blah blah blah. That being said, why in the fuck would name your dog after a feminine hygiene product? It doesn’t even sound cute to say! Bella, I need ANSWERS.

Back when she got the dog in December, she took to Twitter to ask her fans what to name him. The two choices were Tampon and Cunty, which is obviously more inappropriate but arguably a better name? Idk, they both suck. Cunty actually won the Twitter poll, but obviously Bella Thorne doesn’t care about her fans, or she realized yelling “Cunty” in public repeatedly will get you some weird looks. And yet, I doubt Bella Thorne cares about the types of looks she receives in public. Anyway, let’s look at some photos of Tampon.

Me and tampon are watching famous in love tonight ???? who else is?

There’s Bella Thorne, hanging out at the pool with some kind of rattlesnake tattoo that I really hope is fake, and her adorable dog, Tampon. It’s such a sweet photo, and it almost makes you forget that this poor dog is going to suffer through its entire life being named Tampon. Ugh, this is making me so mad. That is like, the cutest dog I’ve seen in hours, and I want to follow it on Instagram, but I just can’t do that to myself. I thought Stormi was a bad name, but Kylie’s weather misspellings have nothing on Bella Thorne’s dog name.

In response to some commenters who were similarly horrified by the choice of name, Bella fought back with a truly puzzling reply:

naming her tampon? When did a tampon ever become a bad thing? When did someone buy a tampon and it didn’t come in handy?

Okay Bella, you’re like one step away from the Gretchen Weiners’ deranged Caesar monologue. First of all, tampon isn’t a bad thing, it’s just a fucking terrible name that is not at all pleasing to the ears. And yeah, great, tampons come in handy, I’ll be sure to keep that in mind when I name my next dog Phone Charger or Extra-Strength Advil. If you’re going to pick a name like Tampon, don’t even try to defend it. Just fucking go for it and fuck what the haters say.

This photo, from Tampon Thorne’s personal Instagram, is a LOT. Bella Thorne and her man Mod Sun are walking Tampon in the snow, and tbh Bella’s outfit might be more questionable than the choice of dog name. Bella’s shirt (most likely) says “Bitch I’m Bella Thorne” in a nod to her song/music video that have still yet to be released. The shirt is whatever, everyone needs a catchphrase. But she’s also wearing fishnets, some heels that look like look like reject Kinky Boots props, and a fur/leather coat that looks like what would happen if Hot Topic came out with a costume line. It is truly a look. Tampon probably doesn’t love his name, but he might be even more scared of his mommy’s outfit.

u know what I️ do

So there you have it: Bella Thorne has the world’s cutest dog, but it doesn’t even matter because Tampon is such a horrible name. It is truly a crime against humanity. Or I guess animal kind? Whatever. If you’re getting a new pet anytime soon and need name ideas, just steer clear of Tampon, or Maxi Pad, or any other inanimate object, especially one that has to do with your period. That’s obviously super limiting, but I’m sure you’ll think of something. As for Bella Thorne, it’s never too late to change a puppy’s name, is it?