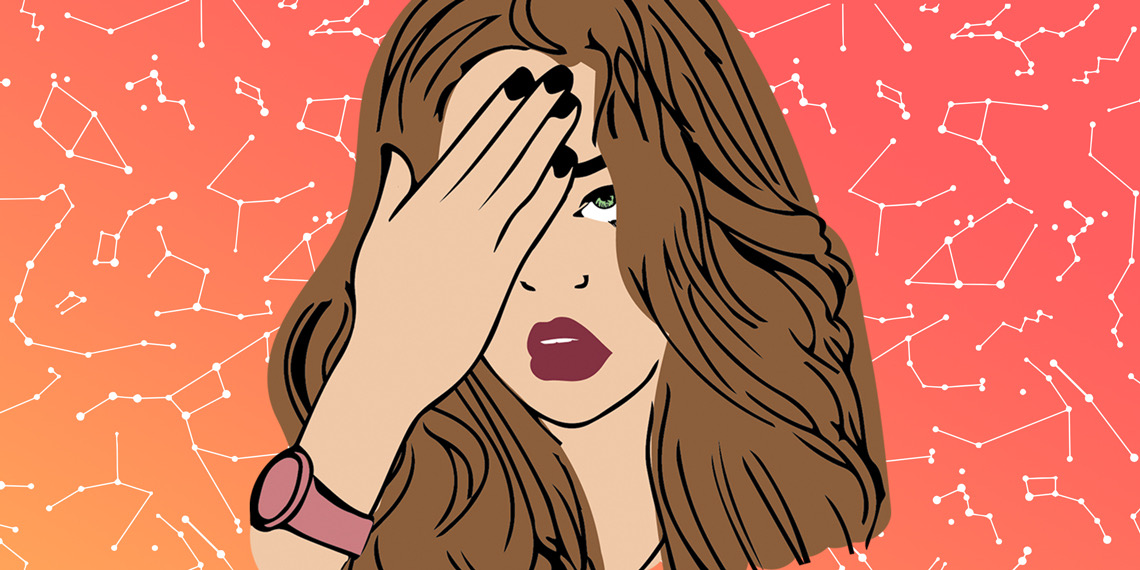 Mercury Is In Retrograde Again: Here’s Your Weekly Horoscope March 19 – 23

I hope you got your fill of green beer and basketball over the weekend. We’re back to the grind, and the planets are sick of your shit. Suck all the good out of your horoscope March 19 – 22, because we have some tragic news: Mercury is in retrograde from March 22 to April 15. Also, Jupiter is in retrograde at the same time. That retrograde lasts longer, but it’s not such a vengeful asshole as Mercury. So there’s that. Also, it’s Aries season; get ready to be bossed around.

Your time has arrived. Ok, honestly, when is it not your time though? The Sun enters your sign this week so you’re #blessed all month long. Your horoscope March 19 – 23 is living the teenage dream, even with the retrogrades. Retrograde Mercury and Venus are in Aries this month too, so that’s sort of OK news. Even though Mercury in retrograde might bring exes and old friends into your life, it won’t be quite as brutal on you as it is on others. Consider that your birthday gift.

Mercury in retrograde takes place in a hidden part of your chart that urges you to take a journey into your past. You may be inspired to visit your old stomping grounds or text an ex. Uh, let’s be clear. No one likes a hanger-on. Set an iPhone reminder for your horoscope March 19: don’t text anyone you shouldn’t. Tell Mercury to fuck off by only looking ahead to bigger and better things this month.

This week, it might feel like all your mistakes and flaws are on display for everyone to see, and it’s not just because you can’t figure out how to conceal a monster breakout. Even though you’re getting a lot of positive attention, your insecurities won’t go away. For a Gemini horoscope March 19 is the day to try and follow as many affirming Insta accounts as possible. Try to remember that everyone is basically so self-centered they’re not worrying about what’s going on with you.

For the next four weeks, the Sun sits at the top of your chart. It’s time to fucking shine, Cancer. If people ask why you’re glowing (we know what you mean), tell them your horoscope March 19 has made you a ~star~. You might not feel prepared or qualified to take on opportunities that come your way during this time. Those thoughts are really stupid, though, and you can blame them on Mercury. You’ve got this. Really.

While everyone else is figuring out how to live their normal lives while Mercury is in retrograde, you’re trying to GTFO. If there’s not a trip on the horizon for you in the next month, there should be. A change in scenery is basically the key to maintaining your sanity in the month ahead. If you can’t actually go somewhere tropical, break out the self-tanner, drink a bunch of rum, and skip work for a few days. You’ll have that glow everyone will be jealous of either way. Losers.

It might be weird, but Mercury being in retrograde doesn’t really fuck with you too badly this time around. It actually just inspires you to tie up loose ends. This week, it’s time to pick up that last box of stuff from your ex’s place. Maybe you have a bunch of half-done Pinterest projects lying around. Either finish them up or throw them out. You need a clean slate physically and mentally for shit that’s coming up in the future.

The Sun moves opposite your sign this week. Like, thanks a lot, Aries. The Sun draws your attention to partners and friends, while Mercury in retrograde draws your attention to ex partners and friends. WTF? Yeah, you can already tell that’s going to lead to some arguments between you and those you’re closest to. Lest you think your horoscope March 19 is a petty bitch, Venus, will thankfully make your dealings with others sweet. Let’s just hope that it’s not too sweet, especially with the exes. Gross.

The next four weeks are pretty ideal for you. You’ll be hard-working and efficient in the tasks you have to accomplish. It’s time to actually get your ass back to the gym. It’s time to actually do (or have your dad do) your taxes. So how does Mercury fuck with you this time? Well, you pretty much get out relatively unscathed. Sure, you might bump into someone in the elevator or burn your hand on your straightener. But if that’s the worst of it, you’re pretty damn lucky.

While the stars align to give you a good time over the next month, Mars is in your possessive second house for the next few weeks. You’ll be pretty dead-set on getting what you want and having it your way. Your friends might call you out for being selfish, but it’s not your fault that your sign is blessing you with good times and fun while their signs are all caught up in Mercury being in retrograde.

Let’s be real, even though you are usually pretty confident, you can often fall into the trap of negative self-talk. Sure, we all have issues, but your goal should be not to fuel them this week. Your horoscope March 19 can seem like a real Debbie Downer, but just be cautious. If your friends or coworkers have shitty, negative attitudes, just avoid them. Their bad vibes could easily rub off on you, and that’s the last thing you need when Mercury is retrograding for the next month.

Be careful where you’re giving your time and attention this week. Spending your days worrying or staring at your phone waiting for a text back or a call on a job you’ve been wanting isn’t going to make anything happen. So relax a little this week. Meet your friends for happy hour. Throw back that second glass of wine. Put it on your parents’ card and tell them your horoscope March 19 says you should! What’s that dumb quote about life happening while you’re busy making other plans? Yeah, meditate on that.

You’re super sensitive by nature. You’re a Pisces, duh. So it doesn’t take a lot to send you into a downward spiral. With Mercury in retrograde, you could find yourself crying at your desk over the dumbest shit. This is the time to rediscover waterproof mascara or buck the fuck up about how things make you feel. Adopt some of the take charge, bossy attitude from your neighbor Aries in order to live your best life, even in retrograde.