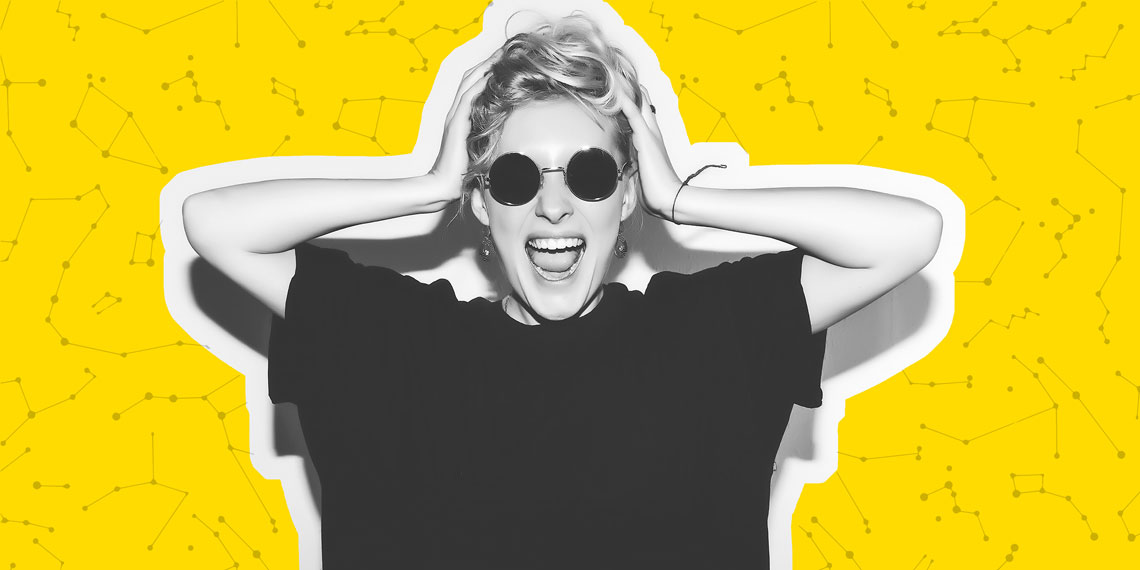 RIP To Your Plans: Weekend Horoscopes For July 27-29

It’s the first weekend of this cycle of Mercury in retrograde, so be prepared for major SNAFUs even for the best laid plans. Mercury causes traffic jams at the beach, delayed flights, and may or may not be partially responsible for you drunk texting your ex. Whatever you planned to do probably won’t happen, so pack a roadie in case you get stuck somewhere on the way to the party. Here are your weekend horoscopes for July 27-29.

This is a weekend for calling it quits. Well, maybe deciding to call it quits. Wait to part ways with a lazy lover or an annoying friend until Monday so it doesn’t ruin your whole weekend. Then again, if you cut ties by Friday afternoon you can have a lot more fun all weekend long without worrying about how you’re going to do it. IDK, just weigh your options and then drop the dead weight.

Normally, you don’t draw attention to yourself, but you could find yourself in hot water if you let that Taurus temper flare up in public. Instead of yelling at your boyfriend in public for getting too drunk at the pregame, wait until you get home to passive-aggressively sulk until he figures out what he did wrong on his own. He might never figure it out, but at least you didn’t embarrass yourself in front of your friends.

Friday’s full moon in combination with Mercury in retrograde can really make you vulnerable to mishaps. Clumsiness might be your curse. Sure, you look smoking hot in an all-white outfit, but maybe stick to drinking clear liquors and not whatever jungle-juice-sex-on-the-beach-fruit-punch concoction is on special. It’s inevitable that even if you aren’t a sloppy mess, someone else will be, and it will be spill city. Just lookin out, hun.

You’re likely to get in a tiff about one of those two topics banned from polite conversation: sex and money. Hopefully, you aren’t somehow fighting about both at the same time, amirite? Anyway, if you’re in an argument, avoid letting a third party get involved. You don’t need Kat or Jess or even your mom stepping in to help fight your battles. You’re a big girl; resolve sh*t on your this weekend.

With Mercury in retrograde this weekend, you might feel like you’re literally losing your GD mind at every turn. You’ll be that friend asking for a hair tie, asking for a phone charger, asking to use someone else’s sunscreen because you literally just can’t get your sh*t together. Luckily, the Sun is in your sign, so everyone has basically be nice to you. Keep things simple and make sure you pack both pieces of your bikini if you’re hitting the water.

With Mercury in retrograde, you’re prone to reminisce a little too hard this weekend. There’s a lot going on with you and the weekend is busy, too. You might think back to a time when all you had to do was smoke weed and eat pizza on Chad’s futon. Resist the urge to text whomever Chad is to you. The guy that you find comforting because he doesn’t challenge you whatsoever isn’t in your life for a reason, and that reason is he’s an unemployed stoner whom you can’t introduce to your friends.

Friday’s lunar eclipse in Aquarius means you can’t play nicely with others. As a balanced Libra, you aren’t the biggest attention whore of the signs, so it’s important that others pay attention to you this weekend since you rarely ask to be the focus. When someone bucks your authority in the group text about suggesting a brunch place, all hell could break loose. Tantrum City, population: you.

The lunar eclipse could have you feeling betrayed this weekend. Your friend could post a snap to her story where a girl you don’t really like appears in the background. Like, why would they even be hanging out together?? Your boyfriend could drop info about his past that isn’t, like, bad, but you just didn’t know. You’ll feel like he’s been hiding stuff from you and, yes, it will be a fight.

It’s time to keep yourself from mouthing off this weekend. Instead of firing back in public, and by public I mean on Twitter, type what you were going to say to a friend, screenshot it and have a good laugh between pals. With Mercury in retrograde, it’s easy for your words to get misconstrued. It’s easier to explain what you meant to one friend than to battle trolls all weekend. #notworthit

You may think your bank account can handle your habits this weekend, but you could be wrong. Check yourself before going out. Like, how embarassing would it be to have your card denied at the bar because you went too HAM buying novelty pool floaties on sale earlier in the day? Pretty damn embarrassing. I mean, I hope you got enough likes on the Insta of you on that giant pizza float to make it worth it.

Weird things happen when Mercury is in retrograde, so don’t be surprised if you’re sick of your own sh*t this weekend. You might be frustrated and angry with yourself for not being able to get it together, be a better friend/girlfriend, eat healthy all the time, exercise regularly, etc. etc. etc. Well, tell those bad thoughts to f*ck right off. Having it all together is for mommy bloggers on Instagram. You just do you, and put off trying to be perfect forever or at least until fall.

The lunar eclipse in your subconscious realm means any garbage feelings you’re having will mostly be chilling under the surface, waiting to bubble up and make you look insane. Save yourself some embarrassment and tell your friends you’re just hormonal or something when you cry uncontrollably in a screening of Mama Mia: Here We Go Again. That way you don’t have to explain that your mom used to clean the house to ABBA when you were growing up and you wish you were nicer to her when you were in high school. Not speaking from experience here or anything, of course.