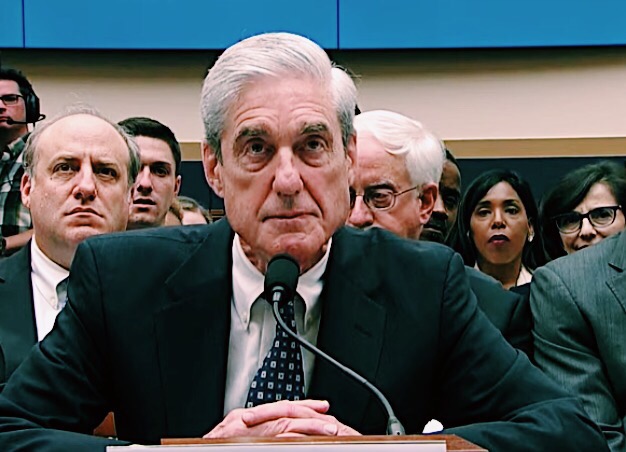 We’ve said it before, we may never say it again: It’s Mueller Time.

Today, former special counsel Robert Mueller was dragged off his couch to testify before members of Congress, despite his repeated public claims that he had nothing to say. Honestly, we get it.

Mueller was subpoenaed and, unlike a number of Trump associates who have ignored legal requirements to appear, the 74-year-old showed up at 8:30 a.m. for two separate hearings. The first, before the House Judiciary Committee, focused on the Mueller Report’s findings on obstruction of justice, and how Trump’s associates, and potentially (probably) (definitely) the president himself, attempted to influence Mueller’s investigation. The second, before the House Intelligence Committee, concerned Russian meddling, and how much Trump and his campaign knew about and encouraged attempts to influence the presidential race.

Democrats spent most of their time asking Mueller yes or no questions that would lead him to restate the more damning details of the 448-page report. Republicans spent their time screaming at an old man and calling Mueller and the investigation “un-American,” “disruptive to the American people” and a “perpetuation of injustice” intent on destroying the president. (Bob Mueller is a lifetime public servant and veteran who has a Bronze Star, a Purple Heart, and a Navy Commendation Medal and served as FBI director in the aftermath of 9/11.) He’s also a Republican.

Mueller answered probably 70 percent of questions with fancy lawyer ways to say “no comment,” such as “that’s classified,” “that’s outside my purview,” “I cannot adopt that characterization,” “it’s in the report” and “I won’t speak to that.”

And though the hearings largely confirmed information that very invested watchers have long known, there were a few moments when Mueller appeared to affirm that Trump’s behavior could meet the standard for obstructing justice — always reiterating that he was barred from making that call. As a reminder, Mueller has said his team followed  guidance from the Office of Legal Counsel (OLC) that states a sitting president cannot be indicted. For that reason, Mueller has said that he didn’t necessarily decide that Trump didn’t obstruct justice, but that he decided not to decide.

Here are some of the biggest moments from both hearings:

Mueller confirmed that his report did not “totally exonerate” the president

You know how the women’s national team scored in the first 12 minutes of nearly every World Cup match? This was kind of like that, but if the game ended in a tie and your opponents just fouled you the whole time.

Nevertheless, just minutes into the hearing, House Judiciary Committee chairman Jerry Nadler (D-NY) got Mueller to vocalize one of the most distorted elements of his investigation: whether or not he exonerated the president of obstructing justice. Here is their exchange:

Nadler: So your report did not conclude that he did not commit obstruction of justice, is that correct?

Mueller: That is correct

What about total exoneration? Can you totally exonerate the president?

… But he clarified repeatedly that he didn’t decide not to prosecute, he decided… not to decide

“Decided not to decide” is the “we were on a break” of the Mueller investigation and its aftermath —  repeated often and honestly kind of annoying after a while. But for a moment — we thought we’d get a different answer when Democratic Rep. Ted Lieu of California explicitly asked Mueller if he would have indicted the president if it weren’t for the Office of Legal Counsel guidelines against indicting a sitting president:

“I’d like to ask you the reason, again, that you did not indict Donald Trump is because of OLC opinion stating that you cannot indict a sitting president, correct?” Lieu asked. “That is correct,” Mueller replied.

This felt like an explosive moment — that Mueller had escalated his go-to statement of “we decided not to decide” to “we decided but couldn’t pursue it.” But Mueller quickly qualified his answers.

“The only thing I want to add is I’m going through the elements with you. That does not mean I subscribe to what you’re trying to prove through those elements,” he said.

After taking a short break, Mueller took a moment before his second hearing to further clarify the earlier statement, reiterating that the OLC guidelines influenced their decision — you guessed it — not to decide whether to prosecute or not, and that it would not be correct to say he would have prosecuted if it weren’t for those guidelines.

One time I saw my colleague’s boyfriend hooking up with a co-ed at my younger cousin’s birthday, but only mentioned that I saw him at a college party, which was incriminating enough that if homegirl couldn’t read between the lines, she didn’t want to know. This felt kind of like that. The Mueller Report details 10 instances in which Trump potentially obstructed justice. One involves instructing his White House counsel Don McGahn to fire Robert Mueller. (He refused — later saying Trump had asked him to do some “crazy sh*t.”) But later, Trump reportedly asked McGahn to create a false record stating that Trump had never asked him to fire Mueller.  McGahn again refused. Democratic Rep. Cedric Richmond asked Mueller if he believed Trump wanted to falsify records to cover up the fact that he attempted to hamper the investigation. Also known as obstructing justice.

“I believe that to be true,” Mueller said.

“So it’s accurate to say the president knew that he was asking to deny facts that McGahn ‘had repeatedly said were accurate.’ Isn’t that right?” Richmond followed up.

Trump could be charged with a crime after he leaves office

A Republican accidentally got Mueller to say Trump could totally be charged after he leaves the office. I believe in soccer we call this an “own goal.”

In the first hearing, GOP Rep. Ken Buck of Colorado pursued a line of questioning intended to defend Trump, but it totally backfired:

GOP Rep. Ken Buck: “Could you charge the President with a crime after he left office?”

Buck: “You believe that…you could charge the President of the United States with obstruction of justice after he left office?”

To be fair, Mueller wasn’t saying, “Trump specifically should be charged” when he leaves office,  just that it becomes an option when he does. But in eliciting this response, Buck accidentally got Mueller to confirm that these woes won’t leave Trump once he leaves the office.

There were very few moments when Mueller said anything he hasn’t already written in the report. That was until Democratic Rep. Val Demings of Florida got to him. Mueller asked Trump for an in-person interview throughout the investigation, which the president repeatedly refused. Mueller reiterated today that he did not subpoena the president because he knew Trump would put up a legal fight and it wasn’t worth prolonging the investigation another year to force him to show.

Instead, Trump provided written answers to a series of questions. Demings asked Mueller if it was “fair to say that the president’s written answers … showed that he wasn’t always being truthful,”

Mueller said that was “generally” fair to say, but declined to say whether he felt the president was “credible” in his answers. Yes, this exchange felt like a Bachelorette contestant trying to deny he has a girlfriend without saying “I don’t have a girlfriend.”

Mueller denied Republican claims that his prosecution team was pro-Clinton

Nobody misses Hillary Clinton more than the GOP. In his questioning, Republican Rep. Kelly Armstrong implied members of Robert Mueller’s team had conflicts of interest because they appeared to favor Hillary Clinton politically, demonstrated either through donations to her campaign or prior affiliations with her and her associates. (She and Bill have been in Washington for 100 years. Show me who hasn’t.) Mueller defended his team, noting their political affiliation is not relevant to their ability to investigate issues of national importance.

In “25 years I have not had occasion, once, to ask somebody about their political affiliation. It is not done,” the former special counsel said. “What I care about is the capability of the individual to do the job and do the job quickly and seriously and with integrity.”

Who among us hasn’t complained endlessly about a colleague while recoiling at the thought of them being fired? In May, Mueller made a public statement stating he could not make a determination about whether to prosecute the president, there are other ways our government can pursue deeper investigation. Many on the left saw this as an explicit nudge to begin impeachment proceedings, as only Congress can. But today, Mueller largely demurred from that question.

Sure, we all love when an early-season favorite makes a return in the show’s later years (with a notable exception to Aidan the SATC movie.) But looks like in this case, it was never gonna happen. One of Trump and his supporters’ main beef with Mueller is that he is “compromised” and biased against the president, partly because, as they claim, Mueller wanted to be FBI director (again) but Trump didn’t offer him the job. Reminder: Mueller was already FBI director, for 11 years. Today, Mueller confirmed he had no interest in the job. He simply advised the president about what it entails.

The Russians interfered in our elections in a “sweeping and systematic fashion,” a fact the president still denies

Nothing unites a room of awkward acquaintances like a shared enemy. Mueller affirmed Russia’s malice in opening statements to both committees and became most animated when lawmakers asked him about the dangers of the election interference.  Asked by the intelligence committee if the investigation into Russian meddling was a “witch hunt,” as the president has characterized it, Mueller said “I like to think no. No.” He confirmed several times that Russian meddling was designed to benefit the Trump’s bid for the presidency and that his campaign was aware of this fact, and that characterizing the idea of Russian meddling as a “hoax” is absolutely incorrect.

These moments brought us Mueller’s most full-throated critique of the president. Trump is on record praising WikiLeaks and encouraging the Russians to hack and release Hillary Clinton’s emails. Yeah, remember that time a candidate for president — and the eventual president — urged a foreign power to interfere in our elections? You bet your butt that came up in the second hearing on Russian meddling.

“Boy I love reading those Wikileaks.”

When Quigley asked Mueller if he found those statements disturbing, Mueller replied: “Problematic would be an understatement,” and that Trump gave a “boost” to “what should be legal activity” — actions that “certainly calls for an investigation.”

Committee chairman Rep. Adam Schiff pummeled Mueller with yes or no questions related to the Trump campaign’s coziness with Russians throughout the election. Schiff got Mueller to confirm that: Russians had multiple contacts with multiple members of the Trump campaign, that members of the campaign attempted to benefit financially, that Paul Manafort was hoping a Russian oligarch would forgive his debt, and Trump hoped to make money from a Trump Moscow tower. And, perhaps most damningly, that the campaign lied to cover it all up.

Basically I feel like there was a lot in the #muellerhearing today that will matter in the history books but maybe won't change the cable news narrative in the short term.

I'm okay with that…

While some Democrats are already renewing calls for impeachment following the hearing, Trump and his supporters are also celebrating. The hearing today offered no bombshells but confirmed and elucidated the president’s support of election interference and likely attempts to block an investigation into his associates inappropriate and in some cases criminal, affiliations with foreign agents — all things we already knew.