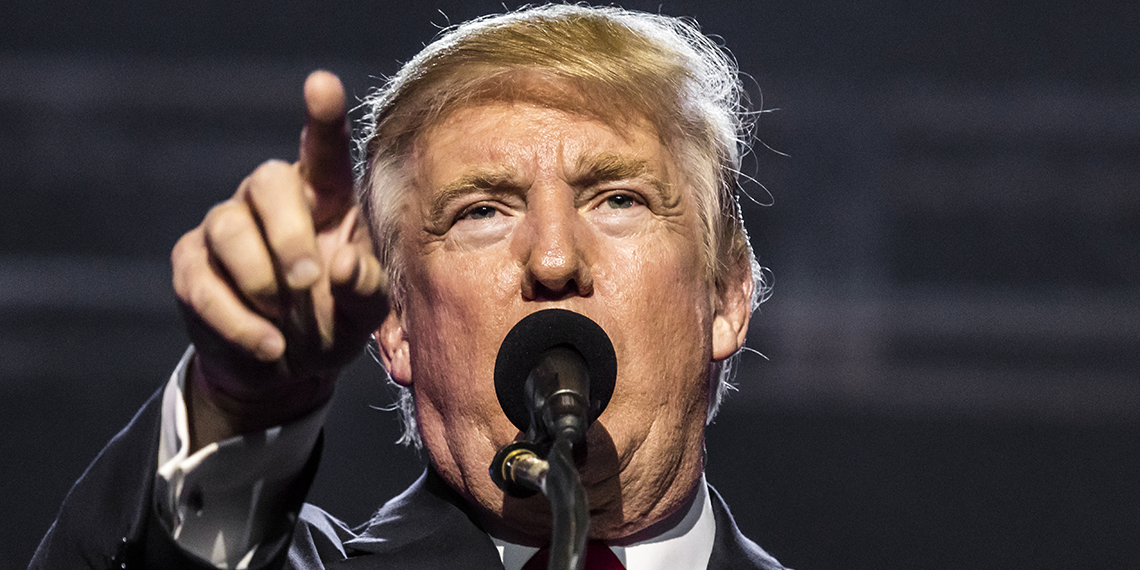 We Have To Talk About Trump’s Antisemitism

My Jewish identity has been a huge part of my life since I was born. I was lucky enough to grow up somewhere with a large Jewish community. I went to a Jewish summer camp, participated in youth groups, and now go to a college with a relatively large Jewish population. So, while I grew up aware of antisemitism, I’m privileged in that my own experiences of it have been pretty limited.

Unfortunately, this is not super common for American Jews. As the Anti-Defamation Leauge (ADL) reported, antisemitic attacks are only becoming more frequent across the United States. In 2019, a recorded 2,107 anti-semitic incidents took place across the country. This was a 12 percent rise from the year before and the highest number since the ADL began recording.

Antisemitism is widespread across both major parties in the United States. Sometimes, it seems like attacks on Jewish people are coming from all sides. While we would expect a normal president to denounce all types of hate, including antisemitism, this isn’t the case with Trump. Instead, he covers up his antisemitic policies and behaviors with pro-Israel policy.

For his entire presidency, Donald Trump has leaned on being “good for American Jews” because he is “good for Israel.” This week alone, during an annual pre-Rosh Hashanah (the Jewish New Year) call with Jewish leaders, Trump said, “We really appreciate you… we love your country also.”

This isn’t the first time he has said something like this. Over the last several years, Trump has repeatedly implied that Jewish Americans should be grateful for his actions in the Middle East and his strengthened ties with the current Israeli Prime Minister. And, peace is a great thing, no matter who the President is, part of their job is helping further peace plans whenever possible. My problem isn’t with that, and honestly, I’m not even here to write about conflicts in the Middle East.

My problem is that when Trump views Jewish Americans’ electoral support as tied to Israel, he is perpetuating the idea of ‘dual loyalty.’ The concept of dual loyalty is an antisemitic dog whistle that implies that Jewish people are inherently disloyal and place the global Jewish community over the countries in which they live. In the United States, it is used to imply that American Jews can’t be 100% loyal to America because some of their loyalty is owed to Israel or the international Jewish community.

Trump’s attempts to win Jewish people’s electoral support are all based on the extremely reductive assumption that American Jews’ top policy concern is Israel. While it may be the case for some members of the Jewish community, it certainly isn’t true for everyone. By only attempting to appeal to Jewish voters through Middle Eastern policy, the Trump administration actively ignores dangerous forms of antisemitism in America.

White supremacy and antisemitism are inextricable from each other. We all remember what Donald Trump said after the Unite The Right rally in 2017: “you also had people that were very fine people, on both sides.” Many of the “very fine people” that Trump was talking about were carrying Nazi flags and shouting, “Jews will not replace us.”

Throughout his presidency, Trump has clung to white supremacists’ support, endorsed their actions, and continuously given them platforms. The most recent example of this is Trump’s embracing of the QAnon conspiracy theory, which has blatantly anti-semitic roots. The theory pushes the narrative that the Rothschild family holds control of every bank in America and alleges that a secret ‘elite’ class dominates other important industries such as the media.

A few weeks ago, when asked about the conspiracy group, Trump said, “I don’t know much about the movement other than I understand they like me very much, which I appreciate.” This is just another case of Trump not only dismissing dangerous antisemitism, but giving it a platform.

American Jews are not a monolithic group, and we care about a lot of things. Like I said, the top priority for some Jewish people may be the state of Israel, and that’s ok. However, it is neither mine nor many of the Jewish voters I talk to. In fact, around 75% of Jewish voters supported Hillary Clinton in the last election, and Jewish voters consistently make up a large Democratic party base.

This baffles Trump, who, despite his claims of being a great ally to the Jewish community, said that he thinks that if “any Jewish people that vote for a Democrat — it shows either a total lack of knowledge or great disloyalty.”

If the President actually cared about Jewish voters, he would stop perpetuating the incredibly dangerous narrative of dual loyalty and denounce white supremacy. But, I’m not really holding my breath.