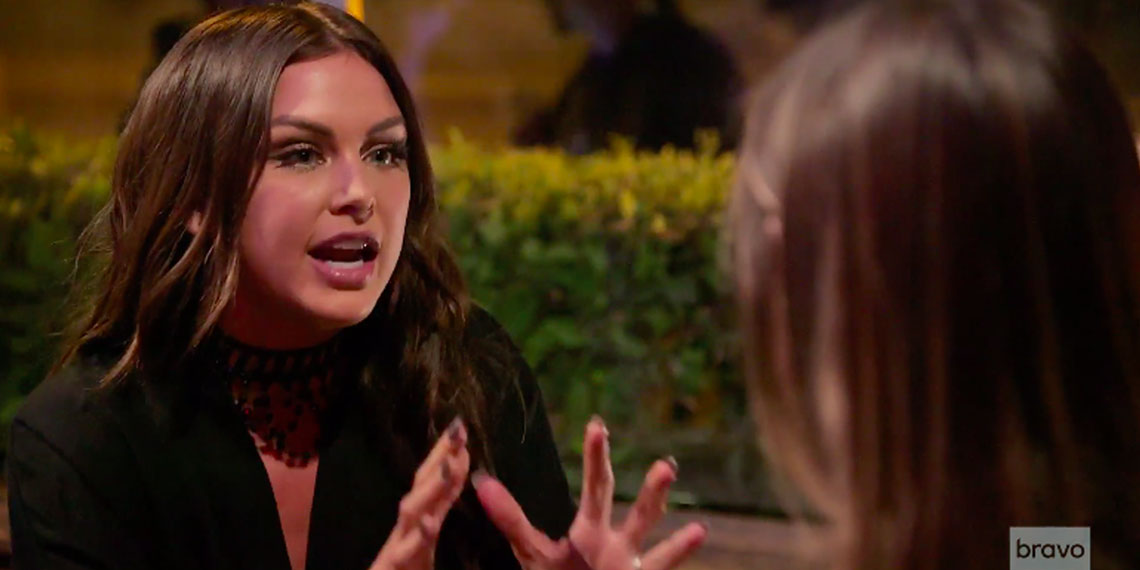 ‘Vanderpump Rules’ Recap: It’s Feminism 101, And You All Failed

So I guess Bravo really is sticking to this Sunday 9pm Vanderpump Rules time slot, huh? That’s gonna make it difficult for me because Sunday at 9pm is typically when I pass out due to my raging hangover. But fine. I guess we all have to make sacrifices for our art.

Last week on VPR, Raquel got ambushed at girls’ night and everybody hates James. Did I miss anything? I don’t think so. This episode better be good, or I swear I’ll… still be back every week like the faithful lackey I am. Oh and also Katie gave Lisa an ultimatum.

We open on Katie’s meeting with Lisa.

Lisa’s response is, “you’re just gonna have to trust me to deal with it, ok?” in other words, “I’m not gonna do sh*t but I know you’re not either because you depend on this fake serving job for Instagram likes.”

I love that Nathalie’s response to James body-shaming Katie is “c’est la vie.” Lol that’s the most French thing in the world. It could only have been more French if she’d said it while taking a drag of a cigarette and she was colored in black and white for some reason.

Meanwhile, Scheana, Billie, and Ariana are hanging out, and GUESS WHAT? They’re talking about Billie’s transition! As per usual! So glad we’ve progressed this season. Apparently they’re taking all of Billie’s fat and injecting it into her ass. Wait, can I get that?

Now Scheana is inserting herself into Katie and James’ fight by coming for James. Ariana is right in that this is classic Scheana, however, Ariana claiming Scheana could be friends with James and still be friends with Stassi et. al. is patently false. You’d think Ariana of all people, who hated Stassi until 5 minutes ago, would know that.

Jax and Brittany are making beer cheese. Bless Brittany’s heart, she thinks loving cheese is a personality trait. And she can’t pronounce Gouda. Yeah, no. You can’t claim to love cheese then. Have you never seen She’s The Man??

Jax: I think Raquel is the best person for James to date. There’s no other person who’d put up with that sh*t.
Also Jax: I knew she was dumb but there’s only a couple of marbles rolling around in there.

ARE YOU F*CKING SERIOUS?? Somebody get this asshole a mirror. The lack of self-awareness is astounding. Like, does Jax honestly think he is better than James or does he just not see the connection at all?? At least James’ cheating hasn’t been proven. Yet.

Jax Googling “how to sell food”: Ugh this is hard, hun.

Brittany, cut the dead weight loose! He is going to drag you down.

Lisa and the Toms go to Tom Tom, and I’m honestly annoyed that they are still pushing this. WE DO NOT CARE ABOUT TOM TOM! Or at least I don’t. Unless you’re going to give us a spin-off, miss me with this entire subplot.

Sandoval: What can we do to help?
Lisa: *gives them a list of easy tasks*
Toms:

Toms, internally: Oh, you actually want us to help help??

Does anybody care about Scheana’s old apartment? No. The only thing I care about is her leaving her marital wine glasses behind. Nobody wants that sh*t, Scheana!

However I’ve got to respect Scheana making James help her move, only to basically dump him as a friend right after. Worst trade deal in history, possibly ever!

You did it, James! You cured Scheana’s anxiety!

Yeah, like, harsh. Sorry but I’m #TeamJames. He’s literally spot-on in guessing exactly what went into this interaction, including the part about him helping her move. I think the problem with Scheana is that she does too much, because I bet now she’s going to go running to Stassi to tell her that she told James off, and I BET YOU ALL THE CONTENTS OF MY RETIREMENT ACCOUNT that Stassi is going to be like, “Why would you do that? We never told you that you had to do that.”

Am I right or am I right? I did watch season 5 of this show, after all.

I’m also offended that Brittany calls her grandma “ma-maw” but spells it “Meemaw.” Like, what?? That is so clearly mee-maw. I have friends who actually call their grandmothers mee-maw and I feel like they would have some words about this. I know Brittany is from Kentucky, but that combination of letters is not supposed to make those sounds!

Naturally the conversation turns to James. Schwartzy in typical Schwartzy fashion is like “he said he was sorry Bubba!!!!” *puppy dog eyes*

Schwartz: Not to make light of the situation but my wife sure does love an ultimatum.

You got it, Schwartzy! She’s your wife!! 10 points to Schwartzy!!

So Stassi and Ariana are still friends and they’re hanging out. This fake video game sequence was cool and all, I guess, but it was no 1980s sitcom. Somebody give these Vanderpump Rules editors a job because they’re clearly bored out of their minds.

Ariana: Our theme is the best because no one ever does winter in the summer
Me:

Yeah yeah yeah it’s all fun and games for you because you don’t have a winter, but it’s not so glamorous when you’re trudging through 6 inches of brown slush and it gets dark at 4pm. *Takes drag of cigarette* Summer? I haven’t heard that name in a long time.

Ariana: I used to look at Stassi and see this entitled brat, and now maybe she’s not so bad.

Ah, the power of women supporting other women!

James is having dinner with his entire family, including his divorced parents.

Or as the rest of us call it, “in the middle of the work week”.

WHAT? James gave his brother a check for five grand? But does that check actually clear, though? Lmk.

James is back at See You Next Tuesday, so I can tell Lisa took Katie’s ultimatum very seriously.

Lala shows up for unknown reasons. Is she still pretending to work here?

Lala: Rand produced a film called Gotti with John Travolta and Kelly Preston so we were at that premiere which was amazing.

Oh yeah, we all heard of it. And how much it bombed. We heard how it literally got a 0% on Rotten Tomatoes and the NY Times called it “a dismal mess”. But sure, act like you just got back from Rand’s Oscar acceptance!

Lala: I think because it was a mob movie, Hollywood gets confused when it gets glorified.

LOLLLL Lala doesn’t know the same Hollywood we all know, I guess. As Lisa said: Scarface, The Godfather, Goodfellas… shall I go on?

Guillermo and Lisa are talking about See You Next Tuesday, and Guillermo is like “well James brings in the bacon.” I guess I should just state the obvious and ask why Lisa doesn’t just forbid all the bartenders from serving James?? I feel like that would solve 99% of the issues.

Lala pulls Raquel aside (aren’t you guys supposed to be at work??) to be like “I’m not a hypocritical feminist because I can’t support women who don’t support themselves.” I mean, why not just keep it real and say you don’t like Raquel because she’s dating James, whom you hate?

Lala: I do nothing but support other women
Also Lala: Girl you’re dumb! *clap* wake *clap* up!

Solid rebuttal, Lala. I kind of love Raquel also using the same feminist buzzwords: “You should be building women up instead of tearing women down!”

Yeah I believe that as much as I believe James didn’t cheat. Also tell me how much you support other women when you just called Raquel a twat for calling you out.

This season literally feels like the producers gave the girls three feminist vocab flash cards and rewarded them with free shots for every one they dropped in conversation.

Later, Raquel and James are rehashing this conversation and Raquel asks James if he thinks she’s dumb.

Raquel: I really went through some sh*t. I couldn’t complete my multiplication tables so I had to watch Winnie the Pooh instead of getting my ice cream scoops.

Damn we gotta get Margot Robbie to star in the movie version of this horrible tragedy.

Lisa, Schwartz, and Sandoval are holding interviews for Tom Tom, and I’m both surprised and impressed the the Toms actually showed up.

Remind me again WHY Lisa gave this man a position of authority? You could legit steal from the register in front of his eyes and he’d be like, “Dude. Dude. That’s not cool man.”

Sandoval: I’ve been in the food industry for 25 years.

Dude, I just looked it up, you’re 35. Going to McDonald’s with your mom at age 10 does not count as experience being in the food industry.

TBH Sandoval would have done a better job than the clowns we call our Senate. Heyooo!!

The son of TEDDI MELLENCAMP comes in, are you f*ckers happy? He immediately gets the job as a barback, surprising no one.

James rolls up to talk to Lisa. Lol of course Sandoval doesn’t want James to get fired “just because Katie issued an ultimatum.” God forbid a woman try to stick up for herself, right Sandoval?

James: I’ll be sober for the rest of my life if you give me one more chance.

Holy sh*t, Lisa does, in fact, fire him. I’m pretty surprised, but I will bet the remainder of my retirement account that James will get his job back in like, two weeks. Or at the very least, before the end of the season. Then again, a quick browse of James’ Instagram and the SUR Instagram doesn’t indicate that See You Next Tuesday is still going on. But then again, maybe these people are just a little smarter about social media spoilers than the people who go on The Bachelor. That’s not a high bar for those of you who don’t watch The Bachelor. The verdict: I truly don’t know what will happen. Thank you for attending my TED Talk.

I’m honestly pretty sad about James getting fired. But what can I say, I’m an empathetic crier. So we were right over the summer to think that James got fired and that’s why they decided to try “Girls’ Night” on Tuesdays instead of See You Next Tuesday. I guess this means we’ll be getting less James drama and more Billie Lee drama? We’ll have to see.

Also, I’m going on vacation for a couple of weeks, so I won’t be writing these recaps. But don’t worry! I’ve entrusted some very funny people to take over in my absence, and I’ll be back before you can say “women supporting other women”!