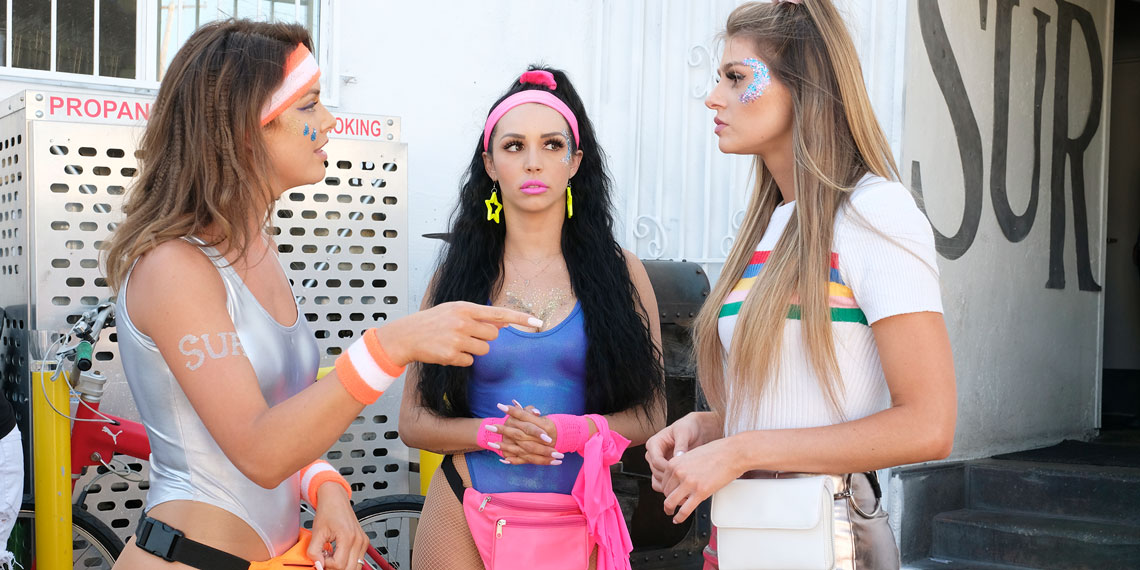 ‘Vanderpump Rules’ Recap: So What Is The Truth?

What’s good, Sexy Unique People? It’s your favorite recapper, Sgt. Olivia Betchson, here. I’m here one whole day early to recap Vanderpump Rules season 7 episode 3, which got moved to a new day for some reason. Smh, you think you can depend on something, like you have been doing for the past FOUR YEARS, and then they go changing it for no discernible reason. Is it so much to ask for my show to be on at a consistent time? Is it?? There’s so little I can rely on anymore in this world.

This week picks right back up at Pride, after James has called Katie fat. He yells at Katie to “lose some f*cking weight” before storming off and telling some guy that Katie can go f*ck herself. Way harsh, Tai.

Scheana is talking about how she doesn’t know if Hope hooked up with James. Which is fair because the only people who know that for sure are Hope, James, and God. And still Scheana gets sh*t for this very uncontroversial opinion. It may be besides the point that James cheats on Raquel a lot, but also, why is this anyone’s business? Scheana is the only one who actually likes and wants to be friends with Raquel, so she’s realistically the only one who is in a place to tell Raquel about any cheating rumors. Everybody else isn’t doing this out of loyalty to Raquel but a desire to f*ck up James’s life. You heard it here first!

Lisa arrives at Pride dressed like she’s going to the Kentucky Derby.

No further comments at this time.

Raquel comes back up to Kristen and Hope and steals Hope away for a second. Raquel asks her to tell her what really happened at Coachella. Hope claims that Coachella is only the tip of the iceberg and she and James were sleeping together for THREE YEARS!! Oh and I’m sorry, this Coachella incident was not at this past year’s Coachella, but it actually happened two years ago.

I’m sorry, hold the phone. So you mean to tell me that this alleged incident happened years ago, and we’re only just hearing about it now? Hope sat on this information for TWO YEARS?? And she’s bringing it up now as if it’s somehow relevant and current information? Seems extremely suspect. How can you even begin to verify something that happened years ago?? Also, is Raquel really meant to blow up her relationship over something that may or may not have happened two years ago? I’ve gotta say, this is not Kristen’s best work. Try coming through with receipts from this calendar year, hmm?

Stassi calling James an emaciated muppet literally made me spit out my drink. Speaking of said emaciated muppet, James is literally full-on in white Kanye mode. He’s f*cked up, slurring, wandering around and trying to order a pumptini. It’s not good.

Lisa pulls Raquel aside to basically be like “come get ya mans and make sure he doesn’t have another sip of alcohol.” Yeah, that will end well. When has anyone in the history of alcohol successfully stopped a drunk person from doing something stupid? Never. So Raquel confronts James again about the rumors, and all he does is call Hope a f*cking whore. Hmm, so she’s a whore for not sleeping with you? Reminds me of middle school when some girl called me a slut when I hadn’t even kissed a guy yet. Just fun misogyny things!

We leave this with Raquel saying she wants to stay with James .

Raquel and James are trying to put together furniture while discussing the train wreck that was the day before.

Ok so James’s story is that he and Hope hooked up two and a half years ago, before he was with Raquel.

Right after this, Peter calls James to un-invite him to his birthday. I kind of wonder what Kristen had to blackmail him with in order to get that to happen.

James: Well Tom’s drinks don’t taste like alcohol so it snuck up on me.
Raquel: Mmm, no that’s not it.

Yeah no, that’s not what happened here. This is wild because I’ve never even heard Raquel speak this many words before, and I legit have met her in person. I’m into this, though. She says she doesn’t want James to have another sip of alcohol ever again. I’m not going to hold my breath waiting for that to come true, because I don’t wish to asphyxiate. Still, I can respect that she has a more realistic perspective of addiction than Scheana.

Some lady with a pageboy cap shows up to SUR to ask Lisa if she could give her brother a job. OK so it looks like we’re getting another Instagram model added to the cast… who’s probably going to date Scheana. Let’s just hope this guy shows up to the interview wearing pants and that he brings his resume.

Speaking of… Scheana shows up to Peter’s birthday party with Adam, which surprises no one. I’m glad they’ve finally taken their Instagram relationship public. The real question is… can he hang a TV in under 7 minutes?

Stassi is like, annoyed that Scheana doesn’t want to speak on rumors she doesn’t know about (aka James hooking up with Hope). Oh here’s the Stassi I knew and hated from season 5—the one who is only friends with people so long as they agree with her on all things and hate the same people she hates. That’s not loyalty, btw, that’s blind devotion!

Stassi and Ariana are finally joining forces to throw one birthday party. I would have commentary on this, but I knew this happened over the summer so I no longer have anything to say on the matter. Is Instagram ruining Vanderpump Rules? The title of my next think piece.

Ariana: Stassi just kept following me around and being nice to me so I gave up the energy to be bitchy.

Katie, Brittany, Stassi and Ariana are having a girls’ night and not inviting Scheana. Ariana is kind of being a mean girl by being like “yeah well I haven’t seen Scheana lately, it’s on her to work out her issues with Katie and everyone” rather than sticking up for her supposed friend and trying to get her an invite. Who has no loyalty now?? (I keep referencing this because later on this season, Stassi will come at Scheana for her supposed lack of loyalty.)

Jax and Brittany are going to a cheese shop because they’re starting a beer cheese company. a BEER CHEESE COMPANY. Literally watching Brittany act like beer cheese is a novelty you can’t get anywhere but her Meemaw’s basement is f*cking ridiculous. I’ve had beer cheese in Atlanta. I’ve had it in New York. Go to any artisanal brewery and you can probably find a beer cheese dip that comes with a soft pretzel. Damn, now I want a pretzel.

Brittany is going to invite Raquel to girls’ night, basically because she’s been cheated on by her boyfriend too. Let’s also invite Khloé Kardashian and Cardi B to this girls’ night. It’s Cheaters Anonymous up in this bitch.

Jax re: Raquel: Why would you want to be with someone who literally everybody hates?

LOLLLLLLLLLMFAOOOO IS THIS A JOKE?? Pot, meet kettle who everyone hates.

Jax has started his job back at SUR again. Again, what’s it like to have literally no consequences for your actions? MUST BE NICE.

Wait a sec, did Schwartz just call Katie his girlfriend? Yes he did. THAT’S YOUR WIFE! Or have you forgotten?

Schwartz goes to talk to James about calling Katie fat and the convo goes as follows:

Schwartz: Katie isn’t fat she’s sexy and luscious
James: I know man
Schwartz: Say it. I want you to say it.

You want another man to call your WIFE sexy and luscious? Weird flex, but ok. In predictable Schwartzy fashion, he doesn’t get mad at James or really give him any consequences for what he did. Maybe this is why Kristen has dubbed herself the Karma Police?

It’s girls’ night, and Ariana is SERVING in this see-through red lace number with a red thong. Everyone looks amazing, I’m really loving this. Looking at these outfits has cleared my skin, hydrated my body, and filled up my bank account.

Meanwhile at guys’ night, Jax comes riding in on a motor scooter. All I could think about was:

Jax announces he and Brittany are business owners, and claims they’re getting patented and whatever. I doubt that. Have you even filed an LLC yet? I’m not saying Jax is a liar, but a brief Google search for “Meemaw’s beer cheese” only pulled up a Bustle article.

Brittany tells everyone that she invited Raquel to girls’ night and you can see the group calculate whether they should throw their drinks in Brittany’s face or jump out the window.

It’s so rich that Brittany is inviting Raquel out to tell her that her boyfriend sucks. And yet, she’s still with Jax and is now pledging to be with him FOR LIFE, so?? The cognitive dissonance is astounding. Jax buys tampons one time and all of a sudden we’re meant to believe he’s a completely new person?

I can’t believe Kristen is telling Raquel that James has a really shitty temper. Spoken by the woman who punched James in the face??!? Kristen should get a gold medal in mental gymnastics. F*ck it, they all should.

Katie: I feel like I’m in the Twilight Zone where monsters are allowed to do and say whatever they want without consequences.

We end this episode with Katie going to talk to Lisa to tell her about James calling her fat during Pride. I’m actually here for this Katie because Lisa is saying “James’ language is unacceptable” but not actually vowing to do anything. *Whispers into the void* just like when any high-powered man gets called out for unacceptable behavior. So Katie basically tells Lisa “it’s him or me.” You can tell Lisa is PISSED to not be calling the shots this time. Maybe if these men ever faced consequences for their gross behavior we wouldn’t have to resort to ultimatums! I mean, has anyone else ever thought about how the only person who has truly gotten fired from SUR and never gotten her job back has been Kristen? I have to wonder why that is…

And it’s possible I spoke too soon about this season being good, because this episode was kind of a bore. I tried to make this recap as exciting as I could, but putting jokes into this uninspired episode is like trying to inject life into a corpse… or into Giggy’s hairless body. Boom! And with that, I’m out of here! See you guys next Monday, because I’m pretty sure Bravo is f*cking with us yet again by changing the time of this show. For the record, I DO NOT SUPPORT THIS!