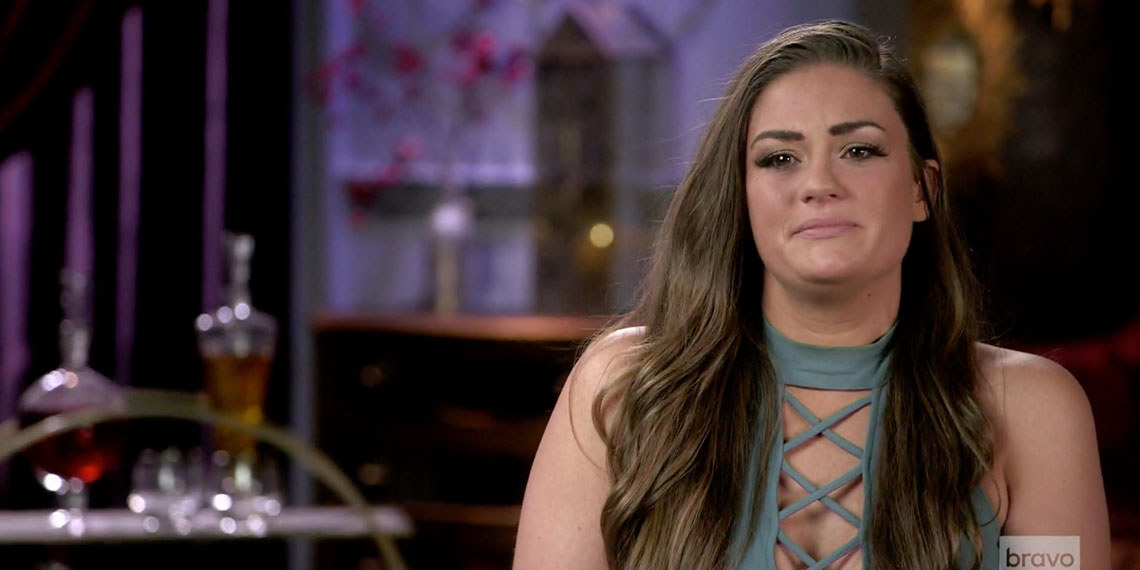 Yeah so sorry this recap is a little late—I was flying back from Coachella yesterday and my flight got delayed two hours. Did I purposefully delay my whole recap just so I could brag about Coachella? No, that would be totally crazy….

Aaaaanywho, this episode starts off smack dab in the middle of Jax’s probably coke-induced meltdown. Jax screams at Sandoval to “tell the fucking truth” and then storms out of there. Tell the truth about what? So you admit that Sandoval is lying about James and Kristen having hooked up?

Sandoval says that Jax “definitely looks like someone who could use medication” as if he’s not on too many drugs already. I’M JUST SAYING. Nobody on this show needs MORE meds.

Lisa’s de-briefing with Brittany after Jax’s meltdown is just another exercise in how deep his manipulation goes. It’s not really worth commenting on.

Meanwhile, Katie is launching a lipstick line through her beauty blog. Okay, I’ll say it: why are all the girls who never wear a bold lipstick launching their own lipstick lines? Like, YES Scheana did try to make bright pink lips happen circa season 1, and she looked terrible, but at least she was taking some sort of beauty risk. I’d sooner buy lipstick from her than anyone who’s always rocking a nude lip.

I forgot that Stassi is still with Patrick at this point. Patrick apparently texted Stassi at 3am when they were all in Mexico to make sure they were okay, and when Stassi didn’t answer immediately he flipped out. So comforted to know Jax isn’t the only controlling psychopath on this show. The masculinity is too toxic. It is too damn early in the week for this.

At Jax and Brittany’s, Jax is going into full-on deflect mode.

Jax: Everyone has done the same stuff or worse than me but nobody gets in trouble.

Okay, like, he’s not WRONG. Kristen cheated on Sandoval. Sandoval cheated on Kristen. James and Kristen have both had public freakouts at SUR. And still, a proper defense for your wrongdoing is not “everybody else did it.” If every one of these SURvers committed a murder, I’m pretty sure all you degenerates would be held accountable in a court of law.

HAHAHAH THEY USED LALA’S SONG AS THE MUSIC IN BETWEEN THE SCENES. I am dead. How much did Randall have to shell out to get that to happen?

James and Lala are in the studio, and is Lala wearing a shirt of her own silhouette? Confidence goals.

James claims he discovered Lala and again likens himself to Dr. Dre and Lala to Eminem. This leads me to believe that neither James nor Lala actually listens to hip-hop. Y’all can’t think of another rapper-protege duo? T.I. and Iggy Azalea? Jay Z and Rita Ora? Kanye and Travis Scott? I spent so long thinking of these examples that I kinda missed the end of James and Lala’s scene. Bye.

This is the happiest I’ve ever seen Tom Sandoval.

Since horseback riding is apparently still a theme of the season, Ariana goes to meet Lisa at some stable place. IDK what they’re called because I did not have a rich upbringing, sry.

Ariana expresses to Lisa that she’s frustrated that Sandoval isn’t pulling his weight about the cocktail book that was Ariana’s idea to begin with. Cool, so he hijacked her project and is now preventing her from moving forward with her own fucking idea? Men are trash. More news at 6. Tbh Vanderpump Rules is just becoming one big PSA on why I should not get into a relationship. As if I needed one. *Opens up my Hinge app and cries into the void*

Katie’s lipstick party or whatever tf it is actually looks pretty nice. Brittany shows up sans Jax. It’s a good look for her. Kristen hobbles in on some crutches because she… stubbed her toe on the wall? Is this for real? Way to pull a Scheana. Next week she’s gonna be complaining about her tooth.

Meanwhile, Carter is talking to Sandoval and Peter about Mexico and the James cheating incident. I really can’t believe that this entire rumor is hinging completely on the placement of a few couch cushions. I will say that Carter asking Sandoval to have Kristen’s back is the definition of barking up the wrong tree.

While that’s happening, Kristen is talking to some SUR-adjacent dude, who apparently just adopted a puppy from Lisa’s dog rescue or whatever the fuck. NO, I do not care if I got the details of Vanderpump Dogs wrong! Just let me live my life. Anywho, Carter comes up and literally says, “Why are you talking to dudes? Why are you talking to other dudes?” Ah yes, v healthy relationship we’ve got here.

Then he starts singing “Storiesss how they be changin!” It’s a banger that’s going to #1 on the charts. It’s clear that Carter doesn’t trust Kristen, which makes me wonder why they are even dating. Carter admits that he doesn’t trust Kristen because of her past with Sandoval, and tbh I can’t quite blame him but at the same time I’m pretty firmly on Kristen’s side here. She seems significantly less crazy than she was during like, the first four seasons of Vanderpump Rules.

Also watching Kristen hobble away from Carter on her crutches, while crying, is a piece of television that deserves an Emmy on its own.

Lisa is such a messy bitch, asking Katie’s mom when Schwartz and Katie are having a baby, only to be like “Schwartz isn’t ready to have a baby.” Then why you asking??

Jax is like, stressed out over his apparent mortality or whatever and wants to talk to Kelsey, but she’s in Africa with all the little birdies and all the little monkeys. Too bad, so sad.

Stassi and Brittany go somewhere private at the party to talk about Jax and Stassi asks Brittany if she thinks she’s wasting her prime years. She also says that if Brittany and Jax got married, she doesn’t know if she would attend the wedding. A lot of deep, dark stuff is just casually being thrown out in this convo.

The next day, Stassi is talking to Patrick about her event, and if I’m not mistaken, he says, “event planning? You?” and then I jump through my computer and strangle him.

Watching Patrick speak is literally like reading r/neckbeards—he just uses a bunch of huge words that make zero sense in context and just banks on Stassi not knowing the definitions of those words so she can’t call him out. Then Stassi apologizes for not texting Patrick back in Mexico (a total non-issue if you ask me) and Patrick immediately is like “stop making this about you!” But you… are the one with the problem… with what she did… soooo…. what? I feel like I’m taking crazy pills.

Patrick: What was that guy’s name? John Stark? You keep killing off all the Starks and then we’ll never make it to winter, and all you need to do is hold the door!
All of us:

I thought I hated men already, and this show is really not helping. Years from now, when I’m adopting my sixth dog, I will point to this show as what went wrong.

Katie and Tom are talking about having babies in a baby voice. I’ve gotta say, that’s not a good start to that conversation.

Then Katie starts talking about her depression because of her PTSD while Sandoval like, butters some bread or some shit. Seriously, he is not even looking her in the eyes rn. Then Katie starts crying about how this is the first time in like, 10 years that she’s felt like herself. Cool so I can’t really make fun of this. They do their wedding dance in the middle of your living room while Schwartz like, beatboxes their wedding song. It’s a scene straight out of the shitty romantic comedy I watched on the plane ride back to New York (it was Something Borrowed, for those wondering). It’s actually pretty sweet. Really wondering what emotional blackmail Katie and Schwartz have on the Bravo producers to be getting such a flawless edit this season.

Except like, does nobody think this entire line of conversation is weird? “I was a different person for the past 10 years and now I’m finally the person I am” — to me this just sounds like you were one person for 10 years, and now you’re a different person. It’s k, it happens.

Later, at Jax and Brittany’s house, Jax walks in and he literally goes from “it’s so hot outside” to “I’m so unhappy.” Smooth move, Ex Lax. He then proceeds to directly quote Reiki Kelsey with like “you deserve to be treated like the person that you are and I’m not that person.” And then he BREAKS UP WITH HER.

Holy shit. I will say that I am actually incredibly impressed with Jax that he’s actually growing the balls to break up with Brittany and admit that he needs to be by himself, rather than just continue to cheat on her and beat her confidence into the ground until she finally breaks up with him.

And then he’s right back to old Jax, acting floored that Brittany is upset and wants Jax out of his house because he just dumped her on national television. I wonder if he consulted with Arie before this breakup? I love that.

I’m honestly betting that Brittany and Jax are back together next episode, acting like nothing happened. We’ll see if I’m right.