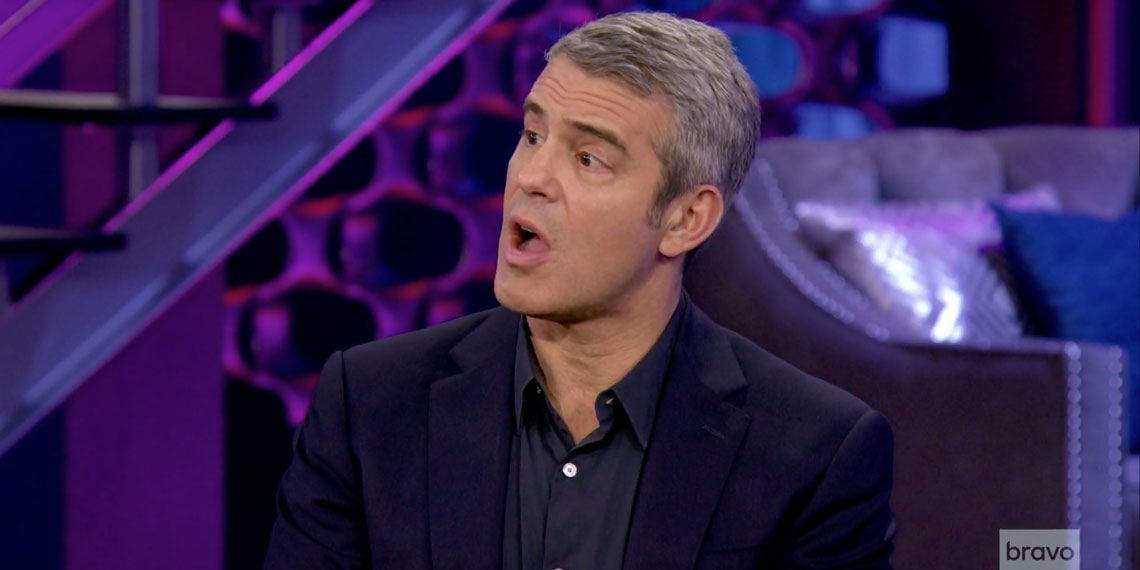 ‘Vanderpump Rules’ Reunion Part 2 Recap: James Is The Realest One On Here

We open this week’s reunion with Scheana’s meltdown, where she dramatically storms off stage to… get her makeup fixed. Never gets old.

Jax’s main insult fof Scheana not calling him is not that what she did was wrong, but that she can’t keep a boyfriend. Sure, those things are related. 30 seconds in and the misogyny is strong.

Andy: Lala I want to talk about your man. He’s a successful producer…
Everyone:

Hearing Lala say “Martin Scorsese loves the show” in a baby voice while batting her eyelashes is just giving me the heebie jeebies. Also, do y’all really believe that?? Cause I’m not buying it.

Andy: What kind of gifts does your man give you?
Lala: Shoes, purses, cars…
Scheana: Materialistic things

Oh right, I forgot that Scheana doesn’t like gifts. Right. And I’m sure if Rob ever bought her a gift, she’d give it back because she hates gifts so much. Yep.

Ok so I think it’s pretty ridiculous for Lala to claim that she has a boyfriend when she very clearly has a sugar daddy. No shame in the game, but let’s call a spade a spade.

Lala: Why do I have a sugar daddy when James is living on some guy’s floor and you don’t say that he has a sugar daddy?

Ok so those are clearly not analogous situations. No sugar daddy would ever succeed if he was like “yeah so you can fuck me, a gross older man, in exchange for a coveted spot on my floor.” James is in a weird Craigslist roommate arrangement; his and Lala’s situations are not the same thing.

Honestly I kind of love James for being like “sorry I called Randall a fat old man. And I’m sorry for doing it again now.” Dare I say… James is the realest person on this entire show? I’m sorry but Randall is overweight. And he is older than the rest of this cast. Therefore… where is the lie?

Jax swears on his father that he only slept with Fatih one time. ON HIS FATHER. So next season, when Kristen orchestrates a texting ring to figure out that Jax hooked up with Faith multiple times, is Jax’s dad going to come back from the dead to haunt the shit out of him? Sorry, too far?

My favorite thing of this reunion is Scheana making under-the-breath comments and nobody acknowledging her. And now everyone’s yelling at Scheana, so there’s no way I can even attempt to type everything that’s going on.

It’s actually kind of crazy that Schwartz isn’t really even denying making out with this girl, and his best defense is just “I don’t remember.” THAT’S NOT THE SAME. That doesn’t mean you didn’t cheat! Why is Schwartz getting a carte blanche for cheating on Katie? Something’s going on here besides all the edibles these two are taking. Maybe they’re in an open marriage?

Katie: Life is very short and tomorrow is never promised.

Damn girl, give me the number of your plug. I also think it’s funny that she’s saying all this wearing like, 16 crucifixes.

I’m sorry, did Schwartz say that he felt like “a possum’s prick”???

^What I’m going to tell my parents when they ask why I don’t have my life together. Thanks, Tom!

I think Kristen’s comment about Stassi, “She acted like an asshole so I treated her like an asshole” is kind of oddly poetic. So what does that mean? You wiped her? No ok you’re right, I’ll see myself out.

I didn’t miss the entire bit about James’ relationship with George Michael, but I will not be recapping it. It’s weird and I don’t know why we’re doing it.

YES it’s time to revisit the Scheana/Rob not loving her rumors and how Scheana set Brittany up with Adam. Let’s all watch closely as she tries to deny something she blatantly said on camera.

Scheana: I wasn’t trying to set them up so she would cheat on him.
Stassi: But you said on camera that it was.
Scheana: Yeah I say dumb shit sometimes, we all do.

Ok so when everyone else says things it’s the truth, but when Scheana says something, she doesn’t mean it and we should all know that? It’s Scheana’s world, and we’re all living in a totally different world where reality is a thing.

Lala: Yeah Adam is cute, but who wants to fuck a cute guy?

Billie and Jeremy are still pretending to hang out, and now it’s time to revisit Creeper Gate! Grab onto your panties, I’m sure Sandoval is about to say some problematic shit. Oh. Actually, he doesn’t say anything. Neither does Ariana. Hmm. This isn’t the reunion I bargained for. Are they, like, ok?

Andy: Has your dating life improved since you’ve been on the show?
Billie: No!

We’re talking about Reikelsey, and all the girls hate her for just massaging Jax’s ego without actually understanding any context of what was happening in his relationships. Thank god somebody said it. Also James calls her out for hugging Jax for way too long. And Andy brings up that Jax said he loved her! Sometimes I really underestimate these peoples’ intelligence.

All the guys are like “you should stop with all this salacious slander, it’s not sexual at all” and all the girls are like “that’s bullshit and you know it.” Ok maybe it was only Schwartz who used the words “salacious slander” (gotta use that college degree somehow), but the consensus was the same: the men think nothing is inappropriate about that relationship and the women clearly do. Hmm. Wonder why that is.

Oh god, now we’re talking about feminism with Lala. Lala says there’s not one way to be a feminist, and that’s true, but you also can’t reduce feminism to just one thing. That’s like… kind of the thing with feminism. Sexual empowerment is great, but that’s not the entire movement of feminism. But whatever, you guys didn’t come here for a feminist rant. We can all agree that Lala’s feminism is missing more than half of the point, and like, peak white feminism, right? Right. Moving on.

Good, Andy asks Stassi how she feels about Lala’s version of feminism. Jesus, this is the blind commenting on the fucking blind. Brittany’s like, “women should support each other and not tear each other down.”

Would this even be Vanderpump Rules without Jax butchering a very common phrase? No, it would not. So I thank him for that. And honestly? I’m not even mad.

Andy asks Katie basically how her personality did a 180. She says, “I just decided to take inventory of myself and be happy with who I was” except we all know she meant “I’ve just been taking a lot of edibles.”

It’s also bullshit to listen to Schwartz call Katie a nightmare of a person, even if she was back then. The difference is, we didn’t marry her!

Andy’s face while Katie is retelling the story of her accident is honestly everything.

Lol what, Tom Schwartz was a physiology major?

I just think it’s funny how Katie starts talking about how it’s good to finally feel like herself and Schwartz immediately cuts her off to be like “yeah I’m glad you finally changed into the person I wanted to be with.” Cool. Great. IDK if my roasting skills are at a delay this morning, or I’m just so floored that I am without speech this episode. Probably a little bit of both.

The episode ends with everybody crying but me, because I am a black soulless pit. Or is it because I didn’t think that conversation between Schwartz and Katie was that moving, because Schwartz should not get a gold medal for merely accepting his wife for who she is? I will let you all decide.