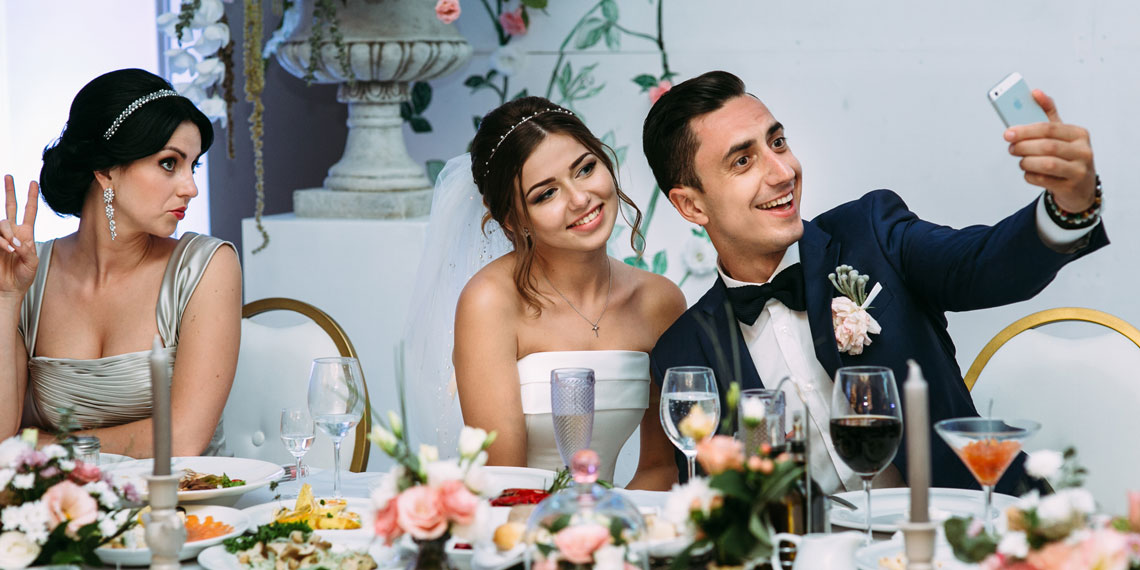 Unspoken Rules Of Wedding Etiquette You May Not Know

Wedding season tends to bring out the worst in us. Not only do we have to give up attention for like, the whole day (and possibly a weekend *shudders*), but we also have to endure a lot of strangers in a short period of time. It shouldn’t be a surprise to any of you, but being a guest at a wedding comes with certain rules; some better known and adhered to than others. So, to not make yourself out to be the biggest asshole at the upcoming nuptials, here are some do’s and don’t’s of wedding etiquette for those of you about to sit through a super spectacular wedding.

This is kind of a no-brainer, but it bears fucking repeating. Is it really that hard to mark YES I’M COMING on the card, put it back in the prepaid envelope, and send it back to the soon-to-be-hitched couple? You don’t even have to find a stamp. What is difficult about this?? Don’t be a dick. Send back your RSVP on time and save the bride the headache of having to fucking text you a few weeks before the wedding.

Unless your invite specifically said “and guest” do not fucking show up with a rando. Likewise, do not text the bride or groom a week before the wedding explaining how super deep and meaningful your one-month relationship is and go on a monologue about why you should be allowed to bring so-and-so. This rule also goes for children (shocking, I know). Unless the invite said “The Whole Fam-damnily” then don’t assume that all 10 of your kids are welcome to come and ruin what should be an adults-only event. Kids are terrible.

3. Do Tell Them About Your Weird Food Allergy

If, for some reason, you break out into dance hives when you smell gluten, or your eyelids turn inside out when you see peanut butter, go ahead and scribble that fascinating info down on an RSVP card—even if there isn’t a place for it. Trying to navigate vegans, vegetarians, Celiacs, breathatarians, raw-fooders, and general weirdos gets easier when you have specifics. The more you know.

The bride is trying to make a fucking entrance, both during the ceremony and at the reception. Having you wander in 30 seconds before start time (or, God forbid, after the start time) takes the focus off of her—which is prime reason you’re now cruisin’ for a bruisin’ from her new hubby. Lol but seriously, don’t be a dick. If the wedding says 3pm, be there 15 minutes before. A lesson that should be applied to life, if I’m being honest, because I’m fucking tired of waiting at my brunch reservation for 15-30 minutes because SOME people think reservation start times are merely a suggestion.

5. Do Not Text The Bride

May seem like a nice thing to do, but, you could be wrong. I know a bitch who texted my friend, the bride, as she was getting ready. “Hey how are you??? Are you nervous??? It’s raining but will probably stop. Can I bring you anything????!!” I appreciate the care and need for companionship, but chill tf out. This bitch is getting married today. She’s got mimosas at her fingertips (which are being painted). Her stomach feels like it’s going to fall through her asshole. She hasn’t had a carb in three months. The last thing she needs is a bunch of people texting her asking how her day is going. Leave that bitch alone.

6. Do Not Wear White

This is like, a pretty well-known thing, but due to recent questions from people I know, this clearly isn’t well known enough. Do not, if you value your life, wear white or cream or ivory or ivory blush or eggshell or whatever the fuck stupid synonym fashion marketers are using now to denote white. Really, avoid anything that could be potentially light or white enough to piss off the bride. It is an unspoken rule that you never, ever wear white to a wedding that isn’t yours (unless the bride weirdly requests it). That means you, Kelly.

MMMHMMM. You know who you are. Nothing is ruder than heading to a wedding and not bringing a gift (or mailing one later … or sending one before the wedding). The bride and groom have stressed over the decor, the food, the ceremony, and how to entertain you fucks. You get an invite, you buy a gift. End of fucking story. Furthermore, and maybe if you DIDN’T know, etiquette says that even if you CAN’T attend the wedding, you still owe a gift. So, by my count, that’s about 10-15 gifts I’m still missing. Some from family members. On his side. MMMHMMMMM.

8. Be Nice To The Weirdos At Your Table

I know getting stuck at a table full of people you don’t know isn’t the most awesome thing ever. But have a drink, put on your big girl panties, and make the most of it. Nothing is worse, as a bride, than stressing about how people at certain tables are going to get along. The couple did their best to put you with people you may like. So, like, make some convo. If you hate them, you never have to see them again, so just suck it up for a few hours.