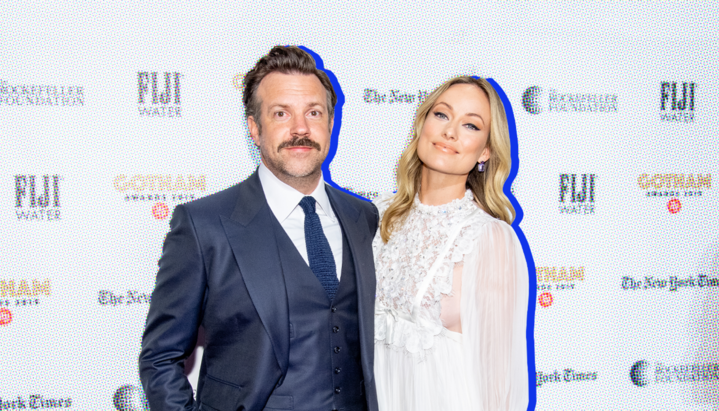 Unpacking All The Olivia Wilde And Jason Sudeikis Drama

Olivia Wilde can’t seem to catch a break. First, there was the whole Don’t Worry Darling fiasco—that disastrous press tour, “Miss Flo,” spitgate! And now, this. Just when the dust has seemingly settled from the DWD mess, there’s new drama with her exes. Yes, plural! There’s an ex-nanny, an ex-fiancé, and possibly an ex-dog.

In case you missed it, a former nanny recently gave a bombshell interview to the Daily Mail, and man, did she have some tea to spill! About Olivia, her ex-fiancé, Jason Sudeikis, her alleged affair with Harry Styles, and some sort of magical salad dressing. And, now, Twitter is losing its shit.

So, get comfortable, because this one’s a lot to unpack.

Way back in 2011, pre-Holivia, Jason Sudeikis and Olivia Wilde started dating. By early 2013, the couple had gotten engaged and were living a blissfully loved-up life, complete with “Kenyan marathon” sex. Fast-forward to November of 2020, and the days of marathon sex and wedding planning were over. The pair, who at that point shared two children, Otis and Daisy, had called off their seven-year engagement, seemingly out of nowhere.

Even more surprising, Olivia stepped out with Harry Styles in January of 2021, little over a month after her breakup with Jason. Initially, though, sources claimed that they had actually broken up at the beginning of 2020, making her moving on so fast slightly less scandalous. But in an interview with GQ, Jason confirmed that, no, the split happened in November and, yes, it was also a shock to him.

Then, in April of 2022, Olivia was at CinemaCon promoting her new film, Don’t Worry Darling (you know, the one where she met her new beau, Harry) when, bam! Drama. She was served custody papers while onstage. Literally, a process server walked up, on stage, and handed her a legal document mid-sentence. Afterwards, Jason said he had no idea she would be served in such a public and “inappropriate” manner. Meanwhile, Olivia went on to slam her ex for the “vicious” act, saying “But, you know, sadly, it was not something that was entirely surprising to me. I mean, there’s a reason I left that relationship.”

That was in August. By September, Olivia was getting some seriously bad press thanks to Don’t Worry Darling, Shia LaBeouf, and rumors of an on-set feud with fan-favorite Florence Pugh. The tremendously awkward red-carpet premiere in Venice only added fuel to the already blazing fire.

The film has now been in theaters for nearly a month, and while the reviews are mediocre at best, the constant ‘Olivia Wilde’ headlines have started to die down. That is, until now.

A former nanny for Jason and Olivia just gave an absolutely bonkers interview with the Daily Mail and, if even half of what she says is true, the situation is a whole lot messier than we’ve been led to believe.

According to this ex-nanny, Olivia moved out of her and Jason’s shared home in the fall of 2020, shortly after filming for DWD began, citing an outbreak of COVID on the set. Allegedly, the real reason was her burgeoning relationship with Harry. When Jason found out, there was an explosive argument followed by their breakup. But what really makes this story wild (no pun intended) are all the nitty gritty details shared by the nanny.

Apparently, after their breakup, Jason became enraged when he found Olivia in the kitchen making a salad with her “special dressing” for Harry. They got into a fight, one that Jason for some reason videotaped, before he chased her outside and tried to keep her from going to see Harry by lying down in front of her car. Jason was especially upset about this salad dressing and told the nanny, “She has a special salad dressing she makes for us and she’s taken it to have it with him now.”

But the nanny says that Olivia was still giving Jason mixed messages after that, sending flirty texts, leaving loving voicemails, skinny dipping in their pool, and even sharing a bed with him. That is, until she and Harry went public the following month.

After that, the nanny claims that Olivia became so infatuated with Harry that she basically ignored everything and everyone else, including her dog. Allegedly, she chose to get rid of her dog so that she could spend even more time with Harry.

Since the article has come out, Jason and Olivia released a joint statement to the Daily Mail saying, “As parents, it is incredibly upsetting to learn that a former nanny of our two young children would choose to make such false and scurrilous accusations about us publicly.” Further, they claimed the woman in question has spent 18-months harassing them and their loved ones.

While Jason has yet to address the salad dressing specifically, Olivia took to Instagram Tuesday night to post a page from Nora Ephron’s Heartburn, which just happens to contain instructions tor making a dressing. The plot, just like the dressing, continues to thicken.