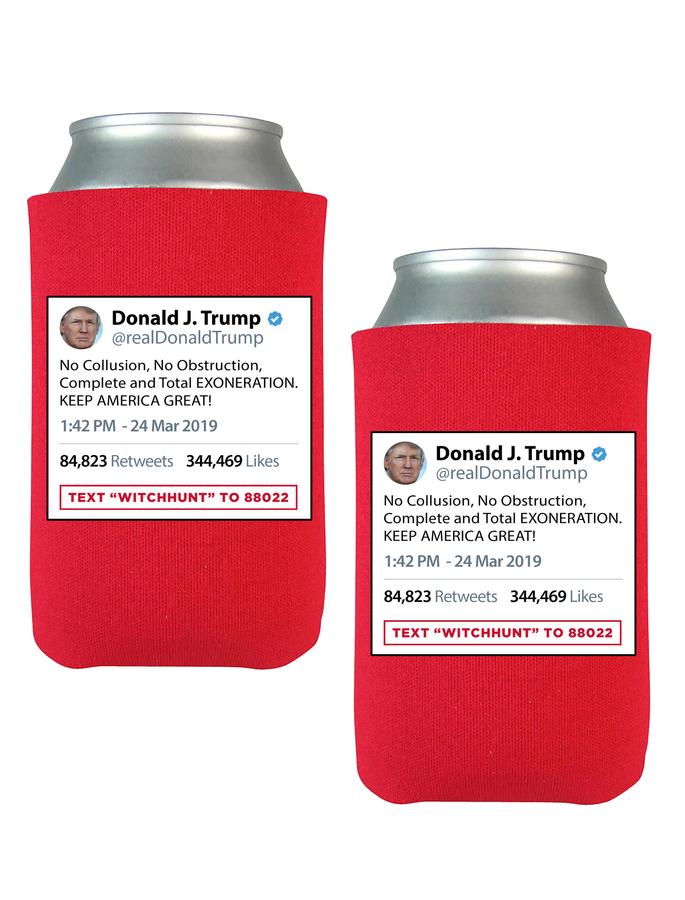 The money’s in the merch is a phrase that I’ve had ingrained in my mind ever since watching Almost Famous — it’s right there next to my unwavering love of Kate Hudson and the entire Hudson/Hawn clan. Usually, merch is a fun must-grab after three tallboys at a concert. However, it’s hard to imagine that being the case at a rally for one President Donald Trump. Seeming to lack any real vision or creative direction, Trump’s campaign appears to be monetizing his maniacal tweets in a recently added line of merch. Let us just say: it is just so bad. Like, even Kristen Doute, T-Shirt line queen, would be taken aback by how bad this merch is.

We’re guessing these were custom made for Justice Brett “I LIKE BEER” Kavanaugh, who enjoyed it so much, the campaign couldn’t resist making it for the masses. I can’t imagine anyone selling merch with their tweets on it, with the number of likes (at the moment the screenshot was taken…) and the time stamp, besides maybe a C-list YouTuber. Can’t wait for the Official White House channel to teach me how to do a proper smokey eye.

Like this one, many items encourage readers to text “WITCHHUNT” to the included phone number with zero additional context. Genius!

For when you want to share the sentiment but are not presently drinking a beer.

This number borrows from the Facebook feature that allows users to verify their safety to friends and family during a serious crisis, which could be tone deaf if it made any sense whatsoever. Fitting since Facebook DID help the Russians spread information across its platform which ultimately compromised our election. What a fun callback! Pairs perfectly with one of those “I’m With Stupid” shirts with an arrow pointing to whoever is wearing this.

This one celebrates the findings of a report Trump refuses to let anyone actually see. “For 2 years Robert Mueller was a god to the Democrats. Now they HATE his findings!” the description reads. “Fight back against the Delusional Dems! Buy your ‘Collusion Delusion’ tee now!” Did Trump write these himself?

Enjoy your own “executive time” with a daily reminder that the president was totally exonerated. Wait…

Good for whenever you want to celebrate the excesses of executive power, but in a casual way. “Want a WALL? Love the VETO? Get a shirt!” the description reads.

Like, was this made on an Atlantic City boardwalk? Honestly, that is his brand.

To make a splash at all the pool parties you definitely won’t be invited to. Disturbingly, this suit comes in “juniors sizing” as well.

Hmm, wonder why this was on sale…

We’re going to go buy T-shirts from one of the 500 potential Democratic nominees now.

All images via DonaldJTrump.com