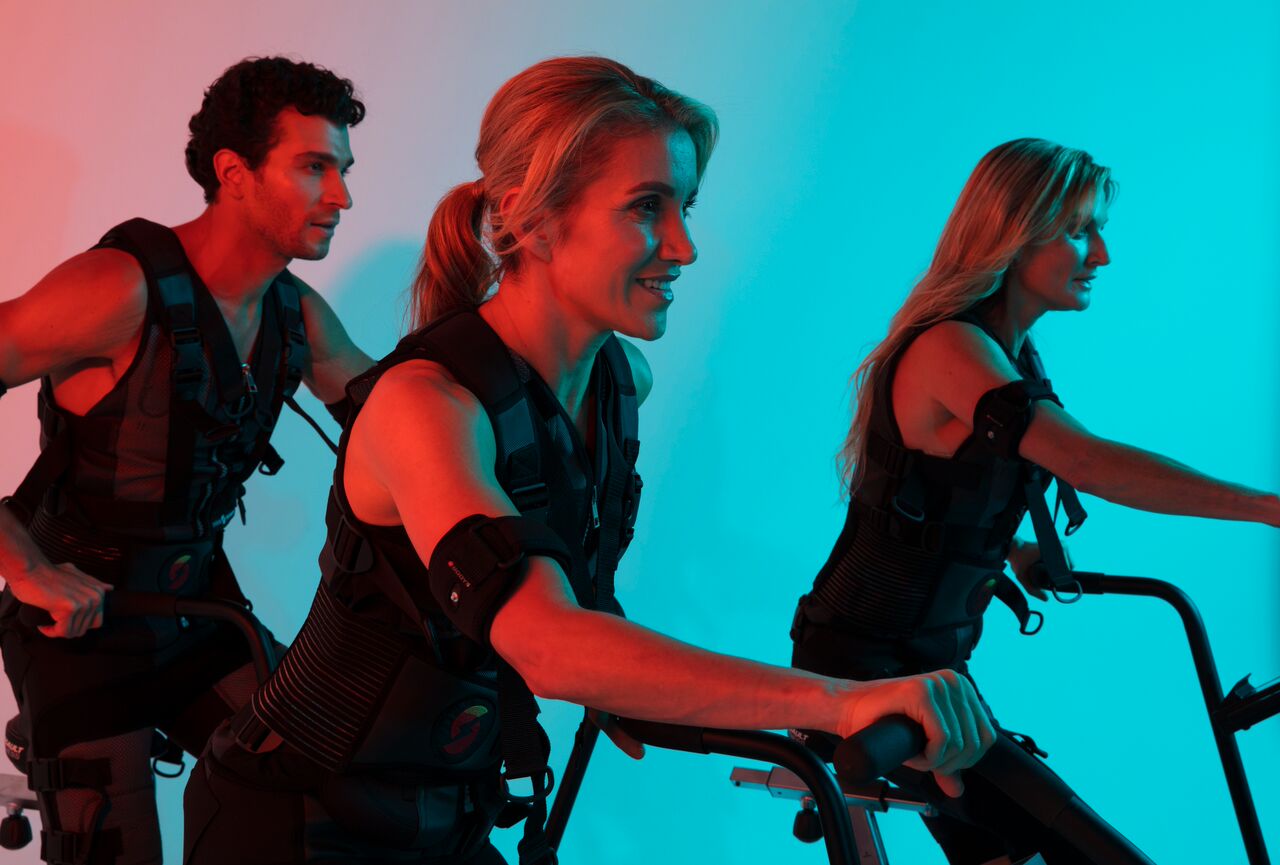 If you’ve read my articles in the past, you may already know that when it comes to health and fitness trends, I’m down for anything. I’ve tried every extreme fad from Intermittent Fasting, to Kourtney Kardashian’s supplement routine, to basically all of Gigi Hadid’s favorite workout classes. Anything’s fair game. I live in New York City and there are bizarre workout classes at every turn, so when I first heard of this new Shock Therapy workout that uses Electric Muscle Stimulation to shock your muscles, I obviously signed up immediately. The experience was one of a kind and I’d like to share every detail.

Before you start attacking me about the legitimacy of this workout, let’s establish that EMS training (aka the shock therapy workout) is actually pretty well known in Europe, and while it’s new to America, it’s been popular in other countries for a while now. In fact, some celebs even travel abroad to make shock therapy workout classes a central point in their trip. I mean, Romee Strijd literally swears by it, so I think we can all get on board with her. (I heard she does car commercials… in Japan.) Other celebs who do EMS training include Ashley Graham, Roger Federer, Alessandra Ambrosio, and Penelope Cruz.  Some people claim the science behind it hasn’t been universally confirmed, but nonetheless, it’s a 30-minute class and the concept is fucking weird, so I thought I’d give it a shot anyway.

Shock Therapy, also known as EMS (electric muscle stimulation) training, is designed to stimulate the nerves that make your muscles contract, so your body is basically doing a lot more work than you’re actually putting in. The claim is that you’re getting the results of a three hour workout condensed into one half-hour because of these electrical impulses that are activating 90% of your body’s muscles *at once.* This is accomplished by wearing a special power suit that connects your muscles to a machine that “supercharges” your body through EMS. For reference, in a usual bootcamp-style class, your muscles will contract somewhere between 3000-6000 times, but in this half hour shock therapy workout, the technology allows your muscles to contract anywhere between 36,000 to 45,000 times. It’s shocking. Literally.

I looked into a specific studio that just opened and has been starting to get some recent press, so I bravely took the risk of signing up even without any Yelp reviews available. Thanks to social media, I learned that Ashley Benson and I are pretty much pioneers of the place, and I’d like to get that in writing, please. After stalking the website and reading about the EMS method benefits, I reserved a spot in the 10am shock therapy workout class and managed to drag a friend along. Poor girl. She was even hungover that morning.

We showed up in our usual workout attire, but we were immediately told we would need to change into the studio’s plain black long-sleeve shirt and leggings they handed to us as we arrived. I was pretty pissed about this because I wore my favorite Bandier two-piece set, but whatever. We got dressed and were then buckled into our “power suits,” which felt like some heavy wet suit you would wear to go swimming with dolphins or something. It felt super bulky and tight, and yes, it was wet. Apparently the electrical impulses connect better to your muscles that way. I shrugged and went along with it.

The classes cap at six people to ensure personal attention, and you definitely get that. Like, our instructor couldn’t have been nicer and more attentive. But then again, at $55 a class it would kinda suck to be ignored. When we got into the room, our power suits were turned on and suddenly the whole “shock” part made sense. It kinda felt like I had little firecrackers all over my body. It wasn’t painful, but more like a full-body tingling. The instructor even asked us if we wanted to turn up the resistance on certain body parts to feel the burn in specific places. I told him to raise the resistance on my legs and abs, which I ended up regretting the next day when I was too sore to sit down or laugh.

The actual workout wasn’t too difficult, but this goddamn wetsuit with the shocking technology made everything a thousand times harder. We went through a few different circuits, first doing bodyweight moves like squats and high knees, and then peddling the shit out of these Airdyne bikes—which, by the way, are like spin bikes that ate three edibles and can’t get off the couch. This thing makes your Peloton bike look like a toddler’s plastic tricycle.

By the time the class was over, I wouldn’t say I felt completely defeated, but it definitely kicked my ass more than I thought it would. I mean, it’s not like my hands were too shaky to reach for my water bottle (see me separately about my first Tone House experience), but I was pretty dead. I apologized to the instructor for saying “fuck” 50 more times than the average New Yorker, and I unbuckled my wet suit and bounced.

Overall, I’d say this was a cool experience but I’ll probably never go back. I mean, not only because I’d go broke after a few more sessions, but because it seemed like more of a one-time experiment than a regular workout spot. Also, I really don’t think I can bring myself to putting that power suit on my body again without experiencing some sort of PTSD. It was a good workout and I was sore the next day, but it’s hard to say if the whole EMS magic really lives up to its claims. So, I won’t be booking another shock therapy workout class right now, but I’m happy I did it.

(For the record, Ashley Benson, if you’re reading this, I’d go back with you if you’re down.)