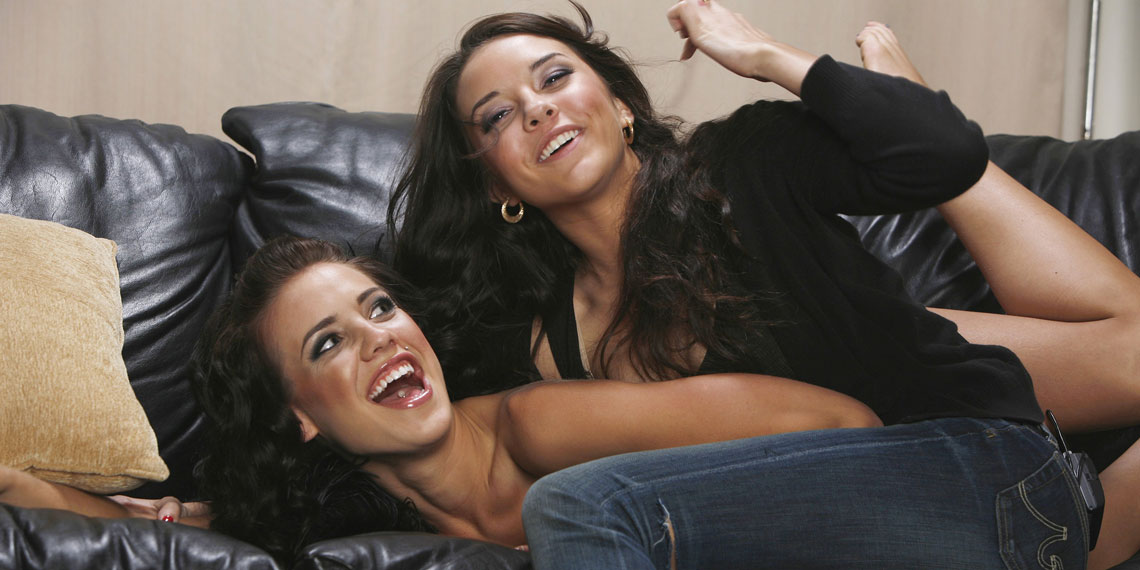 When I was growing up, my parents were pretty laissez-faire about raising my sisters and me. They would just give me Ritalin, let me watch trashy reality television and South Park unsupervised, and pawned me off to a nanny. But to their credit, they were a little harsh because they wouldn’t let me watch Friends because they deemed it “inappropriate.” (BTW later in life I found out they wouldn’t let me watch it because it sucks.) Anyway, I’ll save my bitching about my mom and dad’s parenting skills for therapy and talk about all of my knowledge about the best of the worst trashy reality shows from our childhood that you totally forgot about. Let’s take a trip down memory lane, which is probably littered with Four Loko cans, G-strings from Kitson, and Ryan Cabrera’s used condoms.

Sunset Tan was the go-to tanning place for celebutantes like Kim Kardashian and Lindsay Lohan. The main star of the show was Jeff, who is so tan that you would think he has Rachel Dolezal syndrome. He takes himself awfully seriously for someone who spends his days managing a tanning salon, keeping Ed Hardy and Von Dutch in business, and being one of only seven people on the planet who is a die-hard fan of Hoobastank and Burn Notice. The other noteworthy characters on the show were obviously The Olly Girls. They’re literally just hot chicks named Molly and Holly whose sole purpose was being cute and charming to the customers to distract from the fact that they were incompetent. I can totally relate because that was literally my experience when I worked at  SoulCycle for three months. Maybe I’m biased because my mom has taken me to get fake tans since I was 13, but the highlight of this show is when this L.A. stage mom took her 8-year-old daughter to get a fake tan for her school pictures. The Sunset Tan employees suggested that the child get the same tan Lindsay Lohan always gets. I have no idea whatever happened to Jeff or the Olly girls, and TBH I don’t really care. I’m far more emotionally invested in finding out whatever happened to the little girl who got the Lindsay Lohan tan. My guess is she dropped out of Arizona State because her communications major was just too grueling, met two of her four husbands while being a bottle service chick at Encore Beach Club in Las Vegas, and now is the proud owner of a condo in Reno. At best, I’m sure she’s shilling ItWorks, and at worst, I bet she’s something an aspiring social media influencer.

Pretty Wild  is perfect reality television. The premise of three sisters with a stage mom sounds exactly like Keeping Up With The Kardashians, but trust me, Pretty Wild is an entirely different breed. I mean, when Alexis Neiers was vying for a role in a Mickey Avalon music video, she advocated for herself by saying, “The line in the song says ‘sliding down from heaven on a stripper pole,’ and that’s totally me!” And that, in essence, is Alexis’ charm. The show is infamous because it was filmed when Alexis was under investigation for her involvement in The Bling Ring, but it’s even more infamous for the voicemail Alexis left for so-called “journalist” Nancy Jo Sales for completely misrepresenting her in an article for Vanity Fair. Alexis verbally incinerated her out in such a millennial, hyperbolic, and bitchy way that she would be a perfect fit at Betches. There were underrated moments that are also worth talking about, like that time Tess went on an awkward AF bowling date with Ryan Cabrera or when she ended up dating Max, who is a musician that invented a music genre that’s called—wait for it—electro indie pop. Also, let’s talk about the fact that when Alexis pleaded “no contest,” her response to going to jail was, “If Buddha can sit under a tree for 40 days, then I can survive jail.” I can’t believe Lauren Conrad, who has the charisma and  cloying innocence of an American Girl doll, has built an empire and remains in the public eye while the girls from Pretty Wild have mostly faded into oblivion.

Sidenote: While these girls are fun to satirize, they actually went through some dark sh*t while filming the show and are now doing really well in life. Alexis Neiers came forward and said she and Tess were actually struggling with crippling drug addiction during the show. Alexis now is married to a man who runs a rehab center and has two kids. She recently had the charges against her expunged because she has done so much charity work for drug addicts. Tess is sober, engaged, and has a baby. She sells homemade honey because… well, I don’t know why. But it’s a better hobby than doing practice Playboy shoots with her mom. Gabby recently got married too. No word on whether or not the mom got help for her tic that always made her say “and so it is.”

Anyone who watched The American Meme knows that Paris considers anyone who comments “YAAAASSSS QUEEN” and “iconic!” to be a personal friend. With that being said, I don’t understand why a woman with such low standards for friendship would have a reality show where you had to compete to be her friend. Paris would come up with the most ridiculous reasons to kick the contestants to the curb. Denouncing some of the contestants because they were only on the show for fame? Sweetie, you invented the concept of being famous just for being famous. Criticizing a contestant for drinking and doing drugs? You got a DUI and got arrested for possession of cocaine. Throwing someone off because the guys from Three Six Mafia said she seemed fake? Maybe you shouldn’t take friendship advice from guys who consider Lil Jon and Juicy J to be part of their inner circle.

Rock of Love may be so trashy that it makes me want to bleach my brain with the same bleach these girls used for their hair, but it’s still an enjoyable level of trashy. The contestants were the crème de la crème of wet T-shirt contests and monster truck rallies. It’s awkward enough living in the same house as girls that are competing for the same man. However, it was probably even more awkward for these women to be in the same house together because I’m sure they’ve all slept with at least 5 of the same NASCAR drivers and lead singers of Van Halen cover bands before participating on Rock of Love. One of my favorite VH1 reality show moments of all time is when a contestant (who was nicknamed “Rodeo,” BTW) was telling Bret Michaels about how she got into a horrific accident and was told she would never walk again. It was a touching story because she ended up recovering and became a personal trainer after what she went through. Bret ended up totally killing the only moment of substance that has ever happened on a VH1 show by comparing this woman’s traumatic accident to the fact that he has diabetes. In case you’re wondering whatever happened to these women after the show, I know that one of the contestants played a hooker on It’s Always Sunny. At best, I’m sure the rest of the contestants are now ring girls at amateur boxing competitions. At worst, I’m sure they work the Wednesday afternoon shift at a strip club.

‘A Shot At Love With Tila Tequila’

You know it’s you’re in for a wild ride if the HBIC of the show’s safe word is “Keep going.” Tila Tequila was known for being the queen of MySpace back when that site was relevant. Nowadays, she’s been banned from Twitter because she’s completely batsh*t. So next time you feel bad about yourself when looking at a picture of Alexis Ren, bear in mind that much like every social media interface, Instagram will fade into oblivion in 10 years and Alexis will probably be a model who holds a suitcase on Deal Or No Deal. Anyway, A Shot at Love was groundbreaking because it was the first bisexual dating show. Of course, it still carried on certain reality show traditions, like having female contestants with intentionally misspelled names (special shout out to Krystal, Brandi, and Ashlii!), having the token virgin contestant (who, surprisingly enough, was a guy), and of course, the winner and the low-rent bachelorette broke up, like, two seconds after the cameras stopped rolling.

Ariana Grande is everything to me, but this MTV show was the origin of “thank u, next.” Next was totally Tinder if it were a reality show. Think about it. The contestant entered with some outrageous and salacious facts about themselves that may have embarrassed their mothers, and the object of the contestants’ affections just said “Next” if they weren’t about it. Based off the insane fun facts and lack of self-respect these contestants had, I’m guessing participating on Next was just preparation for when they inevitably ended up in a bang bus porn. They may have lost a sh*tty reality show, but at least they had a shot at winning an AVN award! Am I allowed to say that on this website? Because I just did.

If I ever want to fall asleep, I can just binge watch 8th and Ocean. It’s probably a healthier option than Ambien, because last time I took that I ended up trying to give myself a Brazilian and feel asleep halfway through. But this show was as excruciating to watch as it was having to take off those waxing strips the morning after that were basically embedded in my skin. I mean, the storylines were as captivating as motel art or listening to elevator music. Look at some of these episode descriptions:

Okay, first off, karaoke is fun if you’re drunk, but when you’re sober it’s like a step above going to a paint your own pottery place. Also, going bible study is such a snoozefest and the only time shoving Jesus down a someone’s throat is entertaining to watch is if they’re on the receiving end of an intervention. While these plotlines are relatable, they’re BORING. However, when you’re that good-looking, you’re not obligated to be interesting. And while the show itself isn’t great, it’s totally worth writing about because the theme song “Beautiful Love” pierced every teenage girl’s soul. It was any teenybopper’s away message on AIM or yearbook quote at some point. With that being said, I think it’s fitting to end this trip down memory lane with this ballad.

Oh, and P.S.: Special shoutout to “HangryMartini” for telling to write this article in the comment section of my article about the annual Kardashian Khristmas party. I’ll be sure to thank you in my acceptance speech when I inevitably win a Pulitzer for my work.