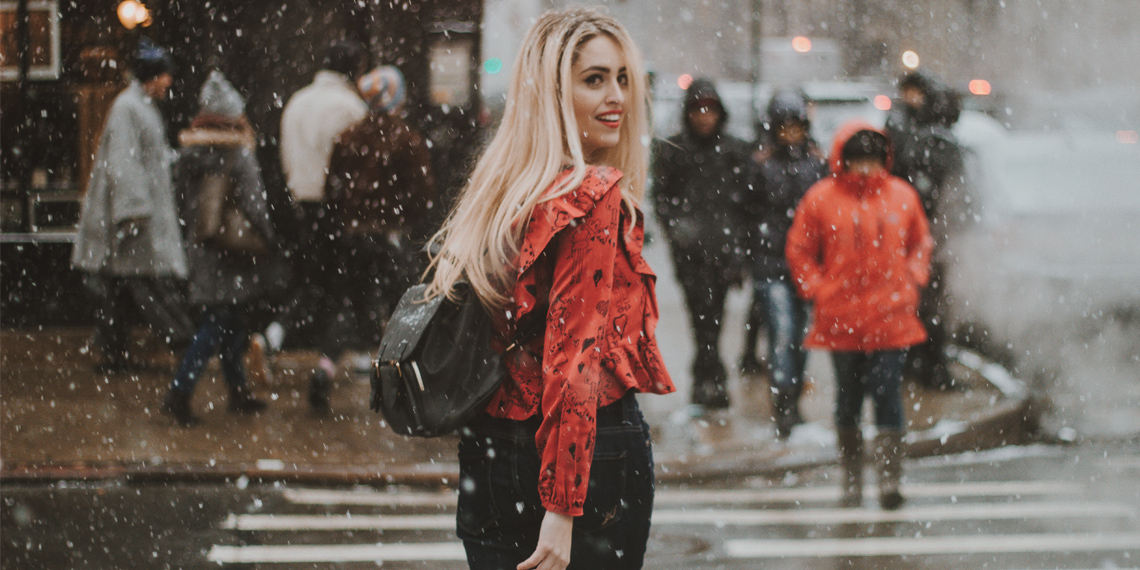 In case you haven’t noticed, the world is like, probably basically ending and the climate is all over the place. One day, it’s 60 and sunny, and the next, there’s a storm that meteorologists have named something ridiculous, like a Polar Shit Nova Bomb. The only entity that currently changes its mind more than the weather is Arie Luyendyk Jr. The only difference is that when Arie decides to create a shitstorm, it results in a few sponsored content partnerships and increased television ratings, and when Mother Nature does it, it ruins all of our clothes. It’s about time you stock up on some transitional clothing for when the weather is confusing af, and here’s the shit you should buy.

The worst part about this shitty end-of-winter, beginning-of-spring weather is that even when it’s not actually raining, the ground is kind of a war zone for your shoes. Obviously, you can’t wear your fav suede booties, but unless there is literal water actively falling from the sky, you really can’t be wearing your rain boots, either. It’s probably solid to invest in a pair of sneakers or casual shoes that can survive rogue puddles. When I originally saw these sneakers in Nordstrom, I had no idea that they were waterproof, which is exactly what you want when it comes to weather wear.

If You Absolutely Have to Wear Rain Boots, Don’t Be All Like, Uncool

It’s like, kind of impossible to wear rain boots without looking like a mommy blogger who forces her kids to wear the same clothes as her. Luckily, there are tons of Jeffrey Campbell rain boots that don’t suck. Just like, wear cute socks with them. Please.

Tie Shit Around Your Waist

I totally understand if you’re hesitant to tie clothes around your waist. It’s a very “eighth grader who just started her period on a class trip” move. However, everyone with half a brain knows that wearing layers is basically your only option when the weather is bipolar, and carrying an extra sweatshirt around when you’re too warm to wear it is fucking exhausting. Thankfully, wearing a flannel around your waist with a denim or leather jacket and a basic base layer is an actually cute, extremely versatile look. Chambray or denim shirts are perfect for this, since they’re transitional clothing that basically goes with everything.

Listen, I know it can be tempting to wear that velvet top a few more times before it looks really out of season (who knows how much longer crushed velvet is going to be a thing, anyway), but when the weather is all over the place, you’re better off wearing two breathable layers than one really thick one. Quantity over quality is probably already your stance on wine, so why not try adopting it into other areas of your life, like transitional clothing? Think open cardigans and tank tops instead of thick sweaters. Cardigans are ideal for throwing over clothes that prob shouldn’t be worn until it’s warmer out, but that you’re going to wear anyway because you don’t give a shit.

Get Wintery Shit in Springy Colors and Materials

You’ll probably still want to wear a scarf some days in the spring, but a chunky blanket scarf that weighs as much as an Olsen Twin will make you sweat the second there’s a slight change in weather. Lightweight springy-looking scarves are usually floral and ugly, so you’re going to probably want to invest in a scarf (or some kind of cold weather accessory) that’s made out of a breathable material. Lululemon’s Vinyasa scarves are the perfect transitional clothing accessory, because they’re very versatile and will keep you warm without making you gross and sweaty.