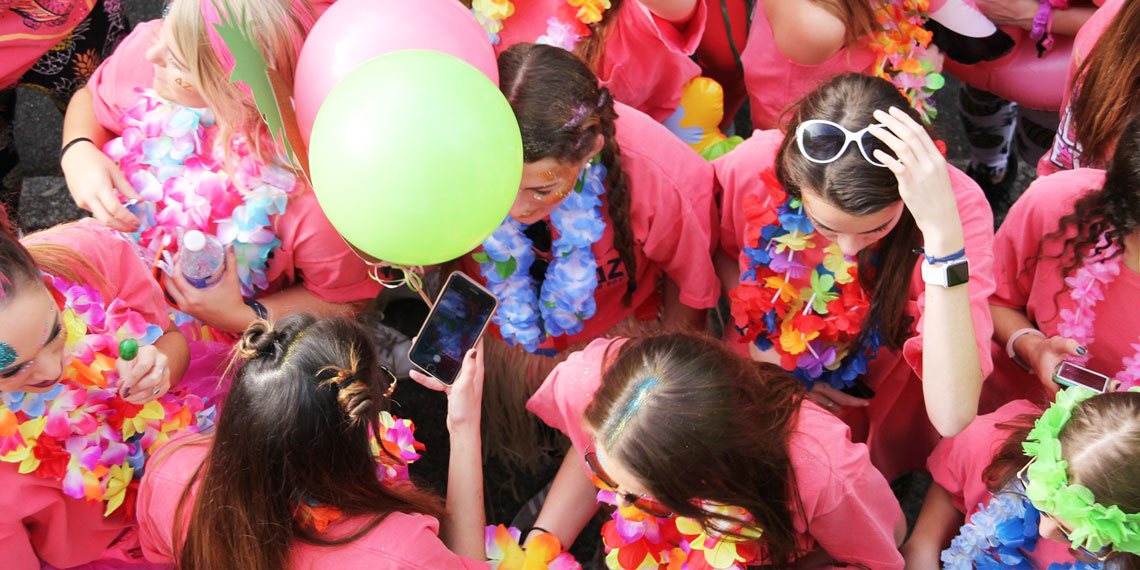 Ahh, recruitment szn. Where do I begin? For starters, recruitment is stressful as F*CK. For both sisters in sororities and PNMs (or “potential new members” for those of you who  go to a school without Greek life), recruitment just might be the most draining experience of your entire college experience (Aside from pledging, finals, the week before graduation…okay, it’s all exhausting).

Sorority girls act like they survived a war when recruitment is over and TBH, it’s not that far from the truth! Even though recruitment is one of the most stressful parts of college (aside from the sh*t show that is trying to go to a frat formal weekend), hopefully with these tips you can slay the process and get into the sorority of your dreams. That sounds cheesy, but this sh*t is going to be important for the next four years.

Unless you go to a school in the south where you have to put together multiple outfits that speak to who you are as a person (head to toe Lilly Pulitzer), many schools make things easy by requiring all PNMs to wear the same T-shirt with jeans. This “uniform” takes some of the pressure off of waking up at 6am to do your makeup and hair to be ready to schmooze by 7:30, and provides an even playing field for all PNMs. The only downside is that your outfit choice doesn’t speak to your individuality. But honestly, just feel lucky that for one week, you don’t have to stress about what to wear.

My best recruitment fashion tip is to wear a statement necklace or bold pair of shoes to stand out. I wore an opal choker and rose gold slip-on sneakers when I went through recruitment, and they were great conversation starters. Although your recruitment outfit may not be the best portrayal of your personality, tasteful and interesting accessories are a great way to distinguish yourself from the crowd and make yourself feel like a bad bitch.

Unfortunately, recruitment is one of the most germ-infested periods of college, aside from any time you step foot into a frat house. To make things worse, many schools have spring recruitment, which is conveniently during the height of flu season.

To avoid getting sick, you need to looooove hand sanitizer as much as you you’ll love your “perfect big.”  Use it after every single round of recruitment, and wash your hands often. If you do feel like you’re coming down with something, do yourself a favor and slam some tea, water, and OJ, and make sure you’re eating, because your health is the last thing you want to be worried about during recruitment. Nobody wants to hear you scream-sneezing in between rounds.

They say the five Bs to avoid are: booze, Barack, Bible, bills, and boys—or, in other words, alcohol, politics, religion, money, and garbage. Oh oops, I mean men. While this is a pretty good rule to follow, as you may notice, all of these topics are things a lot of people bond over. Especially that first one. But, the purpose of this rule is to make sure PNMs join sororities for the right reasons, not because one sorority mixes with the hottest frat or considers themselves rich.

That being said, these topics may very well come up anyway. My advice would be to go with the direction the sister you’re talking to is going. If Stacy from Alpha Oopsilon confides in you about exclusively going to Sigma Apple Pie, this is your chance to bond on the DL over something you’re not supposed to be discussing…but make sure the SBICs (sorority bitches in charge) don’t hear you. Fraternities and boys in general are probably the only exception to the five Bs to avoid. It’s in your best interest to avoid talking politics, religion, and finances, unless the person in front of you explicitly brings those topics up. Just pull out your best small talk, ask questions, and for f*ck’s sake at least pretend like you give a sh*t about whatever it is they’re saying.

Truth be told, the sister you’re fake laughing with probably doesn’t feel like talking about philanthropy to begin with, so just smile, nod, and listen for opportunities to bond over literally anything else. The girls you meet in the rounds from each sorority are pretty much trained in “recruitment etiquette,” so it should be fairly easy to follow their lead.

As bullsh*t as it sounds (especially if you’re basing your recruitment expectations based off of movies like Sydney White and The House Bunny), the best way to have a successful sorority recruitment is to  be yourself and be confident. People always say “trust the process” of recruitment, but that only works if you’re not being fake. As with all things, sometimes sh*t happens and doesn’t go the way you initially hoped. You may not get a bid from your number one sorority and on top of that have blisters from practically spending a week straight in heels, but if you’re being authentic, the process should work out and you will end up in the right place. It sounds corny, but it’s true!!

Don’t compare yourself to other PNMs, and do be steadfast in the belief that you’re a badass bitch. Don’t get caught up in the bullshit that is the “tier system.” Choose the sorority where you feel the most at home, because your experience will be 10x better than in a sorority where you’re always being fake af.

All in all, sorority recruitment can actually be the longest five days of your life, but just think about all the kweens who went through recruitment before you. Stay calm, stay healthy, and walk into the experience with confidence.

Make the most of the 30 minutes you have to leave a lasting impression, and don’t be nervous, because girls can smell insecurity from a mile away. If you find yourself feeling overwhelmed during the process, just remember the girls you’re trying to impress are literally the same ones who roll up to your 8am hungover and in sweats. And if you follow our tips, you could be too.