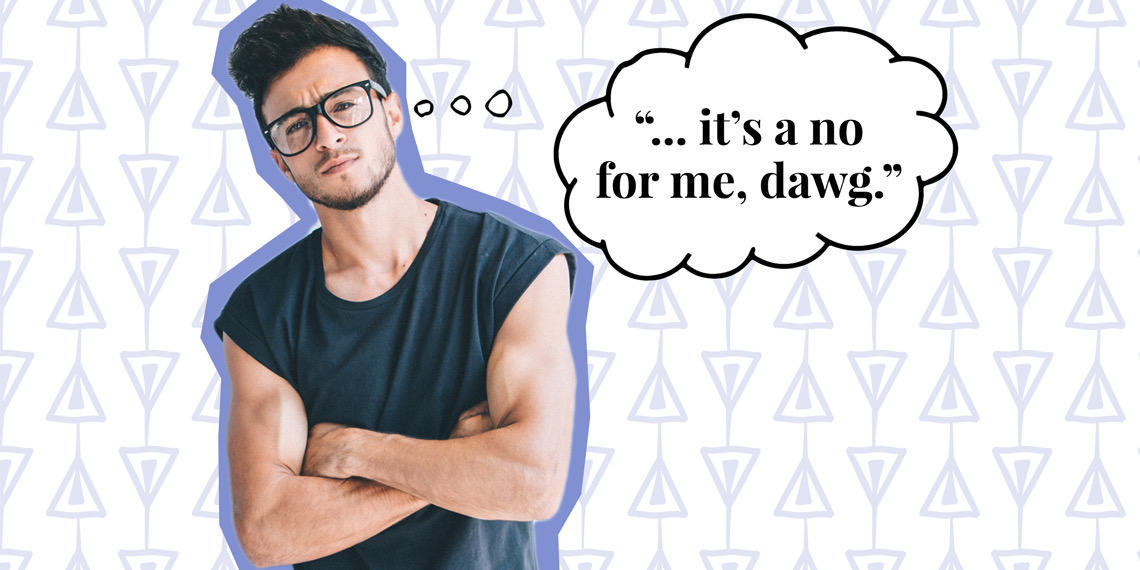 The annoying thing about dating advice, generally speaking, is that it tends to be 100% based on other peoples’ opinions. And if you’ve ever engaged in polite conversation, you’ll know that most peoples’ opinions fucking suck. I’ve read countless times that showing up late and mentioning horoscopes is a guaranteed dealbreaker, but my Scorpio boyfriend (tragic, I know) was kind enough to overlook all that, and we’ve been thriving ever since. So, I’m not here to give advice on dating specifically, an activity at which everyone unabashedly sucks. Instead, I’m here to make sure you actually make it to the point where you can decide whether or not you want a second date, rather than taking yourself out of the running with a too-soon friend request or some other amateur bullshit. Here are three ways you’re scaring guys off before you get a chance to reject them yourself. Take notes.

Social media is tricky. You need a distraction from the all-consuming task of not triple-texting, so you decide to post an Instagram story that happens to highlight your breasts and/or totally raging social life. And which you then go on to update every 30 minutes. Totally harmless right? Wrong. If triple-texting is unattractive because it looks like you’re too into him, non-stop social media is unattractive because it looks like you’re way too into your phone/yourself. (Which like, you are, but let him find that out on his own.)

Social media stories typically fall into two acceptable categories. If they’re actually interesting/entertaining (what the kids refer to as “quality content”), post away. Keep in mind that this typically requires you having an interesting job or life, such as interacting with celebrities. Just my two cents. If your stories fall more into the “day in the life but my hair looks good” category, you’re going to really want to limit it to the highlights. ONE selfie er day. ONE meal pic every three days, and the sunlight better be hitting your avocado toast JUST right. You get the idea.

Guys watching a story you updated every two minutes aren’t admiring your fun, cool life. They’re picturing you standing in the middle of that scene with your eyeballs glued to your phone. More importantly, they’re picturing dating you as an unpaid photographer gig with a side of watching you scroll through filters. (Again, this is accurate, but it’s also a reality that men need to be phased into slowly. If they’re aware of what’s happening before it’s too late to stop it, you’re doing it wrong.)

You’re not Kim K. You can’t get away with this.

Planning Out Every Last Detail

On average, it takes me and my boyfriend maybe 60 texts to nail down a dinner date. I reject the first 15 restaurant suggestions, he suggests between seven and 12 different meeting points, I get preemptively snarky about his outfit, and the fun rolls on. Fine and good when you’ve tricked someone into you’re in a committed relationship. Early on, though, anything above a single-digit number of texts to make a plan is going to be off-putting. This includes everything from the first “when should we get together” text to when you’re actually, physically speaking. Which means you should leave room for one “I’m here” text when you arrive, and should absolutely not be texting “do you want me to get a table or meet at the bar? LMK!” once you do arrive.

Texting back and forth over every detail makes you seem like you can’t make a decision without outside input, and runs the risk of exhausting him so much that the idea of meeting you in person no longer seems fun. This includes texts moving around the meet-up time, suggesting more than two locations (or including more than a five-word description of either one), or in any way reiterating the plans you’ve literally just made. (The boy can both scroll up and read, right? If not, get higher standards.) If you’re taking the initiative to make the plan, actually make the plan. And if he’s taking charge, either agree to something quickly or decide his suggestions all suck and just cancel altogether. Anything else will just breed irritation when your name pops up on their phone.

Your crush if you don’t ease TF up:

Congratulations, you are a grown-ass woman. Everything in your life falls perfectly into place, seemingly without effort. You don’t need this man’s validation, and you won’t be crushed if this date doesn’t go well. You’re down for anything that comes up, but you’re just as down to walk away. You are the perfect embodiment of everything men are supposed to want women to be. Well—SURPRISE, BITCH! This is 2018, and perfect is no longer good enough. While I maintain that the above is a great attitude to hold internally, there are two glaring issues. One, this is true for exactly no one; you likely try very hard for everything you’ve achieved, and care at least a little, and hiding that is dumb. Two, it leaves very little room for you to make a meaningful connection. If someone’s going to get to know you, you have to show some vulnerability.

That means you can’t just be “fine with whatever” when it comes to spending the night, going out again, or picking your first vacation spot. You have to be honest about what you want, even if that means maybe not getting it. While being the Cool Girl might keep a guy interested in chasing you for a decently long time, maintaining the Cool Girl virtually guarantees that he’ll never be actually interested in dating you. In fact, he has no idea who the fuck you are beyond a girl who answers his texts less quickly than his other matches, and is therefore intriguing. Somewhere, some bitch who probably has an adorable Southern accent will outplay you by answering his texts just as slowly but then confessing that she’s getting attached on date three with a giggle that makes him feel like a Big Special Man. It’s all about balance.

This is where being a Cool Girl gets you. Covered in blood and hugging Ben “I specialize in on- and off-screen adultery” Affleck. Don’t be the Cool Girl, ladies!

Once you’re on the actual date, everyone has a million highly specific preferences for what person they want you to be. (You do too, don’t lie.) But with these tips, you’ll hopefully at least make it on the date before you fuck it up. Good luck out there!