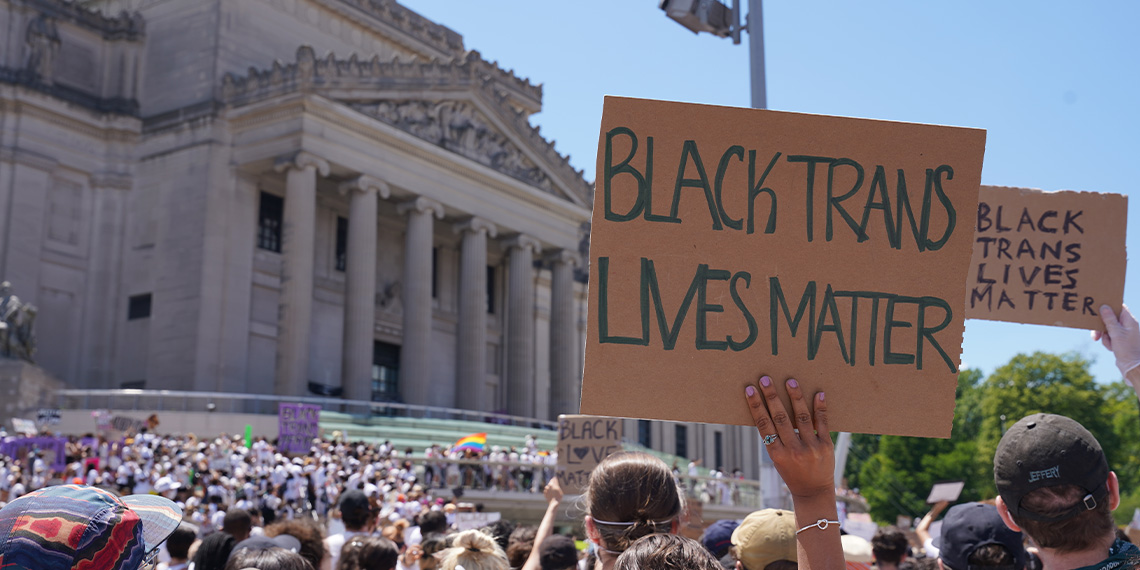 This Year, We Don’t Need A Parade To Celebrate Pride

This weekend would have been the NYC Pride Parade. I had been making plans for this year since last year’s parade. I had my outfit picked out, my Instagram caption ready, and my game plan set. I was selfishly crushed when the Pride parade was canceled because of coronavirus, but I knew that it was for the best. I’ve been using my time sheltering in place to consume a gluttonous amount of social media, which would have been a complete waste of time a few months ago, but thanks to the people I follow, I’ve been able to educate myself on my own privileges and start recognizing systemic issues, as well as innate biases that I need to undo. However, with all of the civil unrest during a month where I initially thought I’d be celebrating, I felt uncomfortable. How was I supposed to balance being supportive of the serious and significant Black Lives Matter movement while still honoring the tradition of Pride? Then, I saw this protest sign posted to the story of my friend Dom Overman that answered all of my questions, and changed my perspective on this year’s Pride.

If we go back to the original reason we celebrate Pride, it is to honor the Stonewall Riots, which were protests against police brutality toward the LGBTQ+ community. On June 28, 1969, police raided The Stonewall Inn, a now world-renowned bar in Greenwich Village in NYC, with the full intention of arresting and beating the sh*t out of everyone in the bar for being gay. But after decades of mistreatment, on this particular night, the patrons, led by trans women of color Marsha P. Johnson and Sylvia Rivera, fought back. In the following days, more and more people came to fight against this mistreatment. About 500 people took part in the protest on the first night, and by the second night, there were over 1,000. The official Stonewall Riots lasted until July 3rd, but that was just the beginning. Stonewall galvanized the burgeoning gay rights movement, and LGBTQ+ rights groups started popping up all over the country, as queer people and their allies banded together to fight the systemic injustices toward queer people.

A year later, a parade was held to honor the Stonewall Riots, which began a tradition that has lasted ever since. While the fight for equal rights continues to this day, the parade is a chance to celebrate this beautiful community: for 50 years, queer people have looked forward to wearing glitter, attending the parade, and being surrounded by people who truly understand each other. This year, the cancelation of the parade has allowed us to shift our focus to the protests supporting Black Lives Matter, a movement fighting systemic racism and police brutality. Sound familiar? It’s time to step up and support a group of marginalized people during this crucial period of developing change in social justice.

It is incredibly important to remember that the Stonewall Riots were led by Black trans women, who are among the most vulnerable groups in our society. The average lifespan of a Black trans woman is 35. I am neither Black nor trans, but I have benefited personally from the actions of Black trans women. They are the reason I get to hold hands with my girlfriend in public, and they are the reason I can be as authentic to myself as I am without fear (relatively speaking, depending on what part of the country I’m in).

But despite the bravery of Black trans women in fighting for the LGBTQ community as a whole, this group is still the most vulnerable. Trans women face violent hate crimes, sexual assault, risk of HIV, and homelessness at a higher rate. This year, at least 16 transgender or gender noncomforming people have been murdered, including Dominique “Rem’Mie” Fells and Riah Milton, whose deaths emphasized just how at-risk Black trans women are. In the middle of Pride month, on the anniversary of the mass shooting at Pulse nightclub in Orlando, the Trump administration stripped the trans community of their protections against discrimination in healthcare based on gender identity. This is an intentional and informed attack on the trans community. Instead of having a parade to honor how far we’ve come, this year we can pay Black trans women back literally and metaphorically for being the reason we made it here. We can show up for protests (wearing a mask!!), donate to charities or personal GoFundMes, and pressure our lawmakers to either uphold the (somehow controversial) concept of human rights, or risk getting their asses voted out of office.

With all of this free space, we have the opportunity to not only lend our voices to important causes, but also to find new ways to celebrate our queerness. We can take this time to deep dive into queer history and the reason for the rainbow season. We can take notes from The Dyke March, an annual NYC protest that is turning its attention to signal-boosting the Black Lives Matter movement. We can have small get-togethers with our queer crew. We can attend virtual queer events featuring DJs that we were looking forward to seeing at the afterparties, or highlighting queer artists speaking about the current revolution, and how we can continue fighting. We can clean the slate and recreate Pride to honor ourselves and those who fought for it to happen.

The Pride Parade is truly a powerful event where you can surround yourself with love and security that you can’t find anywhere else. But there are much more serious matters at hand than having a parade. There is still a global pandemic, despite what some media sources are telling us, and there is a civil rights movement which has worldwide momentum that needs to be continued. The LGBTQ+ community knows firsthand how important it is to have allies standing strong alongside us, and now, we can be those allies. Centering Pride back on its original intention of human rights and social change will allow us to spread that love and security far beyond just a parade.