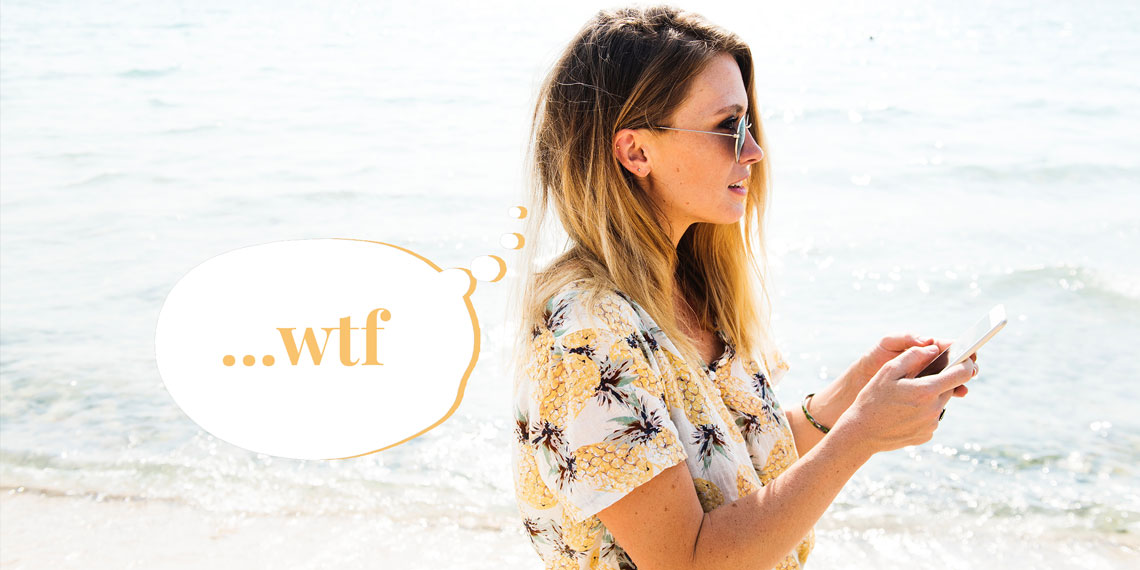 Last week, Twitter user, @SingleintheSou1 tweeted Betches with a screenshot of her text conversation. The texts were with a guy she’d matched with on Hinge a few days before, whom she had yet to meet. After bonding over a shared interest in football (can’t relate), they swapped numbers. Then he decided to casually remind her what a hot commodity he is by mentioning he had a date. @SingleintheSou1 was not pleased. This led to a debate of sorts in our mentions. Some people said the guy did nothing wrong. Some people (me) called him trash (mentally, not publicly on Twitter). So we decided to reach out to the original poster to get her version of the story.

It all started with this offending text:

He thinks he can just slide that in there and I won’t notice? We just matched a week ago and have a date sent for this weekend…. #WellThatsCancelled #cantmakethisup @betchesluvthis @seriouslybumble pic.twitter.com/gBDLaMFZK8

LOL. Okay, my first reaction here was twofold. (Threefold, if you count the initial “green text” cringe.) First, good on @SingleintheSou1 for calling him out and not just being like “haha that’s fun.” (Definitely what I would’ve done, and I get wrecked by f*ckboys like it’s my job. Just saying.) Second, how did this guy respond to her calling him out? Typically, there are two camps of douche here. Type A is your typical bro who will go with “u jealous? ;)” and then send a picture of his penis. Type B is the guy who will spend your entire relationship trying to convince you his emotions are more pure and urgent than yours, and who will act genuinely wounded when you don’t want to discuss his date with him. Luckily, I reached out to @SingleintheSou1 and we have our answer.

Yep, type B douche if I’ve ever seen one, which definitely sucks because these are the guys who are much harder to get rid of. They tend to take “I’m not going on a date with you,” as a jumping off point for debate, which it’s really not. But hey, why tell you when I can show you. Screenshots continue below.

LMAOOOO. This is like, every single tactic guys try when they f*ck up with a girl, but all in one text convo. What a gift. What a goldmine. First, he tries to turn the fact that he mentioned dating other women into an abstract discussion of online dating. Doesn’t he know that’s what Twitter threads are for? Next, we’ve reached the “clearly begging” phase of trying to reset with “how was your day.” Finally, we’ve got the “all right I’m going to CONFRONT her on this,” (at 8:24am no less—anyone else think he drafted this the night before?).

The confrontation is classic bullsh*t. He tries to make her feel like she missed out on something he already said he wasn’t interested in (“I was going to cut it off with them”—and LOVE that there’s a “them” now). He weirdly tries to suggest this her fault (“you might ghost me at any time”). And finally, he turns it around on her with “were you not talking to other guys?” Never mind that that’s in no way the point—she just didn’t exactly want to chat with him about other women.

Anyway, my opinion is that this guy was a joke from the moment he mentioned his other date. But not everyone on Twitter shared that view. @daniellenpeart had the following to say:

If you’re not in a committed relationship what’s wrong with dating around?? I’m confused. It’s a little weird that he slid it in there, sure.. but at least he was honest.

Yeah, I’m still going to have to side with @SingleintheSou1 on this one. It’s true that guys should be honest if they’re seeing other people—if you ask them. Sorry, but I guess I’m just not enough of a ~modern woman~ to want to discuss prospective matches with someone I thought I’d be going on a date with. I think a lot of the problems with online dating come from the fact that everything is so transparent already. Everyone knows that you can go home and swipe through hundreds of matches at any time—and nothing’s stopping you from continuing to do that even if you meet someone you like.

But dating has always required building the illusion that you’d rather spend more time with that person than anyone else, even when it’s really, really not true. You both have to be there in good faith, making an effort to make a connection. And that’s hard to do when they insist on announcing it every time they go on a date with someone else who they would like more. Just my two cents. @SingleintheSou1, best of luck in your future pursuits—and thank you for including us on this journey.

Got a sh*tty dating story? Email us at [email protected] with subject line “Dating Horror Story”.