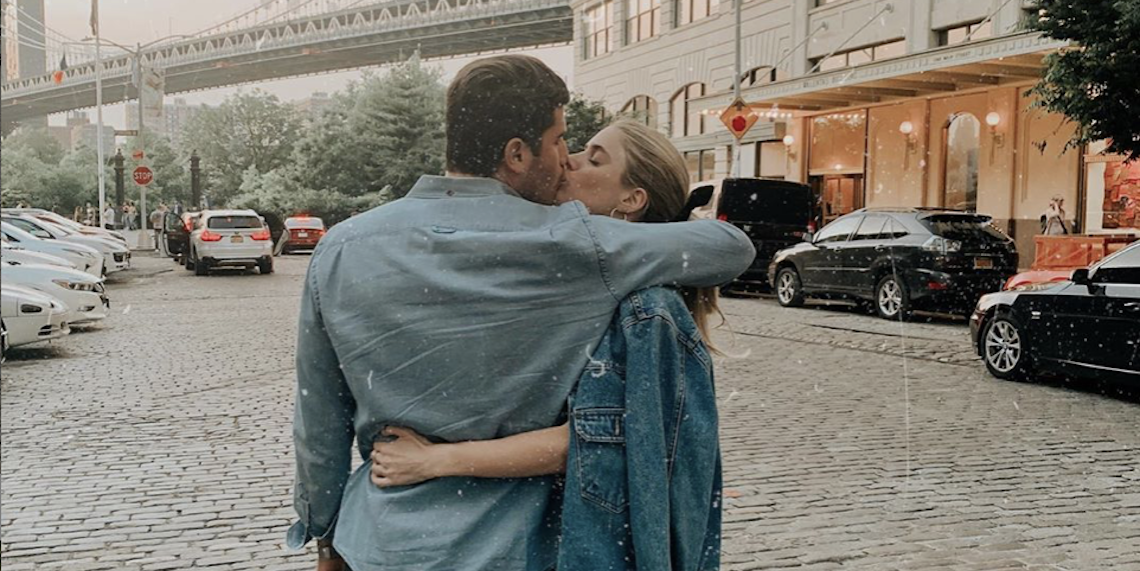 UPDATED: This Influencer Is Getting Engaged On Instagram In Real Time

In the era of Instagram, people have gotten more and more extra about their wedding events, because everything has to be a competition. Most people flood your feed for months with a proposal, a bachelorette party, a bridal shower, and an entire week of wedding festivities—but what if you did it all at once? That’s what is probably happening right now with influencer (and Goop employee) Marissa Casey Fuchs, who has one hell of an Instagram story right now.

On Tuesday morning, Marissa’s friends played her a prerecorded video from her boyfriend Gabe, talking about how they’ve always known they don’t want a traditional engagement or wedding, that he posted on his own Instagram story. The video is sweet (maybe a little mushy for my icy cold heart, but whatever), and Marissa was losing her sh*t the whole time. From there, her friends took her on a scavenger hunt that has so far lasted over 24 hours.

The first stop on the mystery tour was Flywheel, where Marissa seemed wayyy too excited to take a cycling class. If I thought I was about to get engaged/married, the last thing I would want to do is sweat profusely for an hour, but to each their own. From there, they headed to the AIRE Ancient Baths for massages, and then back to her apartment, where she got her hair and makeup done by Glamsquad and was told to pack a bag.

This combination of frantic running + the bloodcurdling scream at Flywheel are all I’ve thought about in the last day.

The original plan was for Marissa & Co. to take a helicopter to the Hamptons (lol casual), but there was bad weather, so instead they had to take an Uber to Gurney’s, in Montauk. Really slumming it! In case you’re wondering, an Uber from Manhattan to Montauk is approximately $300, so no, it’s not a viable transportation option for most people. While in the car, Marissa clarified that the two women with her on this whole journey are actually her long-time friends, not interns, as some people were guessing.

They got to Gurney’s on Tuesday evening, and Marissa was still totally clueless about what was going on. During this entire fiasco, Gabe has been dropping hints via his Instagram story, but has still yet to appear. People have even started posting with the hashtag #WhereIsGabe, and we all really need to know. Honestly, if I was Marissa, I would be pretty pissed if my man was nowhere to be found during all of this, but clearly she’s down to go with the flow.

This whole journey is beyond extra, and it’s definitely not over. As of Wednesday morning, Marissa was checking out of Gurney’s, and it looks like she’s heading to Hewlett High School on Long Island, where she and Gabe first met. She only found two of the three jewels while she was in the Hamptons, and it looks like the third one is in Hewlett. I have a feeling Gabe might finally make an appearance there too, perhaps with an engagement ring.

Meanwhile, people have been obsessing over following along with her scavenger hunt, and she’s gained over 25,000 followers on Instagram in the last day. I guess all I need to do to get Instagram famous is find a man to plan a viral engagement/wedding scavenger hunt for me—sounds easy enough!

6/19 UPDATE: So the high school thing was a total fake-out, and instead Marissa’s car took her to JFK. She’s currently on a flight to Miami, but she doesn’t know who will meet her there. So far, Gabe still hasn’t made an appearance, and I would be getting pretty impatient if I was Marissa.

6/20 UPDATE: Marissa woke up in Miami after a night of celebrating with her University of Florida friends at Prime 112. Gabe decided to f*ck with his future fiancée’s fragile state even more by posting a video on his IG story for her to open the door of the dining room for his arrival. Spoiler alert: he never arrived and she was not thrilled, but semi-expected he wouldn’t be there. She spent Thursday morning frantically shopping at Zara, The Webster, and Neiman Marcus because she “has no more clothes left” before she jet sets off to Paris (a problem I often have). Not to take the words out of everyone who is watching her stories’ mouth but, WHERE THE F*CK IS GABE??? I’m low-key pissed for her that she’s about to fly cross-country solo. Hopefully someone surprises her and at least escorts her to Paris. She still hasn’t found a good dress to wear for whatever this stunt will culminate in, and her flight is tonight. Drama!!

6/21 UPDATE: Marissa finally settles on a dress from The Webster. After her shopping stunt she just collapses onto the hotel lobby floor because she is super overwhelmed from “the press and so much going on”. Passerby’s don’t seem to think it’s weird that she is sitting on the floor being video taped but that is neither here nor there. We then find Marissa on the beach with her Kim K crying face on because she called her mom and she heard the “European beeping noise” in the background…Ok. To me sirens are sirens but alas the waterworks continue. Marissa takes control of her phone to let her audience know that she is “really, really, eternally grateful for everything Gabe and her friends have done”. I’m glad she reminded us because the shopping and ripping through gifts had us worried for a sec. She confesses that her dream was to run away to the Maldives (casual) with Gabe and just get married. Finally, Marissa is headed to Paris where she seems to be traveling SOLO, which to me is pretty emotionally taxing and just slightly f*cked up. She gets to her hotel room expecting to see her mom, her brothers, or Gabe’s mom in the room but no one is there except for a man name Charles who has been sent to do her hair and makeup. She has a brief moment where she thinks she is going to leave her phone in the hotel room so she can be “present” in the moment. But that is a short lived feat since she realizes she has to go on a 30-40 minute car ride so she def needs her phone, which is good for us so we can continue to update all y’all. Will this end in a proposal? A marriage? Will she find Gabe? Stay tuned…

We know The Atlantic published a piece exposing the fact that a deck about Marissa’s proposal was passed around to brands months before the actual proposal but was Marissa actually involved? Based on her reactions we are going to go with a ‘NO’. I mean, who wants to cry like that on camera? Certainly not us. Marissa works at goop, so it’s not outlandish to think her co-workers created this to help her future fiancé. Regardless, we are still following along for the ride, as you can see below:

Earlier this week, @fashionambitionist was sent on a viral proposal journey starting in NY and ending in Paris with a pit spot in Miami by her longtime boyfriend @gabriel.grossman. Since then, a deck has been leaked about the entire process and people are accusing Marissa of being in on it. While speculation has been abundant, no one knows the truth and she claims she had no idea. I mean, look at those tears!!!! Who could fake that? (And why would you even want to???) Alas, we are here for the journey so head to our story and link in bio to keep up to date on what has got to be the most over the top proposal we’ve ever seen https://betches.co/2IwAjon #RielLove

But I digress because Gabe just went live to cover the entire proposal where Marissa can barely stand up on her own. Faking? Does not appear likely but who really knows? Gabe also just shot up a casual 3,000 Instagram followers from this stunt…just saying. Once the couple (really just Marissa) is finally able to collect herself, Gabe turns her around to show that their families are waiting for them. She lets out a screech heard around the world and unites with their families. On the way to meet them, Gabe drops a line about a wedding taking place later on today.

It is now 11:58am NY time and we’re watching the wedding festivities unfold thanks to Marissa’s two brother’s Instagram stories. I don’t know where Marissa pulled out this long sleeve cropped top + bridal skirt from but we are here for it.

Make sure to follow along with our streamlined coverage on @betchesbrides. Marissa’s story is a lot to watch right now, but we’re posting all the most important updates, along with some of our own thoughts from Betches HQ.