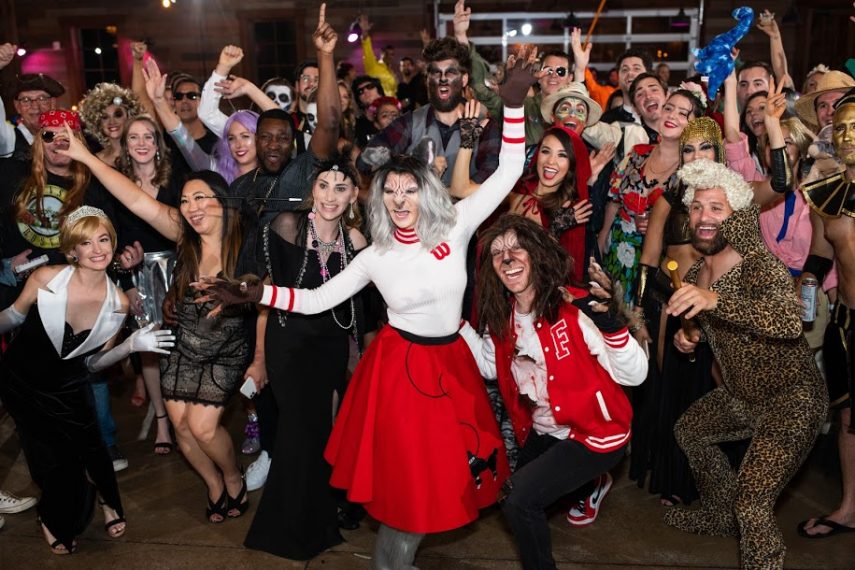 This Halloween Wedding Is Straight Out Of Your Nightmares

In our society, more often than not, weddings tend to look pretty similar. While people have different preferences about flowers, colors, dress silhouette, etc., most weddings still consist of your standard white dress and a big, beautiful cake. But not everyone has the same dream for their wedding, and for one bride, her dream wedding was more of a nightmare. To celebrate Halloween, Betches Brides style, we spoke to Dre Fox, a bride who got married last weekend in a true Halloween wedding extravaganza.

“As long as I can remember, I have been called the Queen of Halloween—always taking it WAY too seriously, spending months crafting and handmaking my outfits.” When Dre met her now-husband Josh, the two instantly bonded over their Halloween plans the night before, and last year they celebrated together in elaborate Beetlejuice and Lydia costumes.

So when it came time to create a concept for their October 26th wedding, a Halloween wedding was a no-brainer. “When we got engaged, I knew I didn’t, no, COULDN’T do the normal thing. I’ve always been an eccentric person and this needed to be no different.” This is not your traditional wedding, so take a deep breath, and let’s dive in.

The wedding was designed, planned, and coordinated by Ashley Nicole Affair, who went above and beyond to give Dre and Josh the spooky Hallowedding of their dreams. The ceremony itself was kept mostly traditional, with Dre, Josh, the wedding party, and the bride and groom’s parents dressing in conventional wedding attire. Dre walked down the aisle in a stunning Justin Alexander ostrich wedding gown, looking every bit the traditional fairy tale princess, but that’s where the “traditional” part ended. The guests attended in costume, so Dre and Josh got married surrounded by loving friends and family dressed as aliens, magicians, pirates and Freddie Mercury. As one does.

Dress designer Justin Warshaw of Justin Alexander was featured on the most recent episode of the Betches Brides podcast, where he talked all about what it was like attending such an unconventional event. Here’s the episode, where you can hear about Dre’s Halloween wedding, as well as some of the most-asked questions about wedding dresses:

As the day progressed and the celebration moved from the ceremony to the reception, like Michael Jackson in the “Thriller” music video, Dre and Josh transformed into beasts of the night with the help of CGI makeup done by Jen Hearts Art. The result was truly shocking, and not just because the couple looks utterly unrecognizable. Most people getting married spend inordinate amounts of money trying to look like the best possible versions of themselves for their big day. So you can imagine, asking a makeup artist to make you look hairier and uglier on one of the most important days of your life is not just unorthodox, it’s downright subversive. Honestly? I’m here for it.

Obviously, looking like this at your wedding is not what most couples would want, but I really admire their commitment to doing exactly what they want. And the commitment to the theme did not end with the reception attire. As a former pastry chef, Dre made all of the desserts for the wedding, including the bloody-looking wedding cake. Was it a red velvet cake? I need to know if it was a red velvet cake.

Josh’s bomber jacket was adorned with the phrase “JUST SCARIED” on the back, seating cards were made to look like toe tags, guests’ napkins were held together by vampire teeth, and appetizers were black and purple, in keeping with the spooky spirit of the evening. For entertainment, guests were treated to a caricature artist and a tarot card reader. I mean, this is dedication, and I have no choice but to be impressed.

While not every guest was on board with the couple’s vision for the wedding, Dre wouldn’t have changed a thing: “A wedding should be a representation of you. Not what or who everyone else wants you to be. It takes a leap of faith to follow your heart in the face of criticism, but the people that were there? Well, they understand what love without judgment and true acceptance looks like.” I’d say that warms my cold, dead, heart, but then I wouldn’t be staying true to the spirit of this truly remarkable wedding.