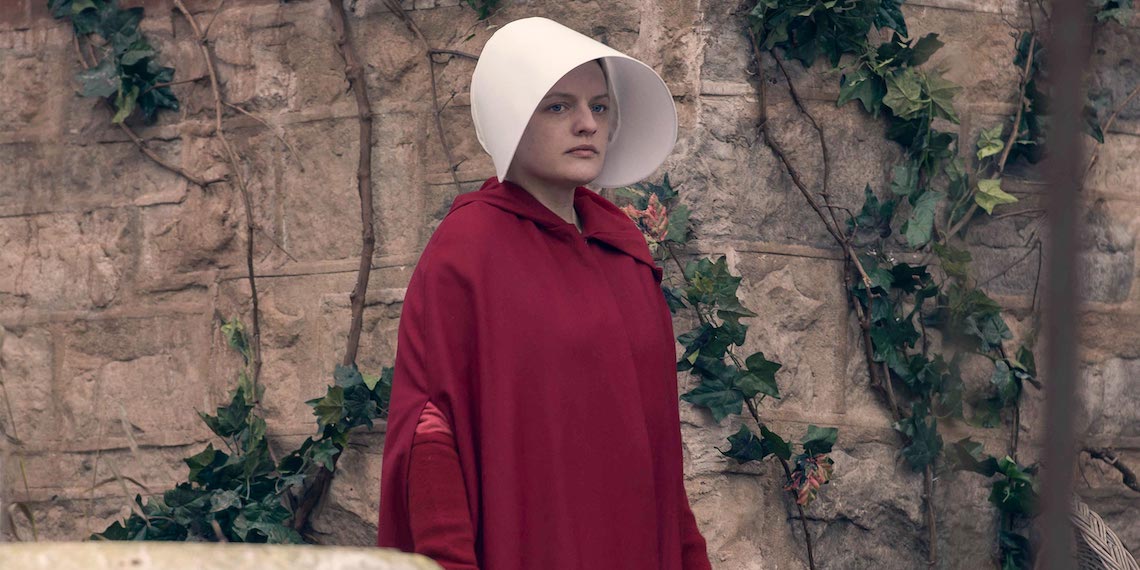 Remember back in June when Kylie Jenner hosted a Handmaid’s Tale themed birthday party for her good friend Stassie Karanikolaou and everyone was like, “wow what a bizarre and off-base interpretation of a show about female oppression?” Well, one Canadian couple saw that backlash and said, “hold our champagne.” A photo of newlyweds Kendra and Torsten’s (of course their names are Kendra and Torsten) Handmaid’s Tale-themed wedding is going viral, and not really for anything good. I have so many questions. Namely, have these two ever seen The Handmaid’s Tale?

Praise be! Kendra & Torsten are married! 🙏🏻 If there’s any @handmaidsonhulu fans out there, you’ll know most of it is filmed in Cambridge! So, as fans of the show, it only seemed fitting for there to be some Handmaids in K&T’s wedding photos along the ‘hanging wall’ in Mill Race Park! 🤣🙏🏻👌🏼📸 . . . #handmaidstale #handmaid #handmaidsonhulu #handmaidstaleseason3 #cambridgemill #wedding #weddingphotography #weddingphotographer #couplegoals #weddingwire #weddingwirecanada #theknot #weddingbells #funwedding #vandaelecouple #praisebe #couplegoals #picoftheday #weddingday

(Screenshot below because I have a feeling this won’t be up on Instagram for much longer.)

The problems with this wedding theme should be immediately obvious to anyone who has even heard of the show, but let’s break it down, shall we? First up, the setting of this photo is literally the “hanging wall” where women are murdere for infractions such as “being gay” and “gossiping at the grocery store.” Not really the fairytale ideal for kicking off your life as a married couple. Also it’s kind of a boring backdrop without all the blood and dead bodies. Just sayin’, if you’re gonna go “hanging wall” for your wedding photos, why not go all the way?

Second of all, the institution of marriage in Handmaid’s Tale is totally horrific. For those who don’t watch the show, men in Gilead are assigned a wife (presumably the bride here) and a handmaid (who I guess are the bridesmaids?). Every month there is a “ceremony” in which the wife holds down the handmaid while the husband has sex with her (also known as “rape”) in hopes of getting her pregnant. When the handmaid does get pregnant, the married couple then steals her baby and sends her away so she can never see the child again. This is the relationship they’re trying to evoke between the bride, groom, and bridesmaids in this picture. How romantic.

Now, I’m not saying fans can’t have any fun with Handmaid’s Tale. The show deals with some pretty intense themes, but ultimately it is still fiction and none of the horrors it depicts are real events or happening to real people, but for a wedding theme? That’s gonna be a no from me. Yes, handmaid costumes are now a pretty familiar site at protests, and there’s nothing wrong with popping on a red cloak and a hat for halloween, but dressing your bridal party up as rape victims feels like a bridge too far.

That said, now that this photo has been released, I need 1,000% more information about this wedding. How far did the Hadmaid’s Tale theme go? Was it just the photos, or did this extend to the entire wedding? Did guests say “Blessed be the fruit” upon arrival? Did they dress the wedding planner up as Aunt Lydia to keep people in line? Did the maid of honor have her clitoris removed? Was the ceremony…a Ceremony? Most importantly, did the entire event end with the bride looking directly to camera while Jackson 5 or some other early sixties bop plays in the background? Because if they are really fans of the show then they’ll know that is the only way to end anything to do with Handmaid’s Tale.

That said, if they used the series’ soundtrack as a guide, the dance floor was probably lit. If guests were even allowed to dance, that is.