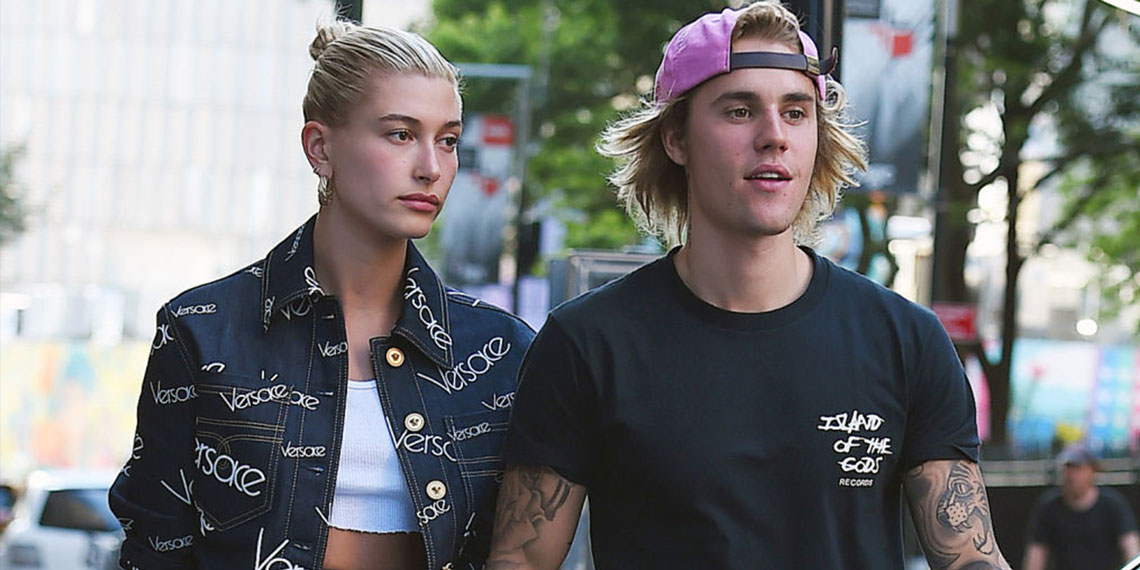 Besides all that stuff that’s happening with Russia or whatever, the most important story this summer has been the barrage of celebrity engagements. Pete and Ariana kicked things off, and most recently, Nick Jonas and Priyanka Chopra hopped on the bandwagon. This, of course, leaves Justin Bieber and Hailey Baldwin, who shocked us all when they recently rekindled their romance. Well, they apparently didn’t want a long engagement, because there are some major hints that they might have already gotten married in secret. Dun dun DUN. Let’s examine the evidence.

First of all, we have some jewelry to discuss. Specifically, Hailey’s recent choice of rings. After Justin proposed to Hailey, she was seen out and about wearing a big gorgeous engagement ring. The ring, which features an oval-shaped diamond and 18k yellow gold, probably costs more than my childhood home, but it’s whatever, I’m not jealous. As you can see in the photos below, Hailey was last seen wearing this ring on July 29th, with no other rings on that finger. That’s important, but I also need to know how she wears white pants that long without getting dirt and sh*t all over them. Celebrities, they’re just like us but cleaner?

Hailey arriving at a studio in NYC. (07.29.2018) #haileybaldwin [We don't own any of these images. All rights reserved to their respective owners. ©]

Fast forward one day to July 30th. Time really flies when you’re having fun. If you look at the photos below, you’ll notice a few things. First of all, Hailey has clearly recently discovered hair gel. I mean, that hair is slick. She’s also wearing the same outfit that I would wear to a ’90s-themed music festival and nowhere else, but she’s just going to a deli in Brooklyn. Same girl, same. The windbreaker (dress?) is sadly not available for purchase online, but the airplane seatbelt can be yours for a small fee of $163. Sign me up!

Sorry, back to the jewelry. If you direct your attention to to Hailey’s ring finger once again, you’ll notice that the engagement ring is gone (I stole it), and has been replaced with two other rings. One is some kind of stackable gold ring, but the other looks, um, a heck of a lot like a wedding ring. Upon closer inspection, it’s a simple band that’s covered in diamonds, which reallllllly looks like a wedding ring. Hm.

Hailey leaving her apartment in Brooklyn, NYC. (07.30.2018) #haileybaldwin [We don't own any of these images. All rights reserved to their respective owners. ©]

So, if the jewelry is any indication, something happened between the 29th and the 30th that made Hailey want to switch up her ring finger situation. So what’s the other evidence that a wedding might have taken place? First of all, we have a telling Justin/paparazzi interaction from July 29th. When asked about new music, he responded that his number-one priority right now is getting married. Like, he said that there wouldn’t be any more new music until after he was married. When I read this, I was thinking the timeframe was probably in months, but maybe he was thinking hours?

That’s not the only thing that makes a secret wedding seem possible. Remember those first photos from July 29th, where Hailey is definitely wearing her ring? Well, she was with Justin that day, and one of the stops they made was at our favorite hangout spot, Hillsong Church. That’s right, they met with the pastor. When JB groupie/Pastor Carl Lentz is involved, you know something important is going down. I love making jokes about Justin and his love for church, but wow, we’ve gotten a lot of great photos of him and various girlfriends leaving church.

So now I’m just waiting for Justin to release a new song, so we know for sure that the wedding is done and dusted. Meanwhile, we’ll all be left to closely examine what combination of rings Hailey is wearing in her paparazzi photos. I would pretend that this sounds boring and stupid, but honestly I can’t get enough of all of these wild celebrity relationship stories. Summer ’18, keep ’em coming.