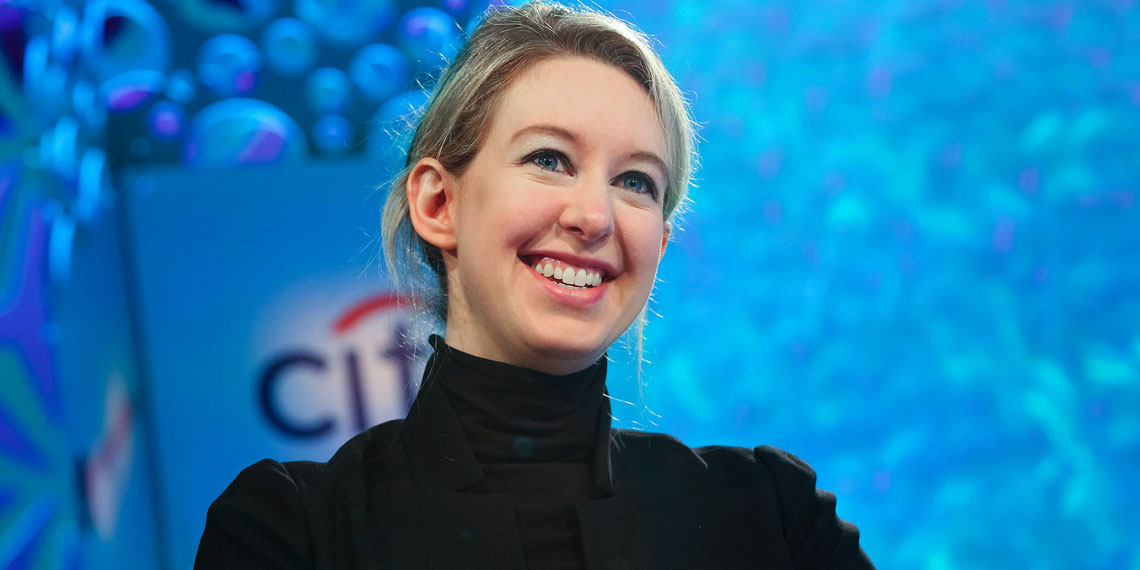 Elizabeth Holmes is many things: a Stanford dropout. A founder of a company that was, at one time, worth $9 billion. An alleged fraudster. And now… a wife? Perhaps, if a recent report in Page Six is to be believed. Though Holmes is currently awaiting trial for wire fraud, due to the fact that her blood testing company, Theranos, could not perform nearly any of the tests it claimed to the public and investors to be able to do, she is still living a pretty luxurious life in San Francisco. (This is white privilege.) Redditors claimed she is out and about, taking her fake wolf-dog, Balto, out to dog parks. She is currently living in a high-end apartment. And, to top it all off, she was noticeably engaged to hotel heir Billy Evans—but now they might be secretly married. Why is it that scammer Billy McFarland has a girlfriend, murder-commissioner Gypsy Rose Blanchard is engaged, and fraudster Elizabeth Holmes is married, and yet I have not committed a high-profile felony, and I can’t even get out of the f*cking booty call zone???

Perhaps that is precisely the problem. If you’ll excuse me, I need to go make a hit list of everyone who has ever wronged me and devise no less than six fake companies.

Just kidding, I won’t do that (right now). But is Elizabeth Holmes really married? It’s possible, but so far neither she nor fiancé Billy have confirmed anything. The news comes from a live recording of Bitch Sesh, a Real Housewives podcast. Apparently, the Bitch Sesh event had an open mic where people could come up and share gossip *jots down notes for my next work happy hour gathering*. A friend of Billy’s got up and said that he and Elizabeth are already married.

The girl who shared this tea claims to have had Friendsgiving at Billy’s apartment with Elizabeth also in attendance. Another audience member told Page Six, “She was sharing details like the fact they have a stripper pole in their apartment. The room audibly gasped, and this girl got a standing ovation. And a shirt!”

A free shirt for selling out your famous friends? Sign me the f*ck up. Just kidding, I don’t have any famous friends! Damn, now I need to go make some so I can share their secrets in exchange for clothing.

Anyway! Holmes and Evans reportedly met at a party in 2017, and it’s unclear why Evans would choose to shack up with someone who is currently facing wire fraud charges (maybe he, heir to the Evans Hotel Group, thought to himself one day, “hmmm, I have too much family money to blow—maybe I should get in a relationship with someone who can help me take care of that problem”). Not surprisingly, Evans’ family is reportedly not pleased about the engagement.

For everyone asking about Holmes’s social media. It’s private. But here are a few screenshots of her and her fiancé we found online. (I personally find it crazy that she’s being charged with 11 felony counts, thousands of people’s lives were harmed, and she’s as happy as can be.) pic.twitter.com/6nYfjltLt4

“His family is like, ‘What the f–k are you doing?’ It’s like he’s been brainwashed,” a source told the New York Post. Still, Evans reportedly insists that the media “has it wrong” about Holmes (and I guess, by extension, the criminal justice system does too). But just like when your mom and dad tried to tell you the 21-year-old who still hung out behind the high school was not a good person to date, Evans doesn’t seem to care what his family thinks. A source told the NY Post back on April 6 that wedding invitations had been sent out about two weeks prior. And although Billy could afford to give Elizabeth a huge rock, he gave her his MIT signet ring, because, the source claimed, “it could end up owned by the feds if she has to give up her material possessions.” I mean, that’s actually kind of smart, but so would be not getting engaged to someone charged with fraud.

If Holmes and Evans are indeed married, I think I speak for all of us when I say that I need all the details of their wedding immediately. Was Balto the ringbearer? Was Sunny Balwani, former Theranos president and Elizabeth’s ex, in attendance? Did Elizabeth still use her fake voice when saying her vows? And, most importantly, what the hell will happen if Elizabeth is indeed sentenced to the 20 years of prison she’s currently facing? No matter what happens, I’m going to need multiple documentaries on every streaming platform out there about Elizabeth’s life behind bars.