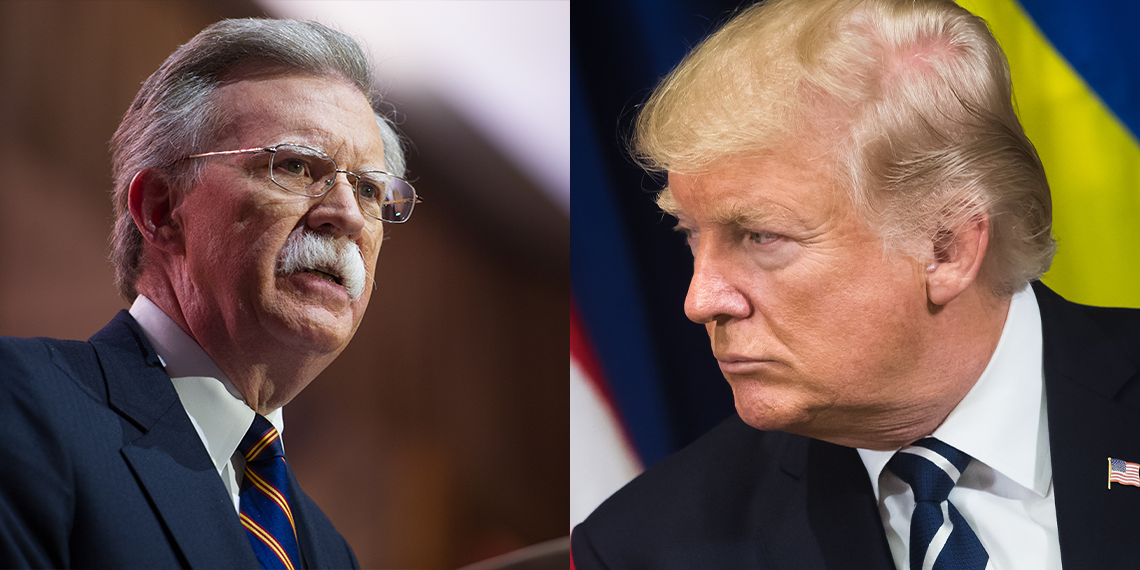 As if there wasn’t enough going on in the world, one of America’s least favorite attention seekers decided now was the time to force himself into the spotlight. That’s right, former National Security Advisor to the Trump Administration, John Bolton decided that now was a good time to publish hs long-awaited book The Room Where It Happened – which, BTW, is a total rip off of Hamilton – and has been causing drama for, like, six months.

Last November, Bolton took to Twitter to start promoting his book, which is basically just a list of all of the shitty things Trump did while Bolton worked for him. Here’s the thing, Bolton obviously thought these crimes were serious enough to at least warrant writing a burn book, but still, he didn’t testify during the impeachment hearings.

While the book is set to come out next week, President Trump is losing his shit about being #exposed, so the Justice Department keeps trying to illegally come up with reasons to block it, either because it includes falsehoods or classified information — Trump can’t make up his mind.

In the epilogue of the book, Bolton apparently explains that the book has no classified information, and Trump is just upset because it “revealed information that can only be described as embarrassing to Trump or as indicative of possible impermissible behavior.”

A number of news outlets have tracked down advanced copies, which we have adapted as a Burn Book of sorts. Much like Regina George, John Bolton likes to write about crimes instead of reporting them.

Throughout the book, Bolton recounts private convos with Don over his 18 months of service. He claims Trump once asked former Chief of Staff John Kelly if Finland was part of Russia, if the UK had any nuclear weapons (yes), and raged about Pearl Harbor during discussions of Japan.

Trump apparently regretted calling North Korean leader  Kim Jong Un “ROCKETMAN” on Twitter and wanted to smooth things by delivering an autographed copy of Elton John’s “Rocket Man” on CD to prove it was actually a term of endearment.

Such a gift would violate U.S. sanctions against the authoritarian regime, but getting it “remained a high priority for several months,” Bolton writes. Un is a millennial, Don, he doesn’t want your Compact Disc.

Bolton says that in 2018, Turkish President Recep Tayyip Erdogan asked Trump to look at a case involving a Turkish firm under investigation by a U.S. Attorney for violating Iranian sanctions.

Trump told Erdogan he would “take care of things” once he got Obama’s prosecutors out. Trump’s refusal to stand up to Erdogan also resulted in the U.S. removing troops from Syria, leaving our Kurdish allies in the dust.

Donald Trump Does Not Care About Human Rights

Bolton says that Trump told China’s leader that he approved of the construction of camps to detain the members of the country’s Uighur Muslim minority. Hundreds of thousands of Uighur Muslims have been held by the Chinese government for “re-education.”

Donald Trump Is A Cheater

Of course, the President has been trying to cheat in his elections with Ukraine and China. We all knew that ‘The Donald’ tried to extort Ukraine into helping him get dirt on his political opponent, namely Joe Biden’s son. Cheating is this President’s MO, so we shouldn’t be surprised that he took his moves over to China.

According to Bolton’s book, Trump asked Xi Jinping, the President of China, to promise that China would buy more produce from American farmers. This would raise his favorability among farmers because that would increase their income, and Trump would be tied to it, bettering his re-election chances.

Trump asks other leaders to help him win in return for support so often that we should come up with a name for it… maybe we could go with ‘quid pro quo?’

Donald Trump Is A Total Wanna-Be

Turns out that Donald “LAW AND ORDER!!!” Trump doesn’t believe that dictators and people in power should face legal consequences for illegal actions. Wild. We already knew Donald Trump is a massive fan of obstructing justice. In his book, Bolton says that Trump seems to have adopted “obstruction of justice as a way of life.”

Apparently, the President is a big fan of intervening in Justice Department investigations that target his friends. Trump is so disgustingly desperate to get approval from dictators across the globe that he will literally do anything to appease them. Two of the many examples of Trump obstructing justice include him trying to get Halkbank of Turkey and ZTE, a Chinese company, out of investigations over sanction violations.

When “Mean Girls” taught us about the different high school cliques, they must have forgotten to include toxic assholes. Bolton’s book describes the White House work environment as overwhelmingly negative. He cites non-stop infighting between staffers who tear each other down to get the ear of the President. Like, is this the White House or a reality show? The answer is both.

While obviously, no one should have to work in that type of environment, I’m having a hard time feeling bad for Bolton. What else was he expecting when he took this job? Much like contestants on The Bachelor, I doubt the people working for Trump are there to make friends.

John Bolton is the Nastiest Skank Bitch I’ve Ever Met. DO NOT TRUST HIM.

Much like Regina George, the concept of irrelevance and being reduced to a lower social circle probably terrified John Bolton, prompting him to release his “tell-all book” and launch himself back into relevance. He certainly wasn’t motivated by what’s best for the public interest, because if he was, he would have released this information via congressional testimony during the impeachment hearings.

Bolton even covers the impeachment inquiry in his book, citing specific things he would have done differently or further explored if he was in charge. He spends 592 whole pages painting himself as a victim and an innocent bystander to Trump’s crimes as if he isn’t complicit in (at the very minimum) looking the other way.

Like, I appreciate the sentiment of publishing all of the crimes that Trump committed in office, but if Bolton actually cared about this country and getting him out of office, he had so many other opportunities to do so for free and in a more accessible way than this stupid book. At its core, this book is a pathetic attempt at revenge on the Trump administration.

Unlike Regina George, Bolton isn’t scattering the pages of his book for free and is charging, like, close to 20 dollars for it. F*cking classic. As much as we all love hearing about other people’s drama, especially when it comes to the President, let’s all make a collective agreement to not buy his book. Instead of spending the $20 on it, buy a book (or two or three) from a Black author. Personally, I’m in the middle of Symone Sanders’ book, and I’m a huge fan.