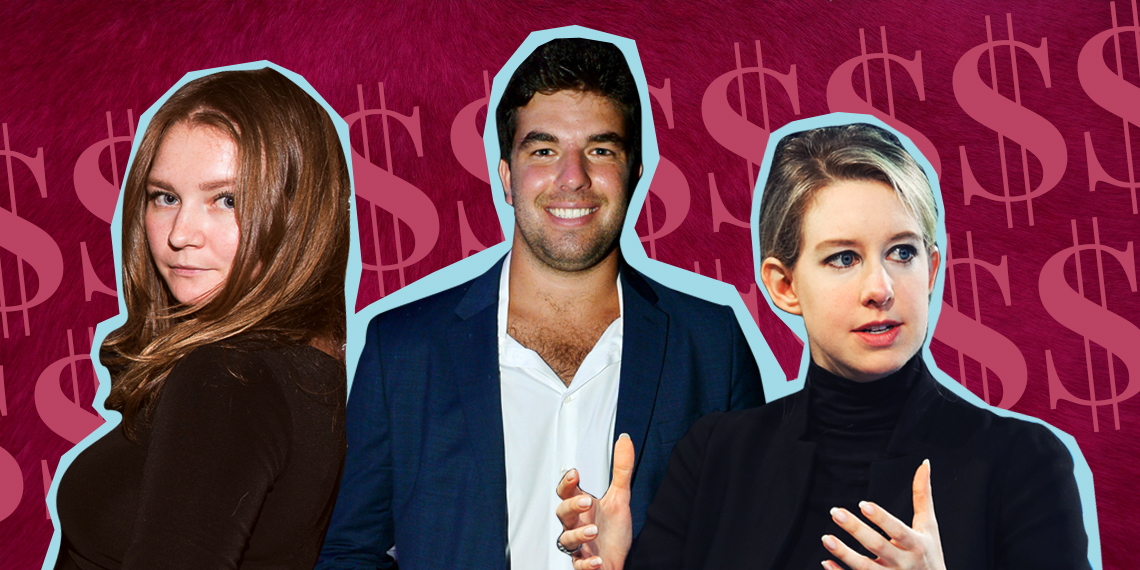 The Uncomfortable Reason Behind The Rise Of Millennial Scammers

In 2019, it’s old news that we love a good scamming story. But among the “stars” of this year’s scamming news cycle—Anna Delvey, Billy McFarland, and Elizabeth Holmes, to name a few—there’s one clear similarity. They’re all millennial scammers. Now, our generation has been accused of a lot of things: we’re lazy and entitled, we ruin whole industries, and we simply cannot get enough of avocado toast. But maybe we’ve been dancing around the most damning accusation of all. As stories pile up of outrageous con artists born between 1981 and 1996, I have to ask: are millennials the scammer generation?

If we are, I can hardly say it’s surprising. Growing up, I saw a lot of promises about “the right path” be shattered. Our parents told us that college degrees were non-negotiable if we wanted to get ahead in life (no matter how much debt we incurred), while dropouts like Zuckerberg, Spiegel, and Holmes dominated the landscape of professional success. Then Instagram, and the subsequent world of influencers was born, and the idea of blindly taking the expected steps through life began to seem not just uninspired, but downright stupid. Both types of self-made success—from Silicon Valley CEO to future Bachelor contestants—preached the same ethos. If you work 20 hours a day, abandon everything else in your life, and operate with complete confidence in yourself and your ideas, you will find success.

I was told by a former business partner that I “lacked work ethic and didn’t know the good opportunity I had in front of me.’ I left anyways because I knew deep down in my heart that SERVITUDE NOT MONEY needed to be my sole focus. Under my breath I said, “WATCH ME.” I logged onto FB to find that I was accidentally included on a group message that a former client (whom I REALLY LIKED) wrote to her husband and son saying,“ OMG Paradise?!!! Hasn’t she taken enough of a beating already? ?” It HURT to know that my co-workers, clients, “friends”, OH AND ENTIRE FUCKING NATION judged me. But I knew that one moment in my life wasn’t going to define me nor keep me from the bright future and impact I was going to make in this world. I thought to myself, “WATCH ME GET THROUGH THIS.” My family was worried, my friends were concerned. I was even hospitalized last November because of the DEBILITATING EFFECTS OF ANXIETY AND FEAR I was facing with the upcoming season of The Bachelor. I had zero income, zero savings and now a $12,000 hospital bill that I chose to ignore because I couldn’t emotionally “deal” and it was sent to collections DAMAGING my credit. No money, no savings, no more good credit. Fear crept it and emotionally I was breaking under the pressure. I wrote down affirmations all over my house on post-it notes that when read made me focus on the SUCCESS I WOULD EARN by focusing on language and actions that made me feel empowered. And then I applied them. See, when others were talking and judging I was working because I knew the bigger picture. So, the next time someone tries to cast doubt on your dreams. Smile to them and think to yourself, “Watch me Mother Fucker.” And then go and get to work. xx

Of course, the path of betting on yourself and taking risks is made a lot easier if you have a trust fund to fall back on—and many millennial success stories did. For those of us too stupid to invent our own companies, too ugly to make it on Instagram, or too poor to consider either option, there was the post-recession job market. There, the cutthroat competition (even for internships!) and the increasingly insane demands of office jobs (be available on Slack 24/7! Be prepared to take over anyone else’s job at any time!) made the glittering vision of those “working for themselves” all the more appealing. And when we’re treated to a constant feed of photos of their glamorous lives, and Twitter updates on their successes, frustration builds.

Enter: the scammer. Like every millennial, they were inundated with images of extraordinary success and luxury, and the message that if they just worked hard enough or really believed in themselves, anything was possible. So, our millennial scammers said to themselves: why couldn’t that be me? They dreamed big: McFarland pitched Fyre Fest; Holmes pitched Theranos; and Delvey pitched, well, herself, as a larger-than-life heiress, and to a lesser degree, a $50m private club on Park Avenue. They ensured that the idea looked good: McFarland unrolled his Insta-model ad campaign; Holmes filled her board with incredibly high-profile businessmen; and Delvey lived in designer clothes and luxury hotels. And whenever they were questioned on details, they pivoted the conversation back to the big picture: an end game so attractive that listeners wanted, desperately, to believe it.

While scammers have always existed, what’s really striking about millennial scammers is how grandiose their visions are, and the extent to which they seem to believe their own lies. If people continue to make millions off Instagram—even though we’ve been shown time and time again how much of Instagram is fake—then it makes sense that millennial scammers assume they can cash in big, even if there’s no reality to back up their vision. People are uninterested in, say, the actual science behind improved diagnostic testing, or the exact location of a music festival’s toilets. Those details would never have attracted the millions they raised—only the fully-formed, visually appealing outcome would. In our image-obsessed culture, with the constant refrain of “if you didn’t post a picture, did it even really happen,” we’re essentially begging to be scammed by grifters like these.

Why do I dress to impress Janet in accounting? @whenshappyhr

Until we begin to mend the rift between image and reality that social media has created, and the concept of the self-made billionaire is unpacked, we should expect more millennial con artists pitching us beautiful lies. Because we grew up in such a broken economic system, where following the expected steps didn’t get us the results we were promised, it was attractive to believe that anyone could transform into an overnight success. But these millennial scammers have proven that until we start valuing expertise and honesty at the same level as we do a good aesthetic, we’re not providing new opportunities to anyone but those willing to lie their way to the top. Right now, the path to Silicon Valley or Instagram success demands a “fake it ‘til you make it” approach. So really, the question shouldn’t be “why are there so many millennial scammers”. It should be “why aren’t there more?”