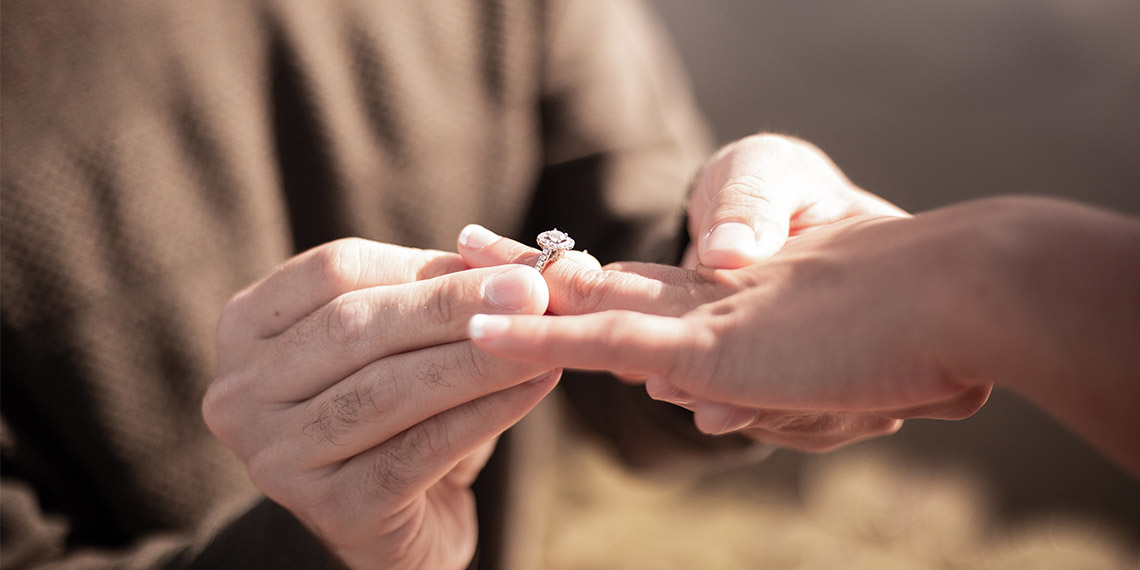 The Pandemic Is Postponing Weddings, But Proposals Aren’t Stopping

You know, it’s cute, everyone keeps saying things like “love is not canceled,” and it’s inspiring, really, it is, but if you were a bride planning on getting married this year, and now your plans are f*cked, it’s hard not to feel like love is pretty damn canceled. But brides- and grooms-to-be are taking it in stride and serving up proverbial “F you(s)” to the virus with their socially distant elopements, live-streamed and drive-by weddings, and hilariously self-aware change-the-date announcements. But the fact of the matter remains, we still have very few answers about when all this insanity is going to go away and when the wedding world can rise from the ashes.

We’ve been obsessed with all the #quarantineengagement content filling our feeds, so much so that it’s kind of making us wonder if being trapped in a tiny apartment with your S.O. for months could actually be good for your relationship. Like, if you want to put a ring on it while trying to coexist in isolation, then maybe you’re really in it for keeps?

everyone: 2020 is cancelled. this happy couple: not today covid. 💍 congrats to @dulcevidaa & @iam_kbatch on their engagement! 🥂

After speaking with a handful of newly engaged couples and a few engagement experts, one thing is clear: a global pandemic isn’t hurting the proposal game. The ‘Rona might be a raging bitch, but guys and girls ready to pop the question aren’t about to throw all their plans out the window.

College sweethearts Kristi and Kelly got engaged with a pretty epic double proposal on Leap Day, just two weeks ahead of the lockdown. After a trip to the Point Pleasant boardwalk, they headed to the arcade to feel like kids again.

“We played for a little and then we decided to take a photo booth picture (it’s become our thing over the years),” Kristi recalls. “We were taking the third picture for the strip when Kelly said ‘let’s do a silly face!’ So, I immediately closed my eyes and stuck out my tongue… when I opened my eyes she was holding a ring! I was in shock and immediately started crying.”

But Kelly wasn’t the only one with a proposal up her sleeve that day—Kristi, completely coincidentally, had also chosen that day to pop the question. It took some urging to get her back home, but once they arrived, Kelly saw that the apartment was decorated with a trail of roses and candles leading to their bedroom.

“She walked into the room and burst into tears,” Kristi says, “because it was filled with pictures of us throughout the years, balloons, more roses and candles, and on the bouquet of roses was a ring for her. I got down on one knee and asked her if she would marry me! She said YES and then we got ready for a celebratory dinner for two with lots of champagne.”

Little did the two know that a few weeks later, a celebratory dinner for two would become the date-night norm for couples in quarantine. Kristi shares that “for about a week we were able to enjoy the bliss of being engaged. We were able to tell all of our family and friends through Facebook, FaceTime, and Instagram, but we have not yet been able to celebrate with anyone in person, which is a little disheartening for us.”

Days after they broke the news to their favorite people, Kristi says that her parents, excitedly, started to plan a June engagement party for them.

“Currently the party is on hold and up in the air,” Kristi explains. “We are trying to stay hopeful that we can have that special time with our family eventually, but at the same time, we’re so thankful that right now everyone is home, safe, and healthy.”

It’s definitely a weird time to propose right now with stay-at-home orders in place, but couples are strategizing how to pop the question in a special way while staying socially distant. If you weren’t stuck safe at home, what would you be doing, where would you be going, how would you be having fun with your future fiancé? That’s exactly where you need to start with your proposal. At least, that’s what The Yes Girls, the beauty and brains behind some of the world’s most incredible and personal marriage proposals, advise.

Having had a part in planning over 3,000 custom proposals since their launch in 2008, Megan Bicklein, Yes Girls proposal planner and designer, is feeling like now, more than ever, they need to show up for their clients. “We are the rock for our clients during one of the most intense, anxiety-ridden, and life-changing times in their lives, so we have to be as level-headed and supportive as we can possibly be, while taking their lead,” Bicklein says.

She explains that while some of her clients still want to go through with their proposals as planned (regardless of the restrictions at play in their respective cities), some are calling “in a panic because their vacation was cancelled and they need to come up with a new plan, some are unsure of what this means for their future, and some just really need a sounding board, someone to vent to during this uncertain time.”

Similarly to what couples have been doing to pivot their wedding plans while respecting social distancing cues, The Yes Girls are becoming well-versed in the various virtual ways to propose. “We’re currently planning a proposal right now that plays off of the virtual zoo tours that many local zoos are leveraging to draw audiences in from the comfort of their own homes. The video call will look much like the typical virtual tours being offered right now, but with a fun surprise at the end!”

If nothing else, the pandemic, as horrific and devastating as it may be, is ushering in a whole new wave of creativity and pioneerism in the proposal space.

“What we have seen more of is people caring less about the ‘showiness’ of the proposal and more about the overall mood and experience with their loved one,” says Bicklein. “Before, there was always a ‘how can I make this proposal so over-the-top’ goal behind the events, but now, we’re seeing more clients who just want to give their partner a meaningful memory to have forever. I think once the unlimited resources are taken away, we really get down to the heart of what we do this for: to help those popping the question make lasting and authentic impressions on those they love most.”

And when you’re holed up at home with all those resources taken away, something super simple can be the perfect proposal prelude. For Jess and Todd, who found love through a dating app, breakfast in bed on Sunday, April 12th (six days before her 40th birthday) was kind of everything.

“He woke up before me, which usually does not happen, and when I said ‘what are you doing,’ he said ‘I’m going to make you breakfast today.’” Maybe she was nervous about what would be coming out of the kitchen or perhaps it was more of a “let’s be cute and pretend cook together like one of those influencer couples,” but when Jess offered to help, her guy immediately told her to stay comfy and get more sleep. “He made me a yummy breakfast, brought it to me on a platter with a rose, and when he placed it down on the nightstand, he dropped to one knee. It was perfect!”

Simplicity at its finest, ladies and gentlemen.

Susie Saltzman, a NYC-based fine jewelry designer, tells us that she’s seen no dip in engagement momentum since quarantine became the norm. Granted, for her, since 80% of the clients she works with live outside of the tri-state area, Zoom designing and ring brainstorming are nothing new. But that doesn’t mean that she’s any less pumped to “get the ball rolling and get people excited about the life that WILL HAPPEN once these wild days are past us.”

Love is Love is Love | Best, BEST wishes Danielle & Curt | We are so honored to celebrate your joyous love today …& every day! | Thank you for #custom making your ring with us!

Since mid-March, Susie says she’s finished and shipped 18 engagement rings to clients who are ready “to move forward with their lives in the ways that they can.” And, like The Yes Girls, SS is a big believer in humble gestures to lock it down.

“I have a few clients coming up with really sweet private ways to propose at home,” Saltzman shares.  I think people realize how precious ‘normalcy’ is and how much we take it for granted in our day-to-day lives. Tomorrow is not promised, and this uncertain, unprecedented time has been a true reality check for people.” She adds, “I think our inability to do some of life’s simplest activities (like go out to eat with a loved one, celebrate your birthday, take your children to school) has made people really want to embrace life once this is over. People want to celebrate their love NOW—they don’t want to wait to formalize their commitment to one another.”

That’s what Shannon’s fiancé, David (one of her older brother’s besties-turned-bae), was thinking when he proposed with flowers (brought over by his mom) after a “fancy date night in” on Friday, April 17th.

“Since we were unable to go out with everything going on, we got all dressed up and cooked dinner together. Nothing was out of the ordinary until David went to the front door after dinner and got flowers. He said, ‘you can’t have date night without flowers.’ I still didn’t think anything was going on, because before all of this, David would get me flowers all the time. I was going to put the flowers away and was in the kitchen near the sink when I turned around and he was down on one knee. I was so surprised it took a moment to realize that this was really happening. I started bawling, and with the perfect speech he asked me to marry him. I was so happy that I said yes before he even opened the ring box. Despite being quarantined, it was the happiest, most perfect day!”

“I have had a Pinterest board for our wedding for some time now,” explains Shannon. “I have so much in mind for what we want for our special day, but it’s kind of a catch-22. We have all of this time at home to be able to plan, but with so many places closed, we’re pretty limited. Also, who knows when this will all be normal, when weddings can happen, and how many people will ultimately be allowed to be gathered at once when they do.” Despite all the uncertainty, Shannon says, “It’s hard to start planning with so many unknowns, but, right now, we are enjoying being engaged and will start planning in the near future.”

True, it’s a whole new world for the just-engaged set, but somehow we think it’ll all be okay… Especially since you can still actually do a lot of wedding planning while in quarantine. While day drinking. Without pants, even.

Danielle is a 30-something mama who loves being able to write about reality TV (there’s no better season that Bachelor in Paradise season) and curse, because the rest of her day is usually a mix of Disney-rated randomness and trying to be a good role model for her littles. She’s a wedding publicist and branding wordsmith and writes bridal, relationship, sex, and lifestyle bylines regularly for sites including Wedding Chicks and Style Me Pretty. So, if you need a pulse check on any trends for tying the knot or being knotty, she’s got ya.