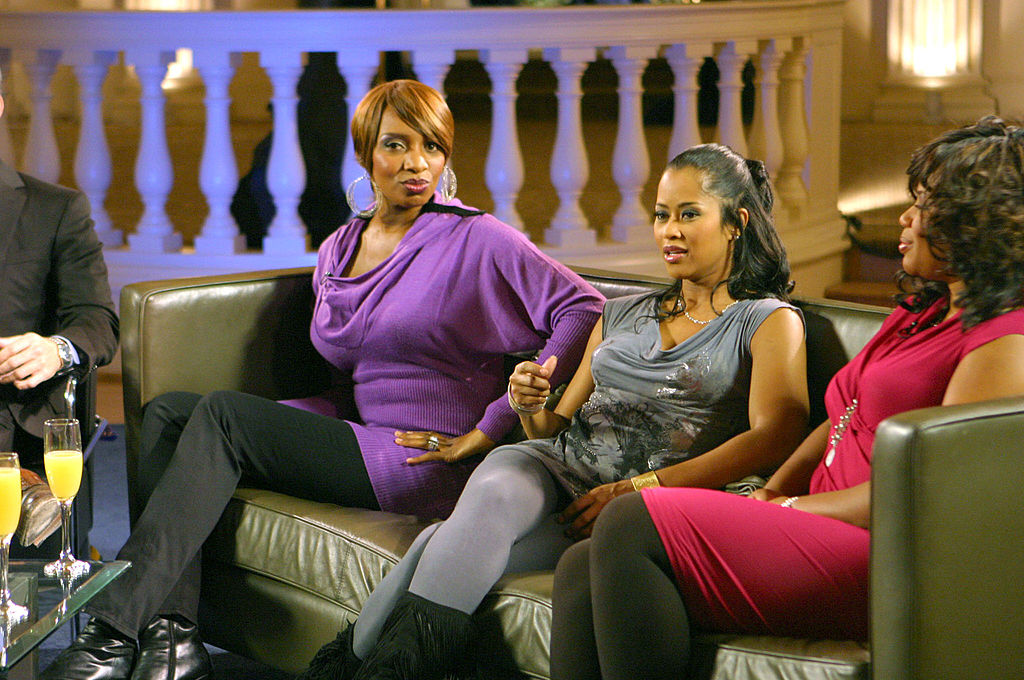 It’s been nearly 15 years since the creation of the first Real Housewives show, and the concept has grown and changed into a reality TV empire with millions of devoted viewers across multiple continents. There are many things to love about Housewives, but there really is nothing like a reunion. Every time Andy Cohen sits down with these women, it feels like a must-see television event, and the level of glam has risen accordingly.

But while the Housewives have full teams prepping them to be camera-ready for a grueling day on the couches, not all reunion looks are slam dunks. From decent concepts that fell flat to looks that are just painfully outdated, these are the most tragic reunion looks of all time.

Danielle Staub is tragic in many ways, but this iconically bad reunion look tops the list. Certainly, the reunion dress code was more casual back in the day, but while the other women wore cocktail dresses, Danielle showed up in a white tank top and a sequined mini skirt that’s giving me strong Wet Seal vibes. She finished off the look with a statement necklace and some black peep-toe booties, which thankfully you can’t see in this picture, because they may have actually made the outfit worse.

The season seven RHOC reunion is like a time capsule, because it’s a jarring look at the brief time that Tamra didn’t hate Gretchen Rossi. For this reunion, Tamra was clearly taking style cues from Gretch, as evidenced by her massive pageant hair. The two sat next to each other wearing the exact same color dresses and similar hairstyles, like some Newport Beach Us tethers. In a technical sense, Tamra looked good at this reunion, but the Gretchen cosplay is just not for her, and soon enough, these two went back to being enemies.

For RHOP’s legendary fourth season, they went with an all-white reunion theme, to varying degrees of success. Ashley’s outfit was definitely the worst of the bunch. The fully-sheer lace bottom half was a choice, as was the large mesh boob panel, but my greatest issue is with the cape. First of all, why wear a cape in the first place? You’re sitting the whole time, so it’s just an extra piece of fabric that’s going to be bunched up on the couch under you. But also, the strip of fabric across her chest that held the cape in place made the actual dress look even worse. It’s a no from me.

Sometimes you can tell there’s a good idea somewhere within a look, but the execution just doesn’t work. For this reunion, I liked that the Countess was giving us more of a fun disco vibe, but this dress looks beyond cheap. Stretchy metallic fabrics are tough to get right, and while money can’t buy you class, it could have bought Luann something that looked a little more high-end. This was before her iconic partnership with Jovani, and it shows.

In more recent years, the Atlanta women have consistently turned out the best, most glamorous reunion looks of any franchise, but season one was… rough. No one came dressed to impress, but NeNe’s extra-long cowl-neck top paired with black pants is absolutely disastrous. Over the past 12 years, NeNe’s style transformation has been something to behold, and it’s wild to think that this was probably considered cute back in 2008. We have truly been through so much this these women.

NeNe’s first reunion look hasn’t aged well, but I’m pretty sure Kim Zolciak’s first reunion look is timelessly fugly. This was back in the Big Poppa era, and it’s absolutely shocking to realize that Kim was still in her 20s during RHOA‘s first season. Here, she wore a mustard-yellow silk blouse, topped with a black vest and paired with black slacks. Kim looked more like a blackjack dealer at a third-rate casino than a Real Housewife. This was also during the prime ~wig~ era, and that synthetic-looking blonde hair makes me itchy just from looking at it.

The cast of RHOBH doesn’t take their glam lightly, and though she’s the most famous person on the show, Denise was clearly unprepared for her first season. Aside from the fact that I don’t think this beige dress is particularly cute or flattering, the dress and ponytail combo is about seven notches of glam below everyone else’s looks. I mean, Dorit had 10 pounds of metal clips on her head, and Kyle Richards was in a floor-length neon gown. I love Denise as a housewife, but she’s never going to win any fashion awards around these ladies.

If you don’t watch RHOD, Kameron is basically a Barbie doll come to life, so suffice it to say that her sense of style doesn’t appeal to everyone. I think a lot of her head-to-toe pink looks are actually really cute on her, but this red dress from the most recent reunion just wasn’t it. From the floor up to the chest it’s pretty! But then you get to the shoulder region, where two pieces of tulle come together into giant puff-balls that literally touch her ears. Considering we mostly see the women from the waist up, it was incredibly distracting to constantly see Kam’s earrings get caught in her dress. This whole reunion was a mess, and this look wasn’t helping.

Gretchen has an interesting sense of style (see Tamra’s pageant look above), but I really can’t with the glorified figure skating costume she wore to the season eight reunion. Turquoise is a hard color to pull off, and the weird one sleeve/neck choker silhouette combined with the bedazzled waist adornment is just too much. This would’ve looked great on Tonya Harding, but it’s not a dress that should be worn anywhere other than an ice rink. Also, with all of her hair bunched on the same side as the dress’s fabric, this whole look feels imbalanced.

There have been many other reunion misses over the years, but these were the ones that I just couldn’t ignore. Let me know in the comments what your (least) favorite looks of all time are, because I could talk about this for days.