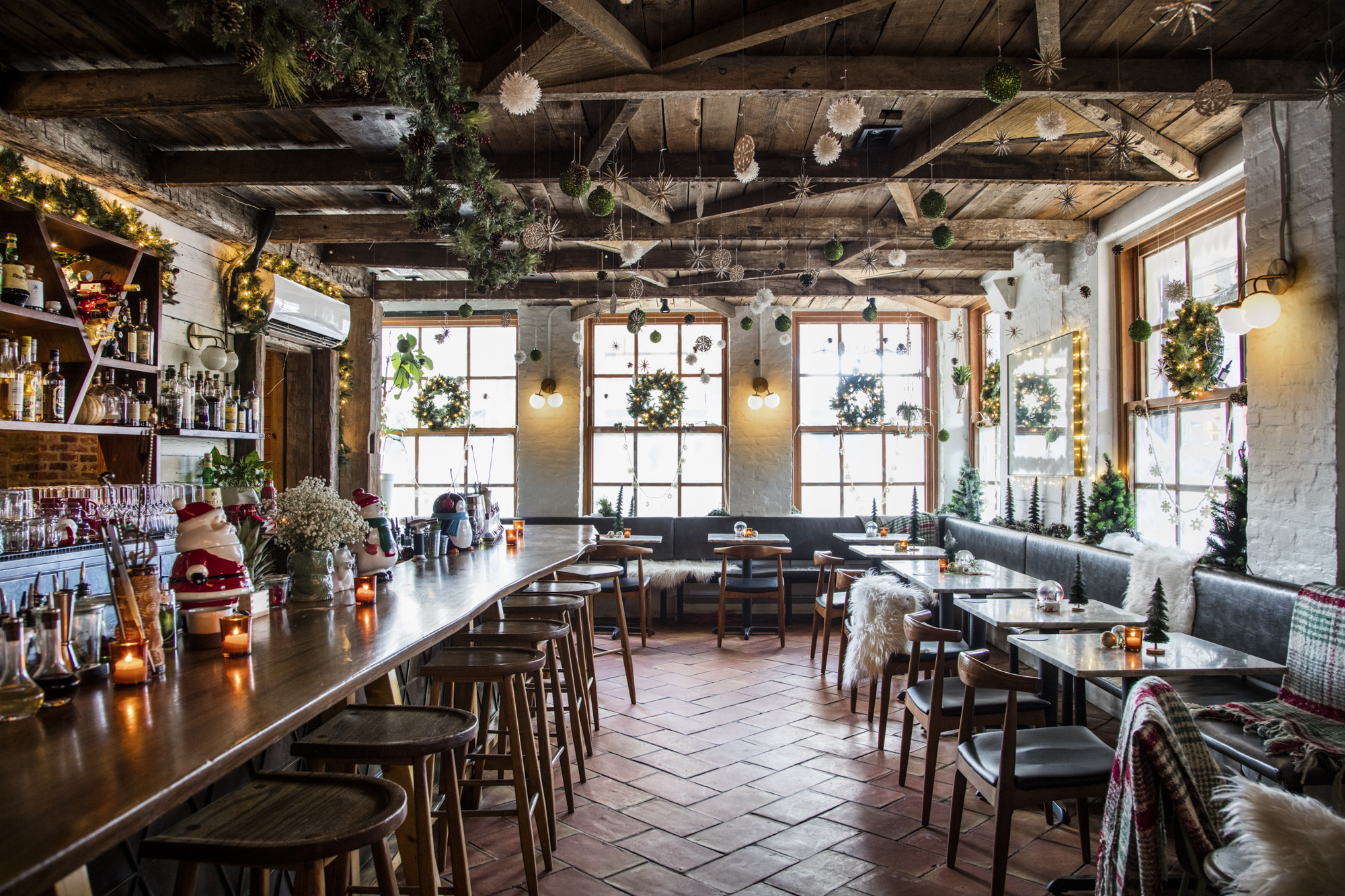 The Most Festive NYC Bars To Drink At This Holiday Season

I’ve lived in this city for so long that truly nothing phases me anymore, and that’s a personal achievement of which I’m very proud. However, there is one exception to my inability to experience awe, and that is when Gingerbread Lane comes to town, when Bloomingdale’s is decked in twinkly lights and, of course, when drinking spiked eggnog and hot chocolate is not only acceptable, but encouraged. I’m talking about the most wonderful time of the year, people! The motherf*ckin’ holidays! Am I getting too excited? Whatever. One more thing this New Yorker loves about the holidays in this godforsaken city is the festive decor that takes over my favorite watering holes, hotels, and restaurants. If you, too, have no shame in your game and want to sip spiked eggnog under mistletoe, but don’t know where to go, I got you. These are the most festive holiday spots that you don’t already know about.

This is the type of place I usually avoid because lots of people and staying out past 10pm aren’t really my vibe, but I think I may just move in here between the months of December and March for the holiday themed pop-up. The Lobby Bar will be transforming into what the Dream is calling The Winter Rose Garden and what I call What Dreams Are Made Of. This particular pop-up is exciting because it’s the downtown hotel’s first foray into holiday festivities, and rest assured, they’re pulling out all the damn stops. I’m talking oversized rose walls (made with 15,000 red roses), red furniture, and more candles than Anthropologie. And obviously, they have a special menu of holiday-inspired cocktails. The Primrose Cider is my personal fave because it’s made with classics like sparkling rosé, Barking Irons Applejack, cinnamon syrup, lemon juice, and a rose ice cube. I mean, yum?

This is the only place in Midtown I’ll go without complaining about all the finance bros Juuling everywhere I look. For this holiday pop-up, which they’re calling Midwinter Nights’ Dream, they are seriously going all out, and I’m not mad about it. As much as I love holiday-themed alcohol, the actual reason I love this time of year is because of the genuinely cheerful atmosphere, and this place understands that. Obviously, they’re doing the red and gold ribbons, the hanging lights, and the gorgeous garland, but most importantly, they’re having a tunnel of light, because if you go to a holiday pop-up and didn’t post an Instagram of it, did you even go? As for the holiday menu, def opt for a Peppermint Mojito, which is a normal mojito, but served in an ornament! Is that festive af or what?

If you don’t remember from my last article where Magic Hour got a mention re: where to drink enormous drinks, let me just say that I love this place. For the holidays this year, it will turn into what I can only imagine is Nicki Minaj’s wet dream. It’s called Pink Holiday Playground and will boast ceilings covered in hot pink twinkly lights, oversized disco balls, and human-sized festive bears. Oh, and there’s also a carousel, because why not? Not that it’s a competition, but Magic Hour is playing to win and they got my vote. Also, my general policy at bars is to not eat the food, but I’ll make an exception for the Pink Dough Pie, which is not only meant for 12 people, but it’s also a delish boozy apple cider doughnut-pie hybrid (sold) filled with Honeycrisp apples and drizzled with a maple bourbon glaze, topped with pink sprinkles and pink chocolate balls. My love language is officially sweet pizza that will get me drunk. How do people even come up with this stuff?

Though technically neither a bar nor a restaurant, Club Wyndham earned its spot on this list because it is committed to spreading holiday cheer, like, for real. Don’t believe me? Check out the aggressively Instagrammable holiday suite inspired by, you guessed it, Buddy the f*ckin’ Elf. By the way, that movie was released in 2003, so if you don’t already feel old af, how about now? Just from looking at the photos of this suite, I can say with confidence that there were no cotton-headed ninny-muggins on this hotel’s design team, and that I am blown away. Because you are absolutely playing yourself if you think you aren’t already dead-set on booking this suite, I’ll let you know what’s included, starting with the full kitchen that’s stocked with the ingredients to recreate Buddy’s famous spaghetti and syrup dish. Honestly, I don’t really know if that’s a selling point, but I do love a hotel suite with a full kitchen. My personal favorite element of this suite, though, is the enormous living room that’s fully decked out in holiday garb (including an oversized Christmas tree). If that’s not festive, tell me what is. I’ll wait.

I am a Manhattan snob and generally don’t acknowledge the other boroughs, but Sunday in Brooklyn is the one exception. Running through the end of December, this beautiful restaurant that makes a case for minimalist design is doing SNOWday in Brooklyn. Yes, their holiday pop-up has arrived and I’m already on the L. I’ll get to the menu in a minute, but first I want to talk about the vibe of the place during this magical time. Some of these pop-ups go a little overboard (do a bar crawl one weekend and lmk which ones you think those are), but Sunday in Brooklyn is classy af. It’s how I imagine Aidan and Carrie would decorate his Suffern house for the holidays if they had stayed together. The place generally has kind of a rustic feel, but with the garlands hanging from the wooden beams on the ceiling and the wreaths in every window, it’s hard to stay away. I ordered the Scroogin’ For A Bruisin’ because I love a good Grease reference, but also because it’s delicious with scotch, baijiu, China-China Amer, pineapple, cinnamon, sesame oil, and brown rice. Those last two ingredients threw me too, but they’re only there to give the drink a little bit of texture, not to give it a salad dressing flavor.

Before this past Sunday, the only time I’ve ever been to The NoMad Bar was on a horrible date that ended with him telling me how much he misses his ex girlfriend. Awesome. Anyway, after hearing about this place’s new Holiday Spectacular cocktail popup, I decided to start positively associating it with two things I love: Christmas and alcohol. Honestly, they didn’t have to do much beyond the bar’s typical decor because it’s already pretty festive in a very chic way. Dark leather tufted booths, glossy wooden tables, the kind of lighting that only seems to exist in Woody Allen movies…etc. The one thing they’re doing differently for their Holiday Spectacular is the charming cocktail menu that’s separated by Naughty and Nice cocktails. Lol. I had one from each column and let my reaction determine which I am and, to everyone’s surprise, I’m nice! The Winter Wonderland, which is a milky punch—that tastes like pumpkin pie in cocktail form—is served in a snow globe. I can’t resist a snow globe. This is also a fun bar to hit up because the NoMad Hotel is a cool place to walk around afterwards, especially when you’re a little tipsy.