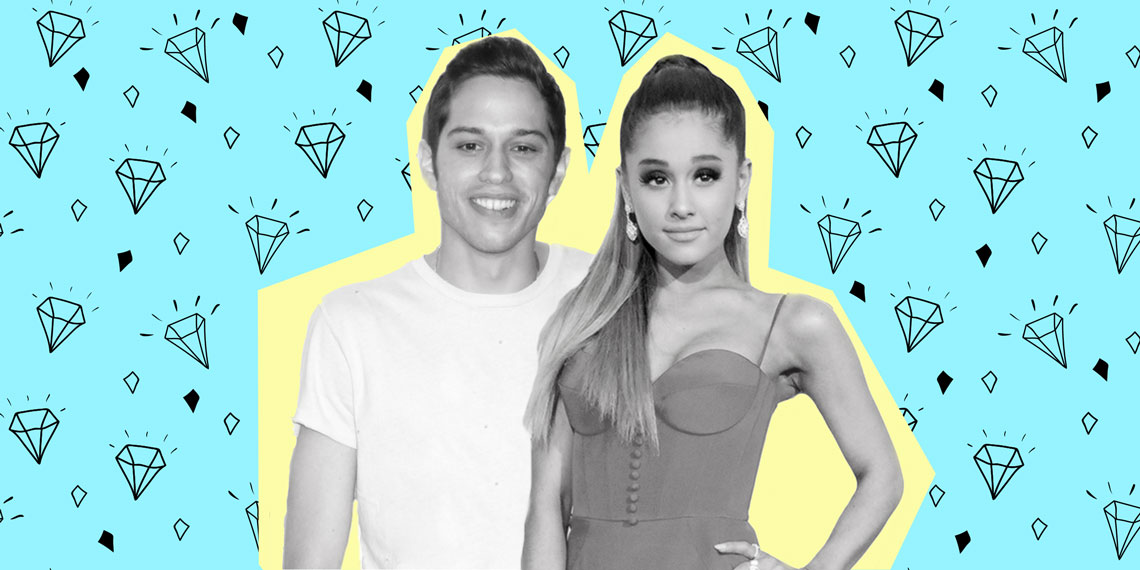 The Most Embarrassing Celebrity Couples Tattoos

I am so pro-tattoos, guys. I even have one. It’s a teeny design from a literary reference. You know what it’s not? A relationship-related tattoo. Because, unlike many of our favorite celebs, I am not a f*cking moron. For some reason in the world of Hollywood, it’s considered super cool and romantic to get your partner’s name or some kind of matching tat with your current lover. Considering I’ve had milk in my fridge longer than most celebrity relationships, this is a very, very dumb idea. And once their confronted with the realities of their mistake, or the drugs wear off, celebs have no choice but to try to cover up their poor choices. Here are the worst celebrity couples tattoos to remind you to think before you ink.

The reigning king and queen of tattoo f*ckups, and the source of a lot of drama recently, Ariana and Pete’s short-term relationship resulted in so many tattoos to cover up. Pete had Ariana’s bunny ear mask behind his ear, Ariana has “always” on her ribs in Pete’s handwriting. They have matching tattoos of: hearts, the word “reborn”, “H2GKMO” which apparently means “honest to God, knock me out”, clouds, Pete’s dad’s badge number, the phrase “mille tendresse”, and each other’s name/initials on their ring fingers. Like, how did they even have time for that many couples tattoos? Did they just schedule a recurring weekly appointment? With the end of their engagement, the tattoo cover-ups have started. But joke’s on them, because it seems that they now have new matching tattoos of black hearts—one to cover Pete’s bunny mask and one that covers Pete’s name on Ariana’s finger. Pete also has a teeny A next to his black heart. I guess so he can remember who gave it to him? How poetic.

Pete is on this list ~again~ because this is not the only time he’s had to cover up an awful relationship tattoo. Literally, earlier this year, he covered up some real scary tattoos of his ex Cazzie David, as well as some questionable quotes. You’d think he would have learned.

ALSO, Ariana Grande recently covered up *another* tattoo related to Pete. She had previously gotten his dad’s badge number on her foot, but it’s since been covered up with the name “Myron”, which is the name of Mac Miller’s dog. So I guess she’s not that grateful for her ex after all… too soon? You’re right, probably too soon.

Who even remembers a world where Cheetah Girl Adrienne Bailon dated total trash like Rob Kardashian? What’s even weirder is the fact that I don’t think he was even trash back then. He was fit, alert, in school at USC, and I think he wanted to go to law school? Who would have thought he’d become the sad sack he is now, with a baby mama like Blac Chyna, and his mom running his sock line? Anyway. Rob’s life took a turn for the pathetic after he cheated on Adrienne, who got her ass TF out. Unforunately, said ass was still branded with Rob’s name. It’s unknown whether Bailon put something else over the probs pretty bad scar left from her tattoo removal, but let’s just hope it’s not another relationship tattoo.

Rob, meanwhile, covered up his Adrienne tattoo on his rib cage with a Rita Ora design that Kim K herself referred to as, “a life-sized Barbie doll that has now turned into a Cabbage Patch” with Rob’s weight gain. Not nice, Kim. We don’t know what it looks like now, but I’m going to say probs not amazing.

Before Angelina was the mother of a litter, she was a wild child who wore vials of other people’s blood as fashion and got celebrity couples tattoos. The “Billy Bob” on her arm is for Billy Bob Thornton, which she eventually got removed and replaced with her kid’s birthplace coordinates. She was Billy Bob’s fifth marriage, so I kinda think she should have seen this coming. At least the cover-up is about her kids and not Brad. You’re stuck with your kids forever.

“For me, this is the moment, where finally my life is kind of in line, and I feel I'm finally where I should be.” – Angelina Jolie

Charlie and Denise had a tumultuous relationship, but that didn’t stop them from getting each other’s names tattooed on their limbs. Charlie got his covered up by the anthem of his mental breakdown, “Winning”, and Denise got a v strange little fairy on hers.

It’s easy to forget that Johnny Depp and Winona Rider were a thing in the 90s/early 2000s, but it’s probably because most of you weren’t even f*cking born yet. Johnny got “Winona Forever” tatted on him after only five months of dating. The couple lasted three years before finally calling it quits and Johnny lasered off part of his tattoo. It now reads “Wino Forever”. I would be mad at it, but it’s a lifestyle. More specifically, my lifestyle.