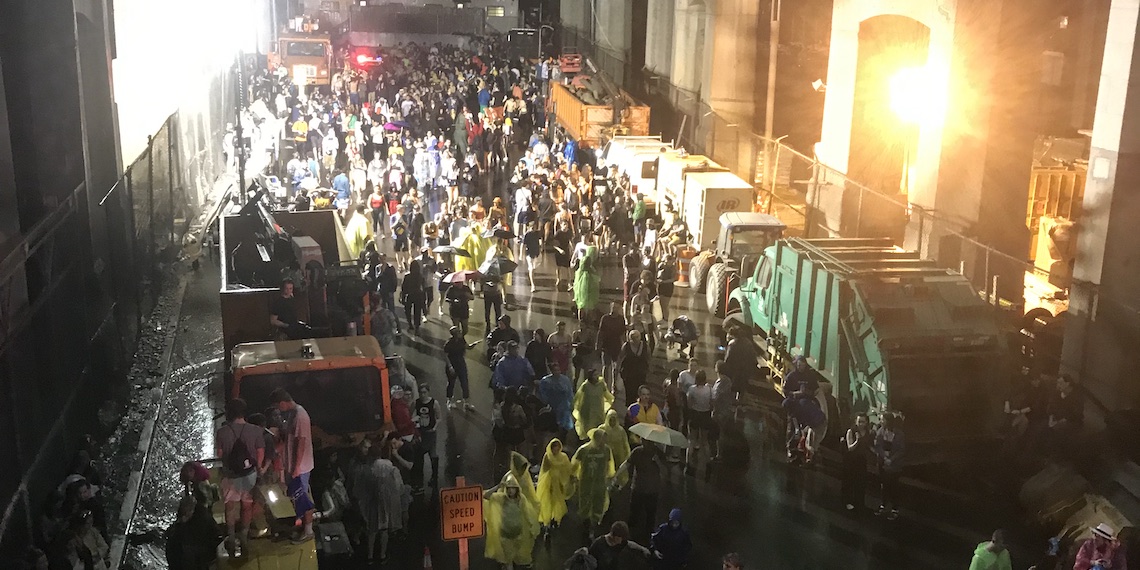 UPDATED: The Last Day Of Governors Ball Was A Total Sh*tshow

Anyone who’s ever put together even a halfway decent birthday party knows that event planning is a pain in the ass. There are always unexpected factors, and it’s difficult to make everyone happy. Multiply that scale to a large music festival, and things are bound to go wrong along the way. Even if a festival isn’t organized by sociopaths like Billy McFarland and Ja Rule, sh*t happens. Case in point: this year’s Governors Ball festival in New York City, which took place this past weekend.

Things ran smoothly for the first two days of the festival, but then on Sunday, everything went wrong. There was rain in the forecast for much of the afternoon and evening, calling the outdoor festival into question. On Sunday morning, the festival organizers announced that gates for the festival would be delayed until 6:30pm, a casual seven hours after the festival was supposed to open. The only problem? The weather on Sunday afternoon in NYC was literally beautiful. Like, at 2pm I willingly walked 30 blocks instead of taking the Subway because it was so nice outside.

People were understandably a little pissed that their festival day was being shortened because of “thunderstorms” while it was bright and sunny. I’m not sure what weather forecast the Governors Ball team was looking at, but apparently they were in a room without windows to just look outside. Either way, 6:30pm was the start time, and the performance schedule was moved around to still fit in as much as possible. Sets were shortened, things were pushed later, and everyone still made their way to Randall’s Island Park to enjoy what was left of Day 3.

But that was another problem. When the festival starts at 11:30 in the morning, people trickle in throughout the day. When the festival starts at 6:30pm, everyone shows up at 6:30pm. One of my roommates was at the festival yesterday, and she detailed her experience getting in: “We waited 40 minutes to get our will call tickets and another 45 to get into the actual festival. If they had just started the festival during the day, there would have been much better crowd control.” With shortened sets starting as early as 6:45, many fans were stuck in lines while their favorite artists were performing just a few hundred yards away. It was already a clusterf*ck, but the Gov Ball nightmare was just getting started.

At 9:35pm, Governors Ball posted the following message on their social media accounts, as well as on the screens at the festival. It still wasn’t actually raining yet, so people were both confused and annoyed. Most people at the festival had only gotten to see one set by the time the evacuation started, and the headliners for the day (The Strokes and SZA) never even got to go on.

It’s important to understand that Gov Ball doesn’t just take place in a park somewhere in NYC. It’s on Randall’s Island, a tiny little island in the middle of the river between Manhattan, Queens, and The Bronx. There’s no Subway stop on the island, so the only way to get back into the city is to take a bus or walk across the bridge. Predictably, things got bad quickly once the torrential downpour started. The initial round of shuttle buses was gone after a few minutes, so people took things into their own hands.

One person at the festival described her experience: “We tried to wait it out under a (leaking) tent but the crowd didn’t die down and neither did the rain, so we left and the shuttles were all gone so we joined the literal hoards crossing the bridge by foot.”

Yes, you read that right. Thousands of people were crossing the bridge back to Manhattan in the middle of a lightning storm BY FOOT. This truly looks like the scene after a major natural disaster.

Another festival-goer had a similarly awful experience:

“Everyone left at the same time so I knew it was going to be chaos. We were body to body walking through mud to get to the bridge. There was so much water that people’s shoes were coming off. When we got to the bridge, it was raining so hard that it felt like a kids water park where the bucket just dumps water on you. People were pushing and stopping to avoid the rain, so we kept pushing through to get over the bridge.”

Here’s a video of what it was like on the bridge:

One of the Gov Ball attendees also added that “there was no one directing anything. We just had to figure out how to get out.” To me, that’s the craziest part. Even if things are messy and overcrowded, how do they not have an actual plan for how to deal with a situation like this? You can’t just flash a giant sign telling people to proceed to the exit when the exit is just a bridge with no shuttle buses in sight.

Pretty quickly, the Governors Ball team announced that they would be issuing refunds for Sunday, which is obviously the right decision. It was clear why the festival got shut down when it did, but it seems like they majorly screwed up by delaying the start time so much. Even if the headliners wouldn’t have gone on, at least people could’ve seen like, two acts before the bad weather started.

Though this year’s Governors Ball will probably be remembered for the absolute sh*tshow that was Sunday evening, the other two days were actual pretty great. The highlight? Probably when Matty Healy, the lead singer of The 1975, called out Kendall Jenner and a bunch of influencers for walking in front of the stage.

For every thousand people that were stuck on that bridge, at least we got one excellent takedown of a Kardashian. It’s the little things. But this isn’t even the first time that Governors Ball has been messed up because of bad weather. Back in 2016, organizers canceled the third day of the festival, which was set to feature Kanye West as the headliner, and people were outraged. Ouch. If you’ve been personally victimized by the Governors Ball monsoon of 2019, feel free to drop your experience in the comments below, and make sure to cop that refund for your troubles. This is why I don’t go to music festivals!

UPDATE: Well, the Governors Ball organizers clearly got a lot of angry DMs, because on Monday night they put out a message from the founders on their website. In the message, they give a more detailed explanation of what went into their decisions on Sunday. Most importantly, they explained why the starting time for the festival was pushed back so far. At 8am, the team was told “that there was a high likelihood of thunderstorms and lightning throughout the afternoon, with 4pm-6pm being the most problematic and the most threatening.” At 11am, they got an updated forecast with the same information, and pushed back the gates to 6:30.

In the statement, they stick by their decision to push back the opening. “At around 5pm, the expected weather system did in fact come through the NYC area and hit Manhattan and Brooklyn with thunder, lightning and heavy rain. This weather was close enough to the festival site that we would have had to cancel and evacuate had it been a normally operating festival day.” Okay, so I live in Manhattan and I didn’t see any thunder, lightning, or heavy rain at 5pm, but maybe the storm didn’t hit my neighborhood. Who knows.

The founders acknowledge that the evacuation situation wasn’t ideal: “While we are happy that no injuries were reported during the evacuation, we aren’t going to sugar coat things here. When you are evacuating tens of thousands of people from any site, it is a challenging endeavor.” This is obviously true, but they didn’t really have anything to say for why the actual evacuation was such a dangerous free-for-all.

After reiterating that everyone will be getting refunds for Sunday, the message concludes with the announcement that the Governors Ball team will age doing a Reddit AMA this afternoon at 1pm. I have a feeling it’s going to involve a lot of angry Strokes fans, and probably some people trying to explain how weather works. If you want to follow along on Reddit, here’s the link, and please tell me if anything important happens.