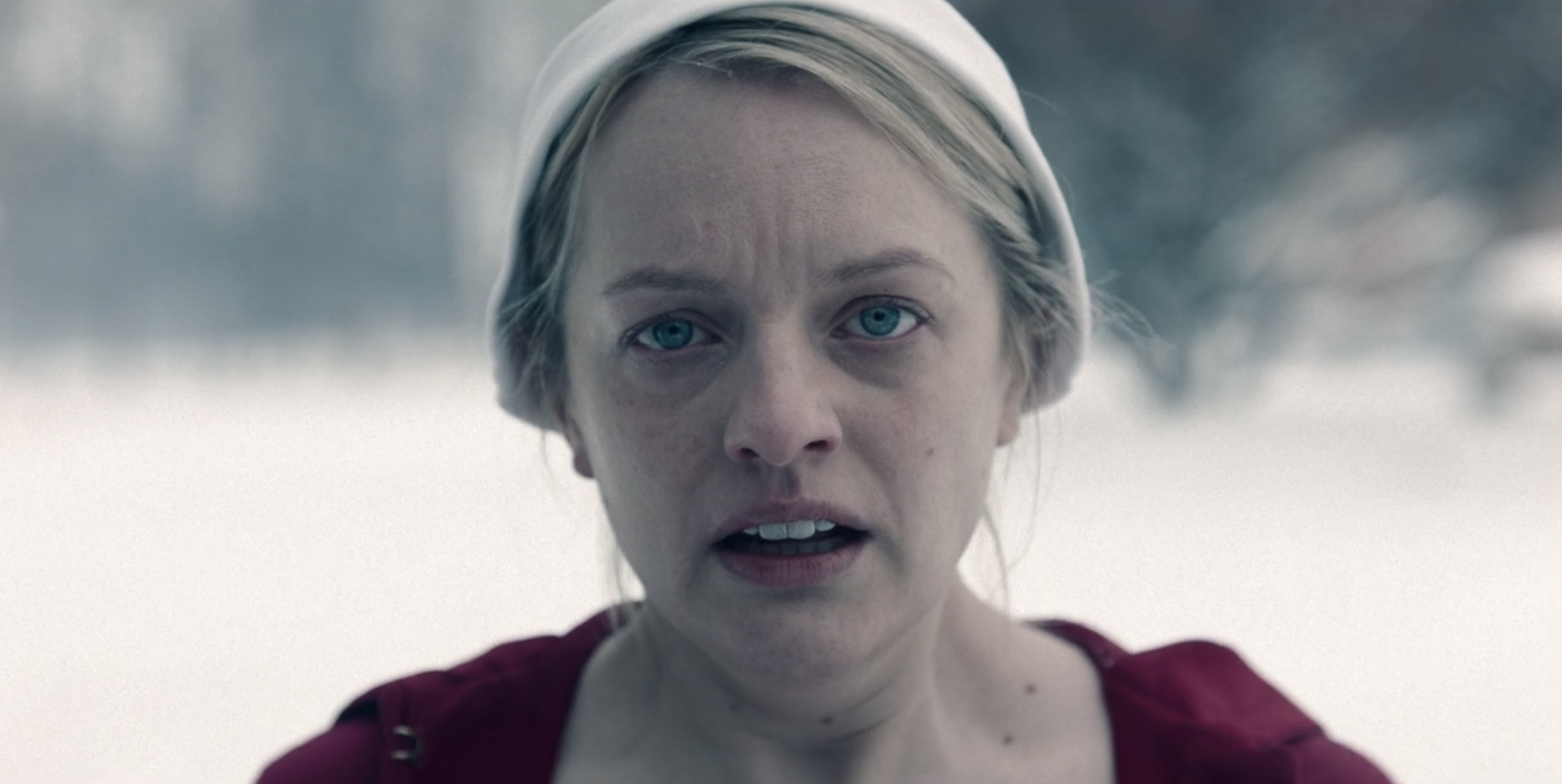 Offred Get Your Gun: ‘The Handmaid’s Tale’ Recap

First of all, I just want to say that we’re all insane for returning to this show after the horrors it visited upon us last week. The Handmaid’s Tale is the shitty ex who keeps cheating on us that we can’t stop going back to.

Hulu: Last week on Handmaid’s Tale…
Me: WE REMEMBER, THANKS.

Anyway, let’s get to the recap because maybe doing that will get the last episode out of my mind.

Offred And The No Good Very Bad Day

We open on…a wolf? June and the wolf make direct eye contact for a while and I’m like, are they gonna hook up? What is happening with this wolf? Is it a fucking Dire Wolf? Is it the Grim? Is it Offred’s godfather Sirius Black in disguise? The fantasy nerd in me is bubbling over with possibilities.

June ultimately breaks eye contact and walks away from the wolf, which doesn’t seem like how a wolf encounter should go but, whatever.

Offred: I’m sorry there’s so much pain in this story.
Me: APOLOGY NOT ACCEPTED!

This whole episode, June’s voiceover addresses us directly, as if to say “you are all handmaids trapped in Gilead,” to which I reply, “yah bitch I know have u seen what just happened with the Supreme Court?”

Offred hustles her pregnant ass inside and once again I must ask, wtf happened to this house? Why is it covered in sheets? The house was clearly abandoned for some reason, but why?

Me: Omg do they have bed bugs?

The house has a few useful things inside. Namely, some dusty old bottles of jam, an abundance of sheets, keys to a nearby car (!!!) and a creepy old doll house because, of course they do.

Is this a Handmaid’s Tale/Hereditary crossover episode? I wouldn’t put it past them…

Through some light snooping, we see that this is, in fact, the house that Hannah used to live in with her new family until they moved away, apparently without any of their belongings. I mean, I get leaving behind a few things for the new tenants to deal with, but this family left literally all their shit for someone else to clean up. What is this, me moving out of my college dorm?

I’m going combine some of these flashback because there were a lot of them and some were like 2 seconds long.

Moral of this flashback: Wow. Children and parents sure do hate to be separated.

Moral of this flashback: Isn’t it nice to have a baby? Parents love their babies.

June acquires car keys and decides it’s high time to GTFO (side note: this couple left THEIR CAR?!? HOW DID THEY LEAVE?!?).

It’s snowing like, a lot, which doesn’t make for great driving conditions especially if you’re a person who hasn’t driven in a while but, I guess skidding on some ice is better than birthing a girl in Gilead (it is).

June turns on the car and…omg it’s the radio!

Me: I hope this car has an aux cord. June deserves a fire playlist right now.

June gets to hear the news for the first time in forever. It’s hard to imagine being in a headspace where hearing a breaking news alert is anything but a complete nightmare, but okay.

The broadcast is coming from Little America and we know that because they keep referring to “the stars and stripes” and blasting Bruce Springsteen songs. Nice to know that my Uncle Tommy made it out of Gilead and is apparently running a radio station now. Good for him.

June is truly BUMPING this radio and I’m like, “girl I get it but you need to focus.”

She then realizes that she needs like, food and provisions before she can escape so she heads back into the house. She’s about to leave a second time when she realizes “Oh shit, I’m still dressed as a handmaid. Should probs change that.”

TBH June leaves only to realize she left shit in the house so many times this episode I highly suspect she waked-and-baked. That kind of thing always happens when you wake and bake. (Not that I know from experience.)

Well, well, well, if it isn’t Mr. and Mrs. Rapemonster. Who the fuck invited you?

June is upstairs trying to figure out what to wear for her big escape (someone might take pics!!) when low and behold Serena Joy and Fred pull up to the driveway. They’re fighting, as you’d imagine any couple that just conspired to rape someone into giving birth only to lose track of her completely might.

Mr. Waterford seems genuinely shocked to find out the June doesn’t like him. He’s like, the worst version of a guy at the bar who buys you a drink and then gets pissed you don’t immediately blow him. He’s basically like if that guy was in charge of the government.

Serena Joy: You raped her yesterday!
Fred: It was your idea!

Umm yeah “it was your idea!” works as an excuse when you’re trying to figure out why you and your friend agreed to take multiple shots with finance bros last night, not when you’re talking about why you raped somebody.

Serena Joy finally says what we’ve all been wanting to say to Mr. Waterford since episode one, “YOU’RE A FUCKING IDIOT.”

Basically, the Waterfords are in a precarious position because June already ran away once, and if they lose her again Gilead is going to be pissed. You know what they say: Lose your handmaid once, shame on her. Lose your handmaid twice, the government will come to your house and kill you.

Serena Joy is having a full on mental breakdown, screaming “I HAVE NOTHING” and crying. And to think, she could have been in Hawaii by now pregnant by that guy who smokes inside.

While the Waterfords discuss their potential future death, they don’t realize that death is actually like, a few feet away because JUNE FOUND A GODDAMN GUN. And suddenly, I stan the Second Amendment.

Offred shits the bed on killing the Waterfords, which is probably good for the plot but not so much my mental state. I guess she didn’t want to murder someone on the eve of her child’s birth. Lame.

Flashback 3: June and her mom having an awkward convo. Her mom says she’s going to be there for June’s birth, and June is like, “Uh yeah you said that about my fifth birthday party and we all know how that turned out.”

Moira is also there, and is literally me throughout this entire scene.

June: Mom you always flake on important events and it is deeply hurtful to me.
Mom: What? No! This time is different.
Moira (sensing the tension): MY FRIEND GAVE BIRTH IN A STREAM FOR YOUTUBE!!!

The moral of this flashback: June’s given birth without her mama once, and she can do it again.

Finally, June gets in the car and is ready to go when – womp womp – the goddamn garage door won’t open. She tries to do the most logical thing (i.e ramming her car into the door at full speed screaming “MOTHERFUCKER” against the roar of the engine) but to no avail.

Aaaaaand the wolf is back. This wolf has a serious staring problem. Either eat someone or move along. This shit is rude.

So like, at this point I’m thinking this wolf isn’t even real? Like it’s just some kind of manifestation of Offred’s inner will to survive?

(Brb, let me send that assessment to my 11th grade English teacher with the note “WHO LACKS ANALYSIS SKILLS NOW BEYOTCH?!?”)

Offred is literally giving birth and shoveling snow right now. She’s doing chores that I, a non-pregnant, non-enslaved person would never dream of doing. Good for her.

As I’ve explained to my dad many times, shoveling doesn’t do shit.

Time to give birth the baby alone inside a house with no electricity and like, one jar of jam. At least they have all those goddamn sheets.

Flashback 4: The birth of Hannah. Moira is actually there, which seems odd to me. Like, I love my besties, but I don’t think I want any of them to see my giant vagina spit out a baby. That’s a little much.

Also wtf is Moira wearing to the birth? I couldn’t get a good screenshot because Hulu is impossible (call your Senator) but did she just come off a shoot modeling for Modcloth? I’m confused.

Moira: Are you sure you wanna hand Luke the birth aux cord? His taste is kind of wack…
June: Omg no he’s my husband I love him I love his taste in music.

**Luke plays one second of a song**

June: On second thought we’re getting a divorce.

The moral of this flashback: Giving birth is more fun with friends.

In a last ditch effort to get herself some birth company, June plops down in the snow and fires off a couple rounds into the sky. For the first time in Gilead history, nobody is listening.

June acquires firewood and gets ready to shit out a baby in an abandoned house. We’ll skate by the fact that like, it makes no sense that she found dry firewood and a match to light it all in this space but whatever.

And now we get to the actual birth, which is interspersed with memories of herself actually pushing for Hannah, going through pushing practice orchestrated by Aunt Lydia, and the birth of Janine’s baby.

Then…out of nowhere…the baby just slides out! Where is the placenta??? How will she cut the umbilical cord??? These are questions I have.

Once the birth is done June just wraps herself and the baby up in a little blanket which, again, seems unwise since she still has to wait for the afterbirth, but whatever. For a show that usually does not shy away from blood or bodily fluids, this birth was very, very clean.

Speaking of placenta, this is the one situation in which I totally would not shade Offred for eating hers. Get those nutrients girl! Be that wolf!

We end again on June’s voiceover addressing us directly, which I find to be unnerving. Focus on yourself June, you’ve got a wild road ahead.