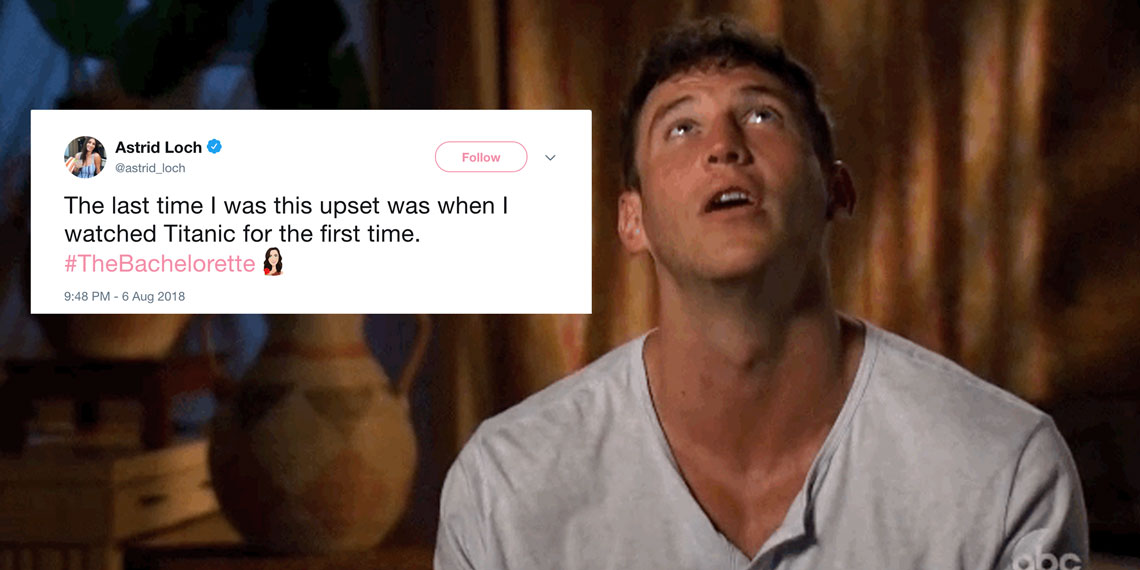 The Funniest & Most Accurate Tweets About ‘The Bachelorette’ Season Finale

It’s safe to say that this season of The Bachelorette has been a wild ride from the start for all Bachelorette fans. We were introduced to some interesting men—some with poor social media etiquette, others with literal sex crime convictions—and then  impatiently chewed on our nails simultaneously watching Becca as she presented her final rose. Even though most of us read the spoilers and knew who she was going to propose to nine weeks ago. So why do we do it? For the tweets, obviously. And our recap. But mostly the tweets. My favorite time to be on Twitter is Monday night during The Bachelorette, so obviously I was furiously refreshing my feed last night during The Bachelorette finale.

Without fail, Bachelor Nation had opinions and jokes about every aspect of the finale. During Becca’s decision between Blake and Garrett, Bachelorette fans were on top of it. We’ve collected some of the funniest, most dramatic, and intense tweets from Bachelorette fans during the episode to understand everyone’s shared pain.

Becca always thinking ‘it was going to be Blake’ and now choosing Garrett is #TheBachelorette   equivalent of changing your answer at the last minute on a multiple choice test.

9/10 times you were right the first time! pic.twitter.com/qkX8w77pgL

The last time I was this upset was when I watched Titanic for the first time. #TheBachelorette

Blake and Jack both deserved better than what they got.

I never thought about it that way, but holy sh*t.

Me: No please god no. NOOOOO!

*Ahem* Wills for Bachelor. That is all.

Blake: “I’m attracted to how independent and strong she is”

Garrett: “I like the way she says bag”#actualquotes #thebachelorette

Blake aced his interview… and then there was Garrett.

“Things were so great between us that it made it hard for me to talk with other guys” #theBachelorette pic.twitter.com/kjofKrcn2Z

Um… I think that’s the point…?

Becca: you were so solid, and I knew it was gonna be you

Blake: Will you marry me?

Ok, I’m still mentally rehabilitating myself. But at least after that depressing episode we have more to look forward to. Bachelor in Paradise starts tonight, because ABC does not want me to ever be able to go to sleep at a normal hour, apparently. So if you’ll excuse me, I need to stock up on hard alcohol for this sh*t show.