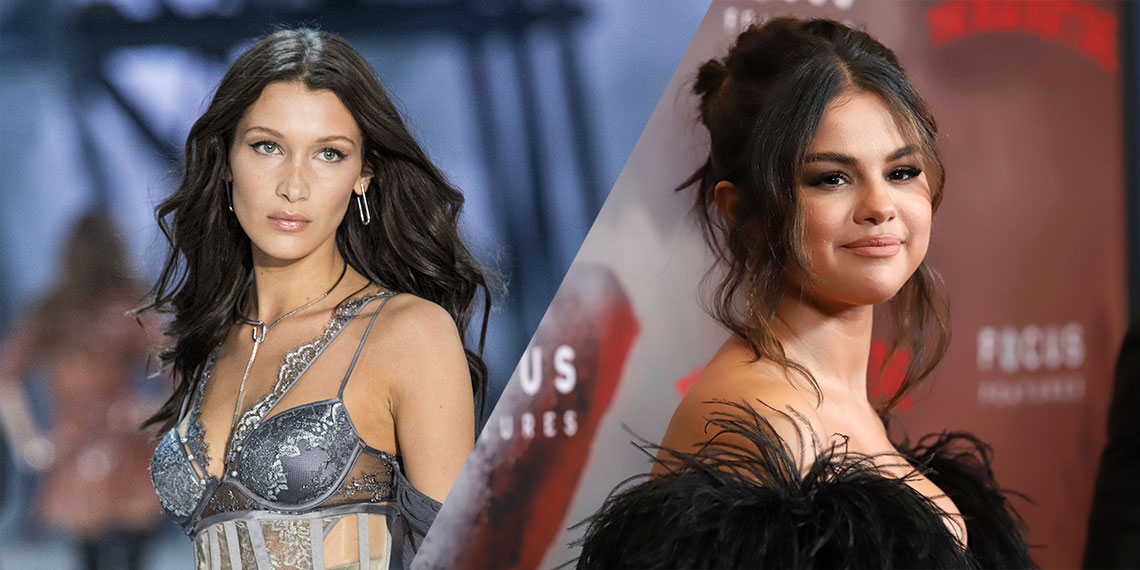 Sometimes, celebrity feuds are messy, knock-down, drag-out wars. Other times, they’re so subtle that you almost miss them completely. This latest bit of drama between Selena Gomez and Bella Hadid falls into the latter camp, with the feud being so subtle I almost couldn’t figure out WTF was going on at first. That’s because it involved an Instagram follow, a comment, and a dirty delete. Grab your microscopes, everybody, because this sh*t that went down between Selena Gomez and Bella Hadid on Instagram is what we in the business call “minute and inconsequential.” But I’ve got nothing to do today (that’s a lie), so I’ll explain this entire scenario. As for why you should care about it, I’m sorry, I can’t explain that.

In order to understand why anyone would even take note of what Selena Gomez may or may not comment on Bella Hadid’s Instagram, you first have to understand the history of their friendship. Or, I guess I should say, lack thereof. Sources tell InTouch that Selena Gomez and Bella Hadid were never really friends per se, but they obviously knew of each other because they both A) are super famous and B) dated The Weeknd. Hating your boyfriend’s ex, simply because she used to date him? It’s a tale as old as time. In January 2017, when Bella learned that Selena was dating The Weeknd, she unfollowed her on Instagram. In March 2017, Selena and The Weeknd both unfollowed Bella Hadid in turn, which really has got to make me wonder what those two did for fun during their relationship. Like, they really sat around and mutually decided to unfollow Abel’s ex on Instagram? Couldn’t you just like, go for a walk instead?

But things seemed to have cooled down between Selena Gomez and Bella Hadid in May, when Bella liked an Instagram picture of Selena. I know, I know, this is all so stupid, why do I waste my time thinking about these people? I can’t say. It’s an asinine job, but somebody’s got to do it.

Well, the cold war between Bella and Selena started up again last night, when Bella posted a picture of herself. Selena Gomez commented “stunning” with the heart eyes emoji, and the next thing we knew, Bella deleted the pic. Fans quickly speculated that she deleted the photo because Selena had commented on it. While certainly possible, that would be extremely weird. If anything, wouldn’t you just delete Selena’s comment? Maybe the post just wasn’t getting good engagement… or maybe Bella didn’t realize Instagram is taking away likes. Or maybe she really is that bizarrely petty. I don’t know the girl, so I can’t say! (If it were me, then you could definitely say she’s just that bizarrely petty.)

This all became actual news when a Selena Gomez fan account posted Bella’s then-deleted picture and called attention to the dirty delete, writing, “She’s all about supporting women. You all just can’t take it nicely. Btw Ms Hadid deleted the post.” Or, put in a way that makes actual sense that you don’t have to re-read three times, “Selena Gomez is all about supporting women, Bella Hadid just can’t take a compliment and deleted the post.” Or maybe “you all” refers to people who may have commented on Selena’s initial comment? It’s hard to tell, and we’ll never know now that the original post with the comment has been deleted.

Selena Gomez commented “That sucks” with a sad face, and that’s it. That’s the drama. Selena Gomez tried to comment something nice on one of Bella Hadid’s Instagrams, so Bella responded by deleting the entire post. Lmao. I kind of love the ruthlessness of it all. It’s like, “my enemy commented on my post, so I’m gonna throw the whole post away—that will teach her to compliment me!” What a ridiculous power move.

UPDATE: It seems like I was probably right, and Bella Hadid didn’t delete her photo just because Selena Gomez commented on it. In a new Instagram caption (god, why can’t these people just release a statement through their publicist), Selena put the rumors to rest… sort of. In a comment on a pic Elle posted about the not-feud feud, Selena said, “NO. I shouldn’t of spoken without knowing the truth. I’m sorry. Please don’t be hurtful. She is a wonderful person and it is all a misunderstanding.”

Soooo I was probably right in that Bella deleted the original picture because it got bad engagement, or maybe she didn’t have the rights to post it, or something. Probably completely unrelated to Selena Gomez. Well, this has been a fun exercise in jumping to conclusions! Now, if you need me, I need to figure out what it means when Instagram said 15 minutes ago that someone was online two hours ago, and now it jumped to two days ago.