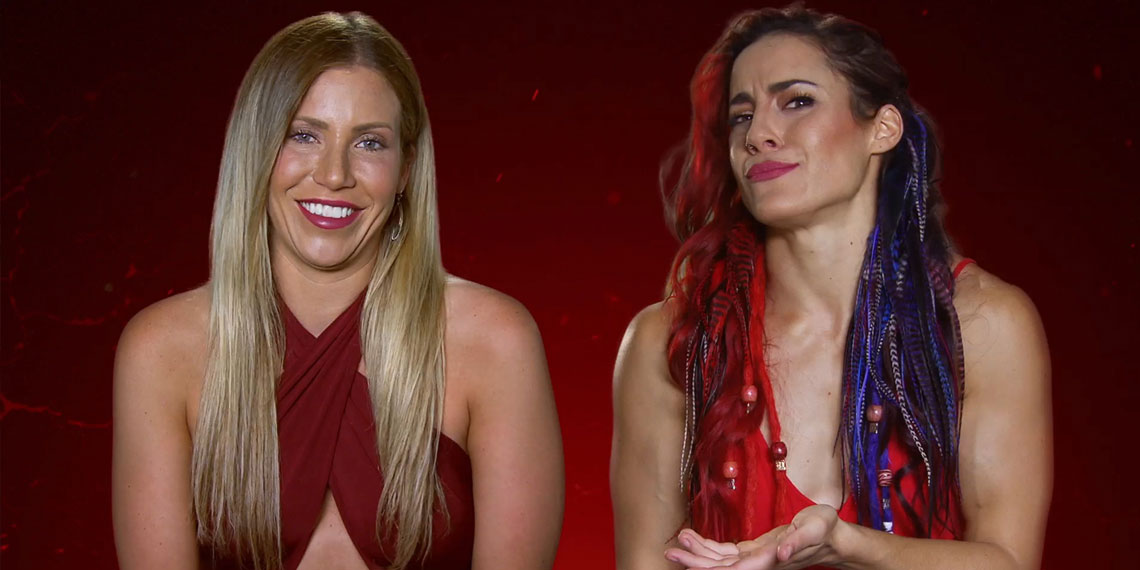 The episode begins in my favorite room of the Challenge house: my own. We get a quick glimpse into the Queen’s quarters before quickly recapping last week. If you missed it: Shane did a lot of unwarranted politicking for Team Big Brother, and after his efforts went unappreciated by Davonne, he called her a b*tch and declared war.

This week, we pick up right where we left off in the midst of #ShaDays fight. Nelson doesn’t understand why Shane called a woman a b*tch because he’s V respectful… but I’ve personally been called a b*tch by Nelson multiple times… and vice-versa…. So there’s that.

We head to Armageddon with little idea as to who is going in because of all the nomination confusion. (Well, you’re clueless. We all knew, once nominations would finish up, we’d all scurry around the house counting votes like bookies.) TJ reveals that Tori/Derrick received the most votes and Tori is PISSED. Cara, NOT MARIE, told Tori our team would vote for Angela/Faith. With half of our matchup revealed, the lights perk up and show Brad/Kyle, Angela/Faith, and SLOSS are Torick’s options to compete against. Kyle is confident he and Brad will fare well if called down (hard eye roll) and Angela/Faith/myself are shocked when Torrick chooses SLOSS. Some people like to take the road less traveled (Tori) and others (ME) like to take whatever shortcut/easy option is most easily accessible. To each their own, I say!

Long story short, Sylvia and Joss win, but not before a handful of cast members knock Derrick one last time. Tori isn’t afraid of Redemption because the last time there was a redemption, her new boo Jordan won the entire show. Well Tori, you’re with your old boo D-rock here, so good luck!

At the redemption house, everyone is shocked to see Tori/Derrick walk in. Tori explains everyone is playing a “scared” game, and my girl Cara is getting a lot of grief from her “allies.” See Cara, they don’t like you either. Quick note on the whole “scared” game thing: When there’s a million dollars on the line (or a weekly paycheck) eliminations ARE scary. If you lose in an elimination… you’re eliminated (or on this season) sent to Boot Camp with CT and Paulie. Two options I have no interest in.

Back at the main house, the Bad Girls can’t believe they’re still in the game, and I basically name the entire house as my “friend alliance.” I can’t help it that I’m popular! Kam lets us know she has a plan and that it involves her being more badass than any Challenge guy, ever. Tony lets us know he ONLY has Brad/Kyle, Amanda/Zach and oh yeah, Johnny as a partner. BOO F*CKING HOO, TONY.

We head off to our next challenge, and today’s game is “dig deep.” I silently pray there will be coffins involved again. This challenge will be played in two teams, but only one pair on the winning team will win. Get it? Amanda and Zach get to pick which team they want to play on and they chose the side with two male/male teams. I understand. I don’t dig, nor do I use my mind often… good choice.

The challenge begins, and I am not amused. My plan was to stand as close to the sand wall as possible to try and blend in with hopes I can claw my way out when necessary. In the other shaft, Brad has taken the role as leader and Kyle as cheerleader. Brad’s “Oh my gods” give me life, and Kyle needs EVERYONE TO STAY CALM.

Kam and Shane put their heads together and are able to finish their puzzle while my team is knocking blocks together like 2-year-old children. Cara of course completes the hardest puzzle and I’m happy she’s my partner. I don’t love Cara, BUT I do love Cara the competitor.

Kayleigh and Kam run for the finish line and beat their entire team there. GIRL POWER!! The camera pans to a shot of me climbing out of the shaft with Tony and Johnny’s help, but this is not true. We shot this after the challenge was over with Drone—Johnny and Tony were shoving me back into the shaft. D*cks.

TJ congratulates Kay/Kam on their win, and they immediately let us know they have a team in mind to cast their power vote on. The face I make says it all.. Oh word? WHAT IS KAM’S PLAN?! I HATE SECRETS. Either way, the rookies are SHOOK.

At home, Kam wants to use her vote to save people? Since we’re all so scared to go in, Kam lets us know she is either voting SLOSS or Kyle/Brad with the idea that no one else will risk voting them. This team huddle happened post-bar, so I was truly upset and CONFUSED. Kam is brilliant and Sylvia is a great cryer.

*** Also: NONE OF YOU ARE MY FRIENDS! WHY DID NO ONE TELL ME TO PUT BAGGIER CLOTHES ON OR STAND UP STRAIGHT?! TRUST. NO ONE. B*tches will love to see you fat.

Kam sells her plan like NOBODY ELSE as we all scramble to figure out our votes. Bet you’re all calling her Queen Kam now!! The rookies decide to burn on each other because, well, that was their only option. The rest of us had already locked ours down. Nominations goes as follows and Kams plan seems to have no flaws… kind of like her skin. (Mind you, I am still clueless that a plan existed.)

After nominations Kam’s plan is revealed and I am dumbfounded. I am also kind of pissed off that I was basically the only person not allowed in on the plan, but Cara was right: don’t ever tell me a secret in a challenge house… or ever.

Listening in, Angela and Jozea learn their fate and warn that one of the rookie teams WILL be coming back to this house tonight. Angela calls us weak mentally and physically and OF COURSE the camera pans to me. I am OKAY with this. Fortunately, my arch made me look much skinnier than 2 commercials ago. Either way, rookies are pissed.. and KAM IS STILL QUEEN.

At Armageddon, Faith and Angela get the most votes with Kam/Kay placing their power vote with them. Since they burned on Big Brother, this rookie alliance is about to come head to head. BUT WAIT—TJ ALSO HAS A PLAN. This season, mercenaries are back… and this time, they take our spot.

Queue the slow-mo entrance and in walks Ashley and Hunter. Ashley reminds us she won the last show she was on, but we can already tell by her weave. GIRL LOOKS GOOD!!

We end right before the elimination begins… but I think this episode gave us everything we wanted….. AND #TYB. I CANNOT WAIT FOR NEXT WEEK. Leave comments below! I need to know if you’re as excited as I am!!!