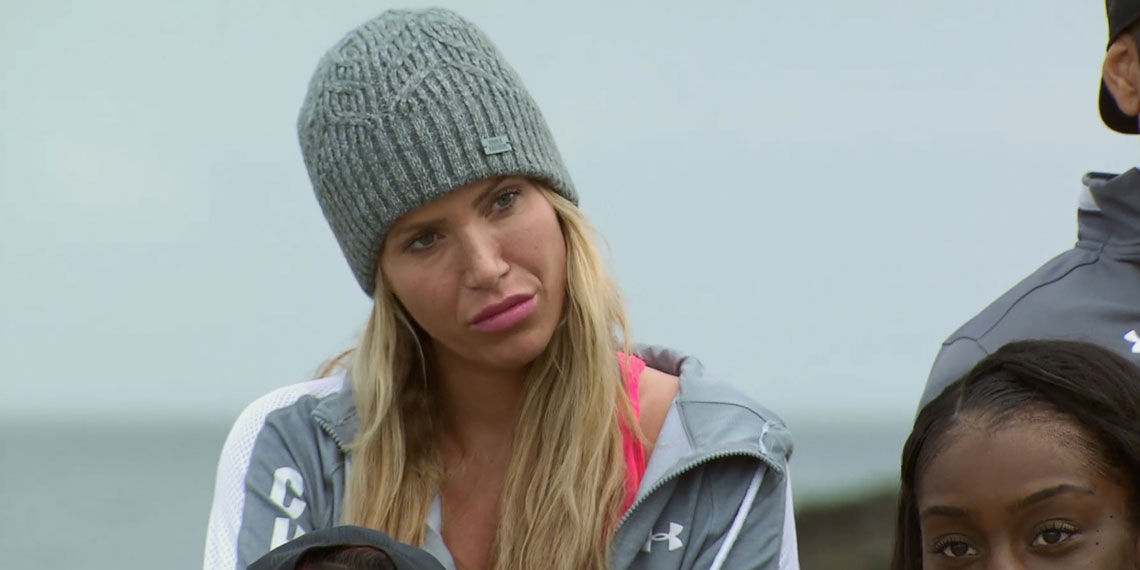 Hey All! Marie again to give you The Challenge: Final Reckoning episode 5 recap. Rewinding quickly to last week: Jozea/Davonne made it to the big house by beating PaNatlie (Fear not, Big Brother fans—the losers of the redemption challenge… just go back to Redemption house) but before returning, Paulie let Brad know that Britni cannot be trusted. Paul claims Britni was was doing the dirty with her ex Chuck, and Brad is upset. As viewers, we know this didn’t happen, since DUH, MTV would have shown it. So in short: Paulie is messy, and we love it.

Brad and Kyle are having a pow-wow in the kitchen about their mutual distaste for Paulie’s antics. Kyle thinks the Britni lie will make Brad unstable, but the truth is you’re both unstable. We all are, that’s why we’re here. This is where we get my favorite part of the episode, without watching the rest of the episode. Brad suggests on national television to “SEND LETTERS TO THE LAWYERS, IF HE WANTS IT THAT BAD, FIND A PROMOTER!”

*** SOMEONE FIND A PROMOTER I NEED THIS, AND THE ROAD FILMED TRAVELING TO IT!!! PAULIE VS. BRAD. I AM SCREAMING!!! I’m starting a petition immediately.

We head over to another perfect match scene with BanAngela. Johnny plays the super “victim”  letting us know that being with him is “a death sentence.” This makes me giggle as the first thing that came to mind was a quote from one of my all-time favorite movies, Mean Girls. “Don’t have sex, because you will get pregnant and die!” Run Angela, RUN! He’s not talking about the game!

The next day, the real question is “DO YOU WORK OUT?” I love this scene. It’s fun. It almost makes me wish I agreed to work out ever… almost. At the gym we get a glimpse at what Joss’s personal fitness sessions are like, and I’m having an anxiety attack imagining I was in Sylvia’s position. Sylvia says, “Joss can’t just stand there looking pretty,” and then Joss immediately reminds us, in an adorable interview about how he works out a lot, that yes, yes he can just stand there and look pretty. In fact, he can sit, lay, climb, swim, get naked, whatever he wants, all while looking pretty. I think we can all agree that we’re all here for more SLOSS!

Outside on the balcony, CT is complaining again that he has Veronica as a partner, and it’s getting old. There’s clearly a history here between them since they’re both legends in the Challenge franchise. You’ve been DADDing for the last few years so they had to dig deep to find a vendetta. You’re lucky to have V, and so are we. I too, say yes to the gym when I feel like it. Unfortunately, I just never feel like it. We get you, V. Getting there is the hardest part! I say no to the gym and yes to wine all the time. Too each their own, CT! Let Veronica live.

It’s a beautiful day for flexing outside as we get a serious moment of Brad questioning Jozea about what really happened in the Redemption house. Brad lets us know he’s trying to process the Britni situation, as well as the pre-workout he just chugged. Jozea tells Brad that Britni’s actions with Chuck would be grounds for termination if she was his girlfriend. I’m pretty sure Jozea doesn’t swing that way, so you may want a  second opinion on that, Brad. What you really need is a Xanax and a phone call with Brit.

Faith and Nelson find themselves alone talking about Kayleigh/Nelson. Important note: Kayleigh is in very close proximity to this interaction. This is where Nelson is doing it WRONG. He knew Kayleigh was interested in his relationship with Faith, and he chose to sit outside with her alone while Kayleigh was right down below. I get you, Kayleigh. I’d be bothered. If you say you wouldn’t, you’re lying. Faith lets us know that she can tell Nelson is sexually frustrated, and so can I as he adjusts himself at the end of the scene.

Rookies have a team huddle and let us know (with more than one confessional worth) that rookies need to stick together. Great idea. Do bears also sh*t in the woods? This isn’t some new brilliant concept, people, the term “fresh meat” exists for a reason. All five rookies have made an impact on he show thus far, and I can’t say that I hate it (although I really want to hate it). Now that the Bad Girls have teamed up with Big Brother and BanAngela is a thing, does this make them an alliance? Like Bananas whimpered earlier, a connection to him is a death sentence, so will this be fruitful? #punintended

We follow Davonne downstairs where she is telling myself, Cara, and Tori that they have some secret information from the Redemption house footage, and we are freaking out. I remember running through my head who I talked sh*t about, and it was mostly Cara. Hopefully I’m in the clear. Day had all of us truly thinking they had some Big Brother type feeds in the Redemption house. She’s HILARIOUS and smart.

We get to the Challenge, and TJ tells us it’s a purge. This means whoever loses goes directly into the Redemption house with the other losers, Paulie and Natalie. I hate these challenges. The name of the game for me, and everyone else really, is “don’t finish last.” BTW this whole challenge is complete BS and don’t give me that “but aren’t you a feminist” sh*t. Yes, I am a female, at a disadvantages to my male counterparts based on size alone. Bullsh*t.

Joss/Sylvia Vs. Zach/Amanda: Joss leaves Sylvia behind, and she falls early. Joss is hoping someone recorded that so he can put it on his next Insta story. #fitness Zach surprises everyone and doesn’t complete this obstacle course that seems built for him, but his partner Amanda does. Joss and Amanda celebrate their accomplishment with a kiss, while their partners fall hard in a different type of way.

Kyle/Brad Vs. Veronica/CT: Kyle and Brad get on and off the meat like they’ve done it before. Hehe. Being a guy/guy team was def a significant advantage here just based on the body length difference, and we see that with Veronica. There was a worthy distance from meat to meat, and Veronica was just too small. This had nothing to do with her love of wine. Swinging meat to meat was hard, and that’s why I’m a one meat type of girl.

Jozea/Davonne Vs. Angela/Faith: CT knows he’s in last place so he’s trying to get in the heads of these two teams. He as fails both teams got the one meat they need to keep him there. Johnny makes a comment about Jozea’s 2k swimming lesson and that he still swims like he’s drowning. This is the first time Johnny has made me smirk in a while.

Bananas/Tony Vs. Shane Nelson: Nelson has two left feet and falls short of the finish line. Shane completes the course with a celebration dance that I rewinded and replayed twice. Work it, Shane! Johnny lets Tony be a big boy and go first because he’s willing to share the spotlight. Vomit. I’m rotting for Bananas/Tony hard here. What they’ve failed to leave out of all the drama they’ve been showing is how much my partner Cara is not only creeping Kyle out, but the entire house. We are not in good standing with Kyle at ALL. Them winning is not good for us.

Kam/Kay Vs. Cara/Marie: Neither of us make it far as a team. I do get one rope, though, so we are okay. For all of you saying, “well some people got across without their partner’s help”—look at those certain people’s weight-to-body ratio. My lower half is WAY larger than my top. Pull-ups are legit the hardest thing ever. Don’t @ me. My ability to get to the next rope was contingent on my partner (and the plan that we made) to swing it back to me once she passed it. Cara went too far and couldn’t get back to help me, hence why Amanda notes we don’t work well together. Chill, people. Are any of you that surprised?

Regardless, poor showing.  Kay/Kam fall too but Nelson is SUPER proud of Kayleigh. True love in the making, folks.

Derrick/Tori: Derrick proves once again he has no athletic bone in his body. Tori flicking him off as she’s forced to fall because of his performance is everything. It’s the little things that count.

Tj tells us “two teams killed it” and there’s no need to guess who. This significant advantage is going to either Kyle/Brad or Johnny/Tony, aka the only two teams to finish the challenge. This is perfect because having a male/male team isn’t already a significant advantage! Not. CT and Veronica get sent to Redemption, and CT is pissed. Veronica looks absolutely stunning this entire episode, and TBH she’s already winning simply because of that. Pipe down CT, you’re not out.. you’re on vacation like Veronica has been trying to explain this whole time.

At Redemption, CT is still pissed. Paulie is secretly freaking out because CT is in the building and maybe he could get an autograph. I agree with Veronica that he needs to let it go. I don’t like how CT is speaking to Veronica, but I DO LOVE that she’s drinking wine while he essentially yells at her for doing so the entire time. #TEAMV

Back at the house it’s our first night out. This is really big for us; we hardly get to go out. When we go out we’re allowed to control our own liquor intake… and that’s why things always get messy. In life, most of us need babysitters aka Production Assistants, so expect drama.

Johnny and Tori talk sh*t about Britni, which I’m sure she’ll be upset about because she’s truly convinced herself no one sees through the cutesy girl act. Johnny and Tony have a heart-to-heart about how they hurt each other. Tony had to do what he had to do Johnny. Stop playing the victim like you SO LOVE TO CALL EVERYONE else.

Kayleigh notices Nelson’s friendliness to Faith, and PROPS to production with the red eyes. Hilarious. Back at the house, Kayleigh is still fuming, and tells Nelson to get out of her room. Nelson and Kayleigh liking each other truly just depends on the weather. This will be chaotic and also V dramatic. Do you think they’ll make it as a couple? (Don’t check Twitter.)

– The Brad moment talking about buying Britni a birthday necklace was adorable. So innocent. I like Britless Brad on the show.

– We get teased with a FaceTime of Bradni mid-episode and they leave us on a cliffhanger with it?! WTF.

– The one part of the episode I’m in has the song “Life of the Party” playing. Just saying.

Stay tuned next week at 9/8c on MTV. Next week looks HYPE!!!!! Once this season gets going, it’s never. going. to. stop. I CANNOT WAIT!