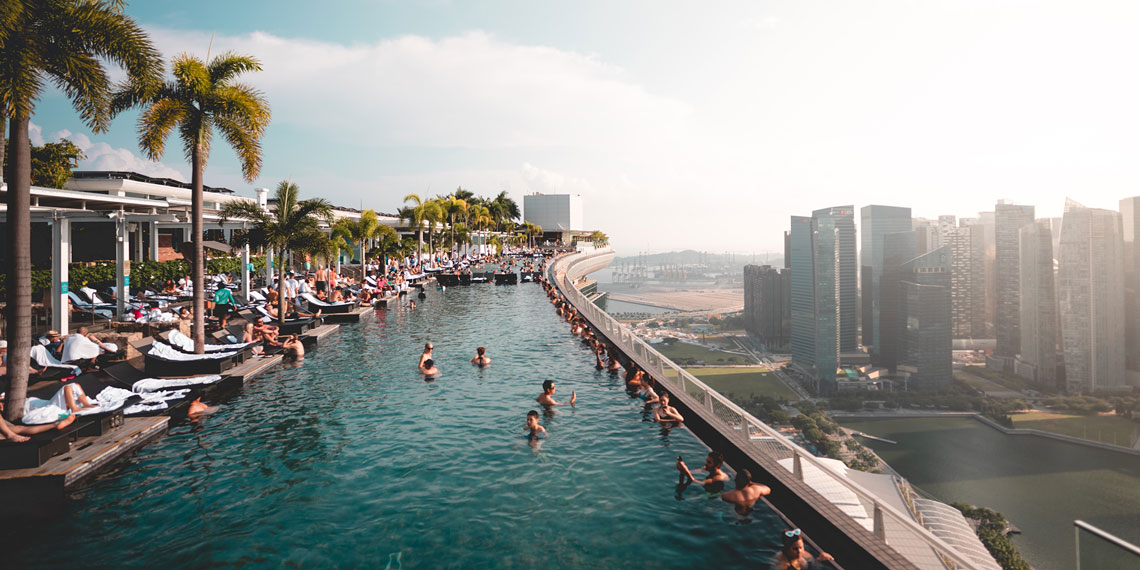 A lot of people have been asking if I could share my vacation itinerary from Singapore and Vietnam, and since I find myself awake at 2am with jet lag for the fifteenth night in a row, here it is.

First of all, I would be lying if I said that Crazy Rich Asians didn’t have a strong influence on my desire to take this vacation. It turned out to be really nothing like the movie, but it ended up being great for many reasons: one is that I didn’t feel a need to wear makeup once, another that it’s perfectly acceptable—no, expected—to eat fried spring rolls for breakfast.

Our first two days were in Singapore, which overall felt like NYC with a slightly more collectivist attitude. We had a great time, but my main observation of Singapore is that I would definitely not describe it as authentic or chill. Much of the experience felt like a very faraway version of America or a real-life version of The Good Place (which is how a Betches fan described it to me over DM and I think she was absolutely right).

Vietnam was the complete opposite of that. If Singapore is a country built around tourism, Vietnam is building tourism around the country. There’s such a strong culture and wide variety of terrains and history that made it really incredible. The reason we chose it is because we were looking for somewhere in Southeast Asia that was developed enough to comfortably travel through but not yet ruined by Instagram (cough Thailand).

For the Vietnam leg of our trip we used a company called Tonkin Travel, which I found on Trip Advisor and was honestly a bit shocked by how flawless its reviews were. While the trip definitely had some hiccups that you’ll read about, they weren’t really in the company’s control, and they seemed to do their best to rectify them. This is not an ad for them, but in general I would highly recommend using a travel agency to manage your trip, especially if you’re doing more than just stopping in Hanoi. We paid them a flat fee which included hotels, transportation and driver, tour guides and activities, and several meals.

Flight lands around 7am. Check into the Marina Bay Sands Hotel.

A stay at the Marina Bay Sands is well worth it and was a highlight of Singapore for me. Before we arrived I was a little worried this wouldn’t be the case, as the sheer size and social media attention around it made me concerned it might be like a Vegas hotel or something similarly hyped and overpriced. The room rate wasn’t insane (a little under $400), the amenities and services were very good, and the rooftop infinity pool overlooking the city is not overrated. It was clean and not overcrowded at all, likely because you can’t get in unless you’re a guest of the hotel. Like most things in Singapore, this is a very *strict* pool, and they make every person scan their room key before entering and exiting. Prepare for a single iced coffee on the rooftop to run you about $9 (although it’s one of the better iced coffees I’ve had outside America).

The hotel is also a massive hub of restaurants, nightclubs, and a shopping mall, and pretty much everything is an outpost of an American place. Clubs include Marquee, Lavo, Avenue, and the restaurants run the gamut from Black Tap to Spago, many of which are attached to celebrity chefs like Wolfgang Puck and Daniel Boulud. You get the idea.

In the afternoon we went to the Gardens by the Bay, which are conveniently attached to the Marina Bay Sands via a skybridge. This is where the wedding from Crazy Rich Asians was filmed, and features massive manmade “super trees”, which are less trees and more giant tree-like structures. It’s an indoor/outdoor space, and there are giant domes with floral installments and a huge indoor waterfall. We went to the Gardens both during the day and at night when it was all lit up, and they have a nightly 15-minute light show at 7:45 and 8:45pm. The show on the night we went happened to be sponsored by Toy Story 4, and that was the moment I realized that Singapore is Epcot.

We had dinner at Lau Pa Sat, one of Singapore’s famous hawker centers. This was the one that was recommended most to us. The hawker centers are basically giant food courts, named after all the people trying to hawk their food at you. They have a ton of stations with all different types of Asian foods. It’s a cheap meal and this was probably the most authentic-feeling aspect of Singapore. Just a warning that they charge you for toilet paper in the bathrooms, and there are no napkins at any of the food places, so BYON.

Spent the day at Tanjong Beach Club on Sentosa Island. Sentosa Island is an area of Singapore with manmade beaches and resorts, about 20 minutes from downtown Singapore. More Epcot vibes. According to Google, Tanjong seemed to be the most established beach club, and it was fine, but the beach definitely felt manmade. It was fun, but I wish we’d been there on a weekend when they have day parties. Email them to book a daybed in advance; it doesn’t cost anything but there’s a $50 minimum spend on food and drinks, which is basically impossible not to meet if you’re there for several hours.

Dinner at Boat Quay, a strip on the water with bars and restaurants. This felt like a place that actual Singaporeans might go.

For night 2 we stayed at the Dorsett Singapore, near the Chinatown area. It was much cheaper than the MBS (around $150) and still p nice.

Early flight to Hanoi (3.5 hours). Checked into La Siesta Central Hotel, which I could not recommend more. Their level of customer service and interest in us having a good experience was actually shocking. The breakfast was next level, and you could sign into Netflix on the room TVs.

Our tour guide took us around Hanoi to three historic sites: The Temple of Literature (a temple of Confucius from 1070), the Ho Chi Minh mausoleum (they are like really obsessed with Ho Chi Minh there), and the Temple of Jade on Hoàn Kiếm Lake (another Confucian temple in the middle of the lake in the Old Quarter).

Dinner at Hungry Hanoi, a standard restaurant in the Old Quarter. Most places we ate were very similar to each other, but very good, and cost about the price of a Seamless order for one.

If you’re there Friday through Sunday, the street around the lake becomes a walking street at night where people eat, shop, play music and games. I highly recommend taking advantage of the souvenirs in Hanoi, because they sell bags and earrings that would be anywhere from $50-$300 on Revolve, but cost like three dollars and literally look exactly the same.

Food to try: Egg coffee. Sounds weird, but they somehow whip egg yolks and condensed milk into the coffee? It works.

We drove about two hours for a day trip to Ninh Binh, a province near Hanoi with a ton of cool sh*t to see. We went to three places, all a quick drive away from each other.

Hoa Lư: the ancient royal capital of Vietnam to visit two temples from the 10th century

Tam Cốc-Bích Động: first we visited a three-story pagoda built into a mountain, then took a boat ride through cliffs, mountains, and caves

Lunch at Spring Garden in Ninh Bình (guide brought us). Dinner at our hotel in Hanoi before leaving for the train station.

The overnight train is called the Chapa Express and truthfully I’ve had worse experiences on the LIRR than this, which was surprisingly solid. Each cabin holds four people but you can buy out the empty spots for $33 per bed, which we did bc you know, serial killers.

Our guide picked us up from the train, and then we made the first big mistake of our trip, which was driving two hours to go to a “local market.” It was apparently one of the bigger markets in Vietnam so I’d hoped to find more straw bags and Revolve jewelry, but it turned out to be more emphasis on “local” and less on “market.” It was basically where people come to buy actual necessities like clothes and food for the week. It was a good glimpse into real life, but personally I wished it didn’t involve driving two hours in the opposite direction.

Drive to Topas Ecolodge in Sa Pa. OK I have no words to describe this place. It was, no exaggeration, the most beautiful, best place I’ve ever been in my life. It’s an ecolodge located in the middle of nowhere among rice paddies and mountains. Look at this f*cking place.

We spent the afternoon getting drunk on pool food and taking photos of ourselves (every guest seemed to devote at least two hours to this process per day). Dinner at the lodge was a hot pot and glasses of alcohol.

Another epic breakfast. Stayed at the pool all day. Got a massage that was so good I got another one immediately after. For dinner we signed up for the BBQ option thinking this would be like a bunch of grilled sh*t and all the guests mingling, but it ended up being a five course meal and wine pairing in a private gazebo that was just us and one other couple, where food was being cooked in an outdoor kitchen a few feet away. I was living.

I felt sick and didn’t go anywhere this morning, but my fiancé took a trip to hike the rice paddies to one of the local villages to chill with some actual Vietnamese people, the women of the Red Dao tribe. He said it was great. The lodge will organize all sorts of activities for you if you ask, but I chose to do nothing the entire time I was there.

Check out in the afternoon. Five hour drive to Hanoi. Dinner at Duong Restaurant aka more spring rolls and pho.

Sooo on this day we were supposed to go to the coast of Vietnam and stay at a resort called Monkey Island. Unfortunately, as we were halfway there we got news that there was going to be a typhoon in the area and it would be dangerous to go. In the midst of that situation, the bus we were on fully broke down and we got stuck on a highway. This post is already insanely long so I’m gonna skip storytime.

To give you an idea about Monkey Island, the trip that could have been: this is an all-inclusive resort on the beach in Lan Ha Bay. According to the original itinerary, we were supposed to go boating, see monkeys and chill on the beach. Amazing.

That night our hotel was full so we stayed in the O’Gallery Classy Hotel. Don’t @ me on the hotel name, idk either. They also had great customer service and it was only slightly less good than our original hotel.

It was Forrest Gump level rain so we got 90 minute massages for $26 dollars (!!!) in the afternoon. By this point I’ve hit my pho limit, and we had dinner at French restaurant called La Badiane. This was some fine dining gastronomy sh*t and was seriously amazing.

Leave for the 36 hour journey home. Rough end to an overall amazing trip.